SP-15 loads fell off 1,700 MW yesterday as temps finally began to fall in earnest.   Week-on-week demand fell as well, by 1,089 MW, though demand remains elevated over last year by as much as 1,801 MW yesterday.  With light load bottoming out 200 MW lower than Monday, the daily average dropped by more than 1,000 MW total.

Phoenix cooled off six degrees yesterday, apparently enough to ease demand by just over 600 MW.  Loads have also fallen heavily week-over-week, by as much as 1,800 MW as of yesterday’s high.  The daily average for the 27th fell 750 MW compared to the day before, and now sits just 100 MW above the weekly average.

Demand in NP has crashed compared to a week ago, down by just under 5,000 MW, and now falling below last year’s levels by as much as 2,400 MW.  Northern California will heat up moderately over the next week, but nothing dramatic enough to see loads return to last week’s levels.

Checking in on degree days as we wrap up June, and you can see some of the biggest anomalies are coming from SP, particularly in Burbank and San Diego where their typical neutral degree day is more sensitive to changes.  Sacramento had the largest percentage change from average with an increase of 28%, while Kalispell had the largest decrease, dropping 27%.

In a departure from yesterday’s forecast, Seattle will trend a few degrees cooler over the 4th of July holiday before moving back into the high 70’s for three consecutive days.  This puts the forecast up to 6 degrees higher than yesterday and five degrees above normal.

No surprise that Portland is trending warmer than Seattle, and they too are seeing a second warm-up on the horizon with temps jumping into the mid-80’s by the 7th.  This current forecast calls for just two days below normal over through Mid-July.

Starting to see a trend here as once again, the 7th is warming up heavily over yesterday’s forecast, this time coming in six degrees warmer at 111.  This also marks potential for a new 10-year high (currently on pace to tie the old record).  Las Vegas isn’t forecasting any days under normal through the next three weeks.

Burbank on the other hand is continuing to forecast below normal until the beginning of the second week in July.  In a change from yesterday, however, the 2nd and 4th were bumped up 7 degrees warmer.  Still as much as 5 degrees below normal, but back into the 80s at least.

San Jose is staying mild, so it’s up to Sacramento to drive demand.  With forecasts in the upper 90s from the 29th through the 1st, it’s certainly doing its part.  Though keep an eye on the 5th where the forecast is now pacing 8 degrees cooler than expected yesterday, and now 6 degrees below normal.  That outlier aside, the rest of the forecast is calling for above-normal temps, especially moving in the latter part of the second week in July.

No significant day-to-day changes in the 10-Day forecast which is now bottoming out at 17,780 aMW by the 6th of July.  This amount to a 4,282 aMW decline from today.  We are also seeing a convergence in the difference with STP which has the largest variance on the 29th at 650 aMW, but we see that drop to just 230 aMW by the end of the forecast. 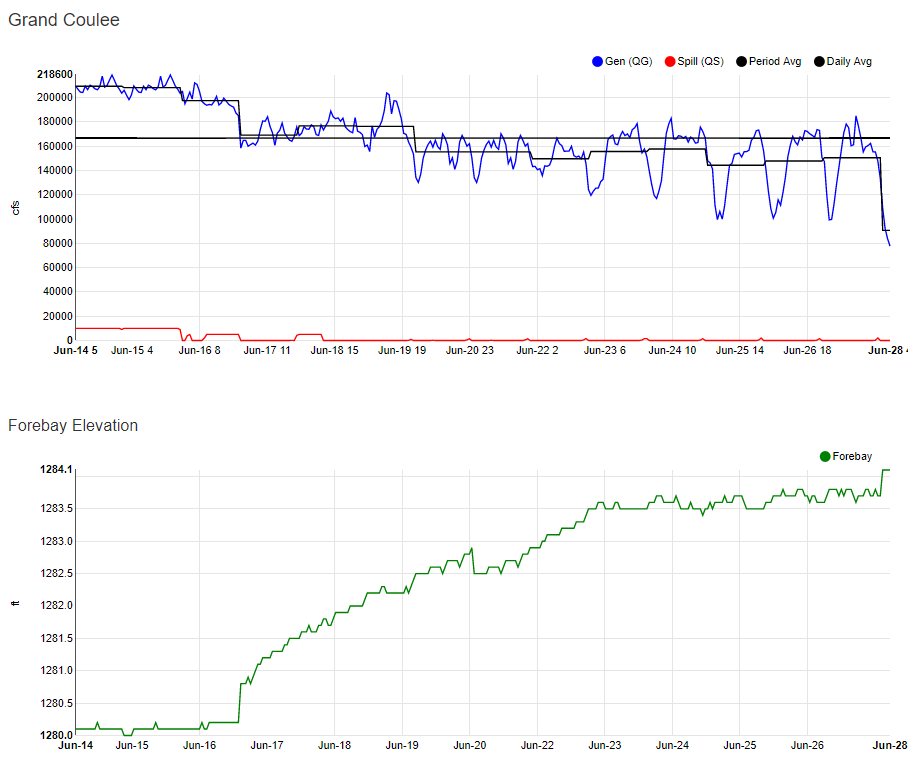 Grand Coulee elevation jumped 0.4′ yesterday to bring the reservoir to 1284.1 feet.  Meanwhile, generation dipped to its lowest level in weeks earlier this morning, falling below 78,000 CFS.

As Grand Coulee attempts to finish its summer fill, one of its main tributaries has dropped to a trickle over the past few weeks.  The Spokane River is flowing at just 4300 CFS as of today, a 43% decline from the average for June 28th, and 14,000 CFS off from the max.

Same story on the Pend Oreille as well where the Box Dam is seeing flows drop to 34% below normal, this after spending the majority of spring well above average,

Just to give a little more detail to that PV increase I’ve linked to the Gas Demand Chart.  While demand really started to ramp up in late-May, you can see how the 115+ daily highs over the past week have really done its damage as demand peaked at 1741 MMCF on the 22nd. 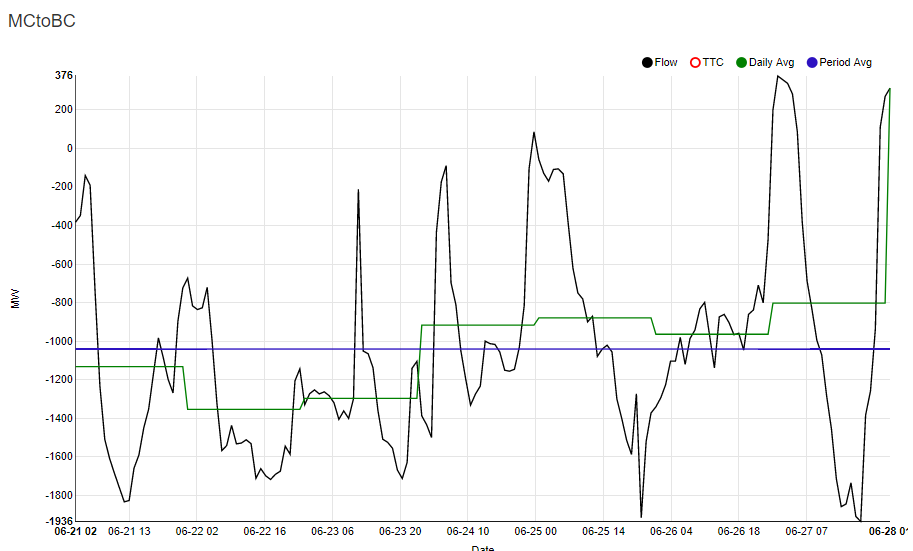 There was a massive swing in flow yesterday afternoon on the MC-BC line where we saw a peak at 376 MW followed by a rapid decline to -1936 MW by 7:00 PM, only to move back the other direction by this morning at 313 MW.  Add it all up and you get a daily average of -803 MW, actually the highest average we’ve seen in a while, despite the low of -1936 MW. 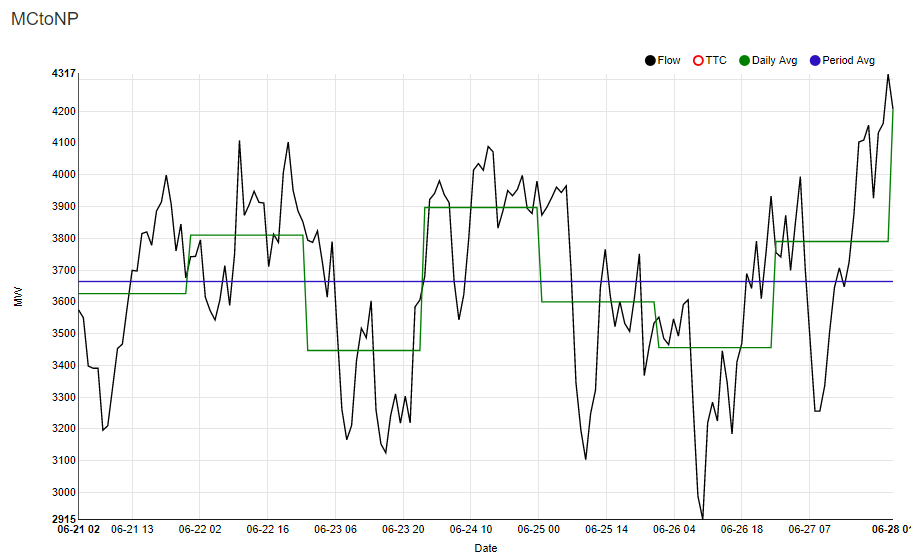 As Mid-C began flowing north into BC, it also increased flow into NP where we saw a new weekly high at 4,317 MW coming in at midnight.  This also increased the daily average by 350 MW over the day before.