Very hot in Mid-C yesterday (for the Northwest, anyway) and this was reflected in demand.  Avista showed the largest day-on-day jump with a 757 MW increase (up nearly 80%), where the extra 8 degrees was enough to seemingly kick on every AC unit in the region.  Seattle and Portland also had an uptick in demand, but not nearly at the same rate.

Loads slowly fell off moving through last week, but saw another uptick over the weekend as extreme heat barreled through the region.  Demand is up 2,126 MW week-on-week, and up 1,593 MW year-on-year.

Much calmer in NP on the other hand as temperatures cooled down and loads came off just under 4,000 MW week-on-week as of yesterday’s high.  Year-on-year demand was also down to the tune of 900 MW.

With heat persisting in PV, demand is predictably following suit.  Demand peaked at 17,194 MW yesterday, up 1,488 MW week-on-week, and up considerably over last year by 1,763 MW.  Yesterday’s daily average sat nearly 1,400 MW above the weekly average. 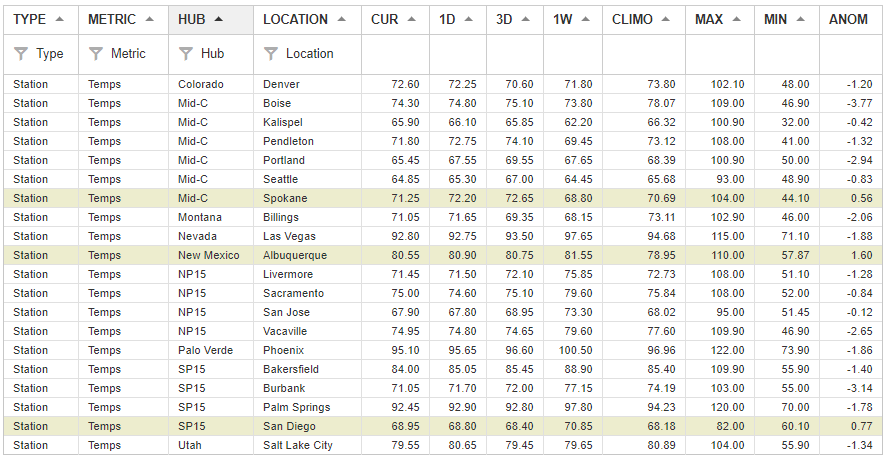 We are seeing a massive shift in forecasts compared to last week as a clear majority of stations are showing below-normal anomalies for the first time in a while.  Burbank’s average daily temperature is forecasting a mean daily drop of 3.14 degrees, the largest variance in California.  San Diego on the other hand is forecast slightly warmer with an anomaly of 0.77 degrees.

A quick look at the Max Temp chart and you can easily see why Burbank is showing cuts to its forecast.  Today marks the last day of 90+ daily highs for the foreseeable future as max temps are set to plummet down to the mid-70’s by early next week.  The forecast for the 4th of July was reduced 6 degrees day-on-day, and the 5th even further with a 10 degree drop in the forecast.  Temps are expected to eventually break above normal by the 7th.

San Diego was one of the only stations with above normal forecasted temps, but you can see that anomaly is likely to fall off tomorrow as it is being propped up by today’s high of 82 (ten degrees above normal).  One more warm day tomorrow (77) before the following 10 days hover around normal.

It’s not much of a reprieve but Phoenix is showing the first signs of below-normal highs in seemingly weeks as the 3rd is forecasting a chilly high of 105, two degrees below normal and four degrees below yesterday’s forecasted high.  Until then, however, two more days north of 110 degrees.  For now, July looks like it should be settling much closer to normal.

San Jose can mark a high of just 75 tomorrow, five degrees below normal and a far cry from the 103 high we saw 8 days ago.  June is wrapping up with a whimper as we shouldn’t see San Jose crack 80 until the 5th, and even that is forecasted to lead into another cooldown.

It’s not entirely cool in NP, at least not by the end of the week, as Sacramento should flirt with triple digits again on both Saturday and Sunday.  This weekend’s forecast also marks a substantial change from yesterday’s forecast, particularly on Saturday which is now projected 10 degrees warmer than it was yesterday.  Highs are expected to plummet from there however, as the 3rd could be seven degrees below normal at a comfortable 84.

We’ll move up I-5 into Portland which is coming off a record-tying high of 101 yesterday, but has already cooled off considerably as today is expected to peak at just 77 (four degrees off from yesterday’s forecast, though still three degrees above normal).   No extremes are expected any time soon, though there are a few 80 degree days scattered over the next couple weeks, with the first two showing up this Thursday and Friday.

Here is a bit more detail on yesterday’s high of 101 with the Weather Actuals chart as 2017 eclipsed the next hottest year by 10 degrees and finished a massive 23 degrees above normal.

Spokane is set to continue well north of neutral degree days with forecasted daily highs above normal until early next week.  Today’s high of 94 is 16 degrees above normal and just a hair off from the 10-year high of 95.  In a change from yesterday, the tail-end of the week is projecting 3-to-4 degrees warmer, and still 10+ degrees north of normal.

Slight week-on-week changes to forebay elevations with Libby leading the way at 4.66′, while Wells and Hungry Horse each added just over 2 feet compared to last week.  As expected, almost no daily changes were reported, at least nothing of significance.

Grand Coulee is seeing its final approach toward capacity slowly begin to curve as the elevation currently at 1283.8′.  This comes in nearly five feet below the same date last year (the reservoir hit 1,287′ by the 19th in 2016), though pacing ahead of 2015, but again falling behind 2014 which had reached 1,287 by the 22nd.

The new 10-Day RFC forecast dropped even further below STP to 18,417 MW, close to a 400 MW difference.  This also marks a continued decrease from forecasts late last week which were much higher (July 4th is coming in nearly 1,300 MW lower, for example).

ISO Gas outages increased roughly 700 MW last week before finishing at 5,208 MW, still down from the two-week high of 5,904, but also a reverse of the downward trend we had been seeing.

The rest of the sources had mostly seen net returns over the week as hydro dropped 160 MW from Monday, and the others stayed relatively neutral. 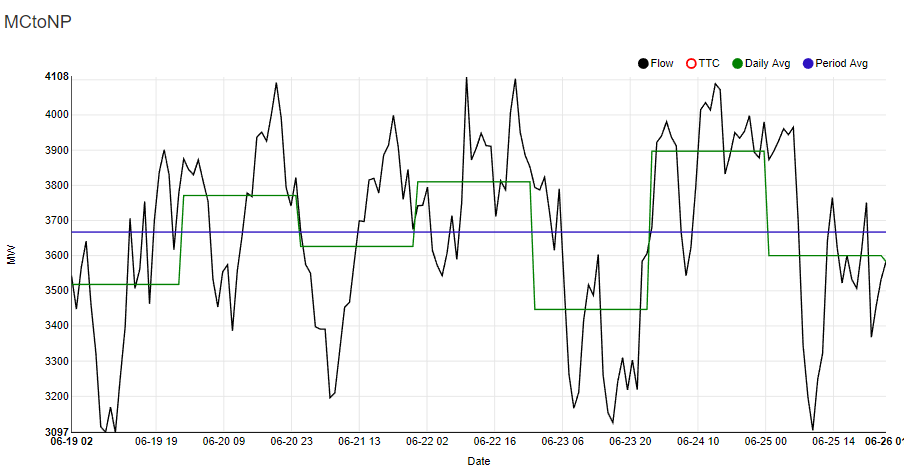 Flows bottomed out at 3,103 MW late morning yesterday and never made a full recovery thereafter with a high of just 3,765 MW in the afternoon, down nearly 400 MW from the day before.  This also brought the daily average flow below the 7-day average. 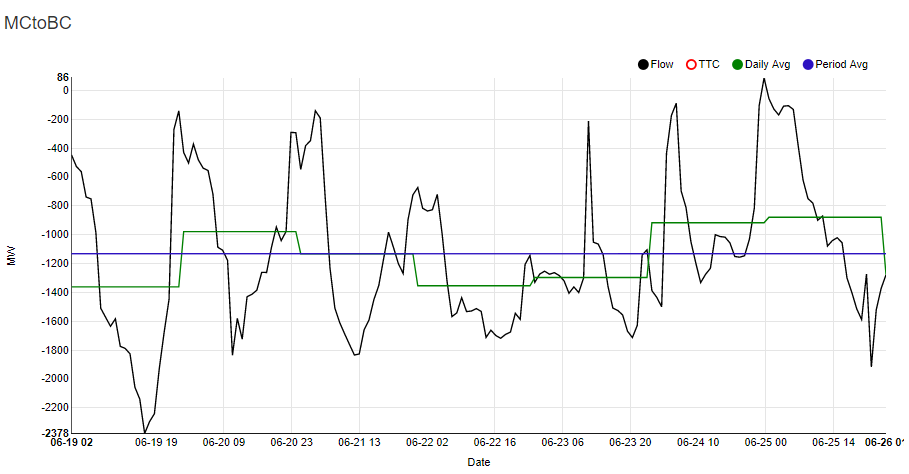 The hottest day of the year in Mid-C actually saw decreased southerly-flows as the daily average moved from -917 MW to -879 MW, and managed to touch above 0 (at midnight Sunday) for the first time in well over a week.  Flows hit their lowest point at -1,916 MW at 10 PM last night.