Portland is bracing for serious heat this weekend where Sunday could reach into the upper 90s with a projected high of 97, preceded by Saturday’s 95.  10-year highs will be smashed from the 23rd-25th is the forecast holds true.  This heat wave is a few degrees warmer than what was forecasted yesterday.

Seattle is trending a bit in the opposite direction as the most recent forecast is cooler than yesterday’s.  Still hot for Seattle at 85, if you have AC in your house, it will be running.  Things will cool off rapidly thereafter as highs drop back into the 60’s by the 27th, potentially five degrees below normal.

Hades…err Phoenix was forecasted two degrees cooler today, but still well north of 110.  There is another peak set for Sunday at 116, ten degrees above normal and seven degrees above the previous 10-year high.  Another adjustment was set for late next week where the 1st is now projected at 113 degrees compared to yesterday’s forecast of 106.

Looking at Phoenix Actual Temps you can see just how far ahead of previous years the past several days have been.  2017 set new 10-year highs each of the past three days.

Southern California is set to drop into the 80’s tomorrow after a long stretch of 90+ days, but that relief will be short lived as another heat wave should barrel in on the 25th where the high could reach 94.  From there, sustained below-normal temps could dip down as low as 75 by the end of the month.

It’s still going to be hot today, but San Jose will see a steady slide back toward the mean following today’s high of 95, and eventually settle back into the 70’s by next week.  If the forecast holds true, we may not see 90+ days for weeks following this weekend.

Ultimately the same story in Sacramento, but with a high of 108 today (18 degrees above normal) and 101 tomorrow, it’s still worth noting on the blog.  As Sacramento cools off, we could see high drop down to 85 by the 29th, five degrees below normal for that day. 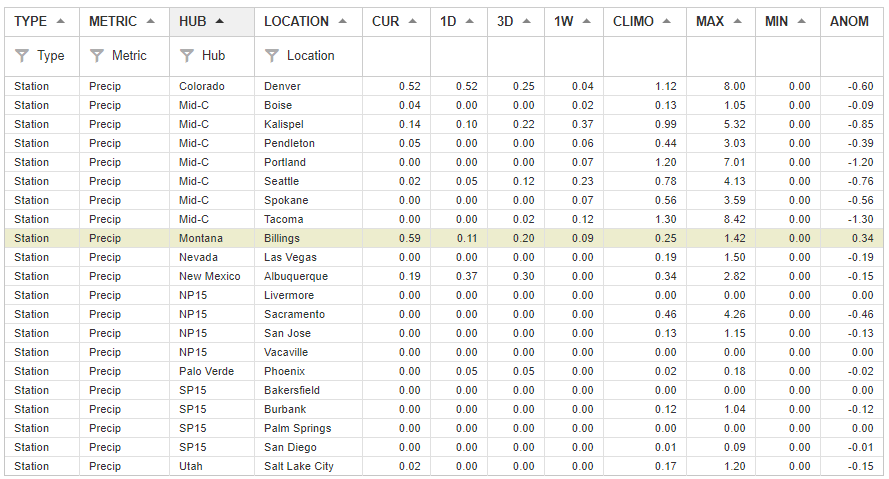 The west is still bone-dry aside from Billings and Denver thanks to forecasted thunderstorms.  13 of the 21 stations are forecasting zero precipitation over the next 10 days.

Here is a broad look at forebay elevations.  Most are within a few feet of capacity and those that aren’t are rapidly filling up.  Libby added just under 7 ft. in that past week, and Dworshak filled 3.76′ (putting it within two feet of capacity).  No reservoirs dropped more than 0.6′.

NP demand didn’t show any relief yesterday as it peaked above 20,000 MW for the third consecutive day.  Loads were also up 5,320 MW week-on-week, and 3,179 MW year-on-year.  Despite an increased peak in demand yesterday, the daily average actually fell 300 MW thanks in part to a lower light load.

Despite largely elevated loads in SP this year, demand actually fell 4,351 MW year-on-year thanks to a huge spike in 2016.  Demand remains up week-on-week by as much as 4,319 MW yesterday.  The daily average sat at 18,310 MW yesterday, basically unchanged from the day prior.

We are seeing some signs of life out of Diablo Canyon 1 as it rose to 12% today.  Columbia Generating Station is also heading back online, nearly back to 100% with 94% today. 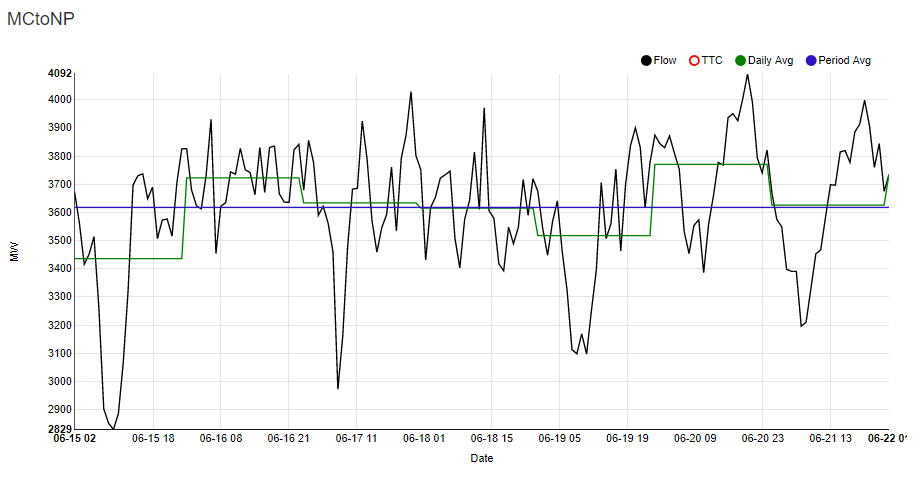 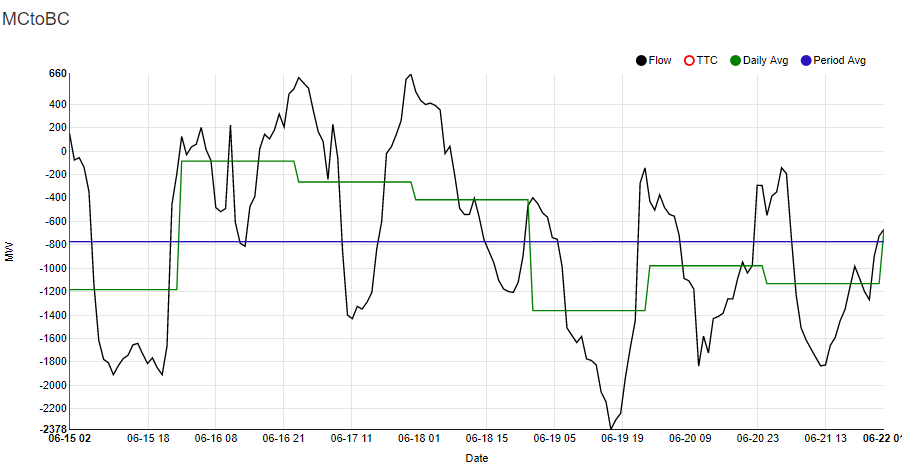 The Mid-C to BC line continues to trend South as the daily average finished at -1,132 yesterday, 350 MW below the weekly average.  The peak came close to neutral, but still only managed to hit -141 MW at 9 PM before falling back to -1,834 MW yesterday afternoon.