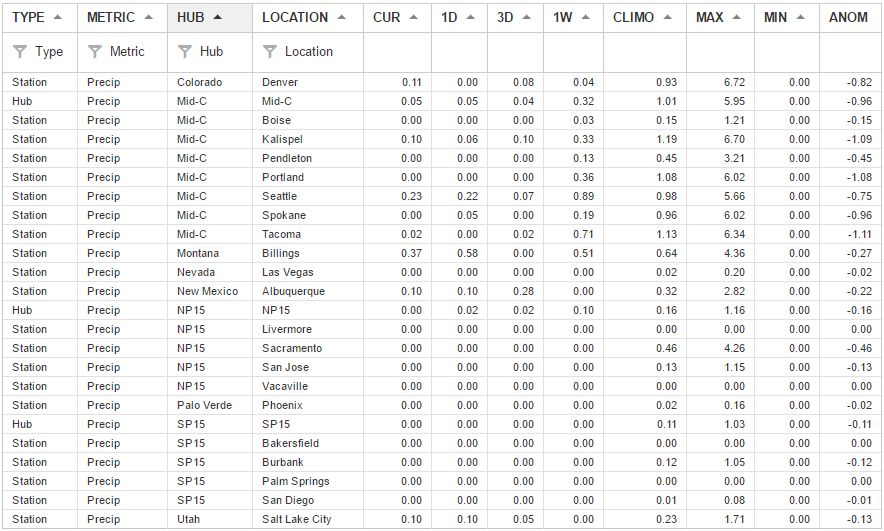 It’s the last day of Spring, but the precip forecast is all summer as the West is looking bone-dry for the foreseeable future.  Just 7 of the 21 stations are showing any amount of precip over the next ten days and the highest amount is 0.37″ in Billings. 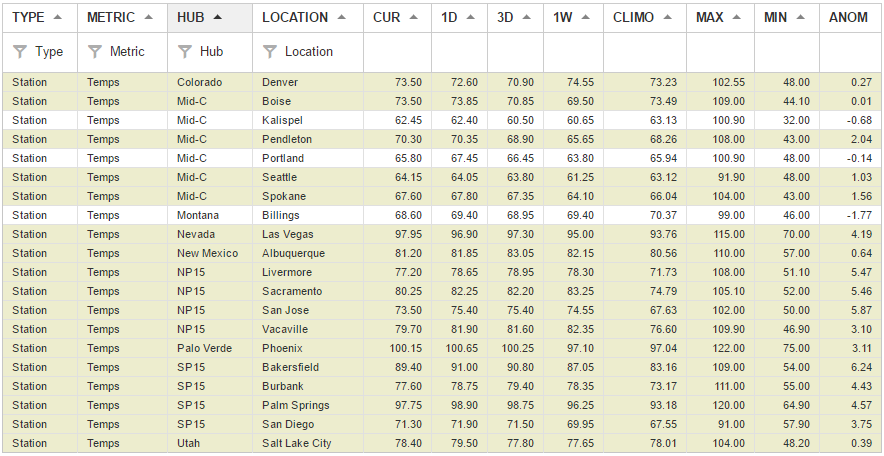 On the other hand, it’s hotter than normal throughout all but three stations.  Bakersfield leads the way with an anomaly of 6.24 degrees above normal in (terms of average daily temp), while the rest of SP and NP aren’t far behind.  Moral of the story, California is heating up.

Just a hair under 90 for San Jose today, but they should expect a high of around 97 by Thursday, just a degree away from a new 10-year high.  In a big change from yesterday, the area is showing another, albeit minor, heat wave beginning on the 30th which should eventually lead to a high of 88 by the 3rd.  This amounts to a difference of 15 degrees from yesterday’s forecast.

Head northeast and the heat rises quickly.  Sacramento is forecasting a high of 109 on the 22nd, equal to 20 degrees above normal and four degrees above the previous 10-year high.  Temps will reach triple digits every day through the 25th before dropping back into the 80s.  Yesterday had forecasted a cooling period around the beginning of July, but it’s now looking like the weather will move the opposite direction as the two forecasts differ by as much as 16 degrees on the 3rd.

Officially forecasting triple digits in Burbank tomorrow (three degrees warmer than yesterday’s forecast), preceded by a high of 99 today.  This extreme heat will be short lived however and the daily high will quickly drop back closer to normal by the 23rd.  In changes from yesterday, the 24th-27th is forecasting a few degrees cooler, especially on the 26th.

Asphalt will continue to melt through the 30th as Phoenix won’t see a daily high under 110 before then.  Today and tomorrow are still pacing at 119, three degrees above the previous 10-year high.  In fact, there should be a new 10-year high set every day through the 26th.

It’s certainly no Phoenix, but Seattle will get its first 80-degree day of the summer by Saturday with an expected high of 81.  Highs should stay in the upper 70’s through the 27th before plummeting back to the 60’s on the 28th.  If Saturday holds true at 81 it will tie the previous 10-year high.

Denver saw a forecasted low of 70 for the 24th as of yesterday, but that’s be readjusted up to 81, still 6 degrees below normal however.  Until then, Denver will have daily highs in the 90s through the 22nd.  The warm up following below-normal highs was also readjusted, this time three to four degrees cooler though the 27th is still forecasting as high as 94.

STP is forecasting above the NRFC through the 10-day forecast, with the largest difference on the 22nd where it is 799 aMW higher.  Today’s forecast is just a few aMW than yesterday’s through the remaining 10 days.  The overall forecast is forecasted to drop 4608 aMW over the next 10 days.

Southern California heat is being reflected heavily in demand as loads have increased a massive 7,717 MW week-over-week after peaking at 23,120 MW yesterday afternoon.  With temps set to reach even further into the triple digits (in Burbank anyway), we could see even higher loads over the next couple days.

NP-15 loads have gone through the roof as well with an equally impressive 7,923 MW increase week-over-week.  To no surprise, the daily average has also shot up over the same span of time, moving from 11,282 MW on the 12th to 16,839 yesterday.

Gas outages showed a significant increase for the first time in several weeks as 1,650 MW of outages were added over the past week.  Wind added 200 MW of outages, 60 MW of hydro returned, and all solar outages came back online (50 MW). 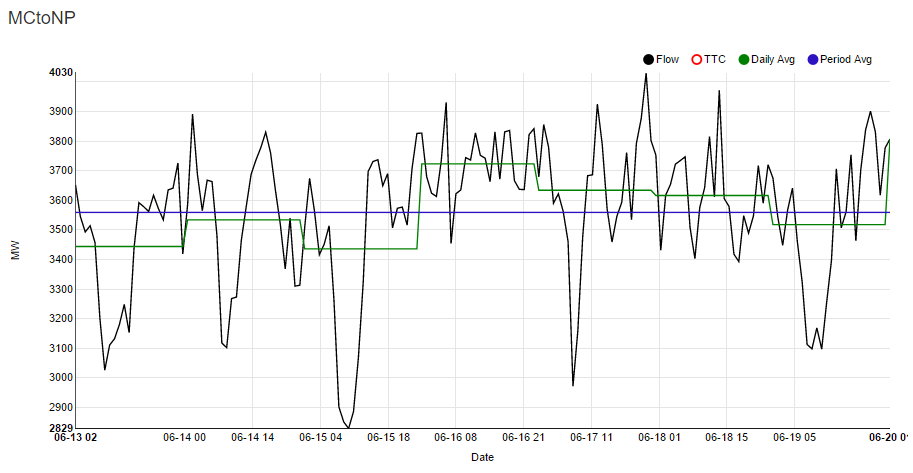 Flow dropped to 3,097 MW yesterday afternoon, about 400 MW less than the daily average, and enough to drop the day below the weekly average for the first time since last Thursday.  The weekly high was set at 4,030 MW late Saturday night. 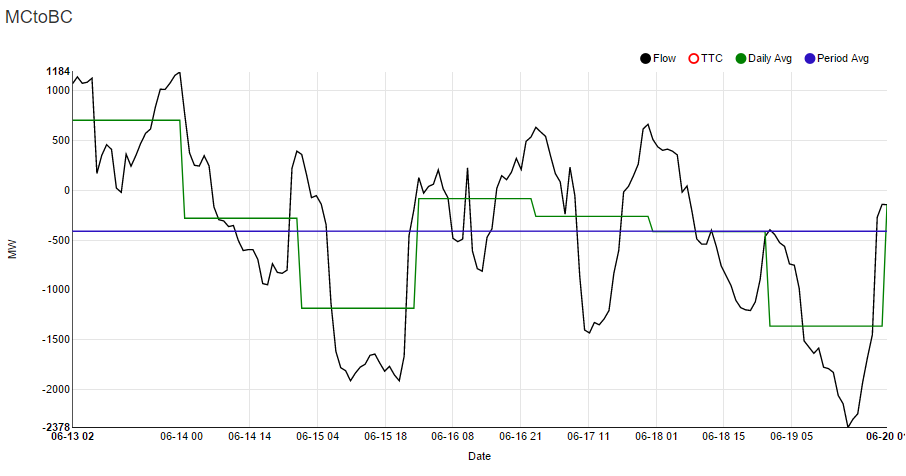 The bottom basically fell out from the MC-BC line yesterday as we saw flows hit -2,378 MW in the afternoon, pushing the daily average to -1,362 MW, 900 MW below the weekly average.  This was short lived however, as flows jumped back to -142 MW by midnight.  We haven’t seen a daily average moving north since the 13th (701 MW).