We’ll start off the day with a look at how some of the West’s reservoirs are filling up.  Pine Flat leads the way in California with an increase of 4.5 feet compared to last week.  Grand Coulee added 6.6 feet, while the BC reservoirs showed the largest spikes with Duncan and Mica adding 19.6 ft and 9.5 ft, respectively.

Pine Flat hasn’t seen these levels in years.  As of today, the reservoir sits at 90% capacity, while the next highest point from the previous four years was 65% in 2016.  Pine Flat typically peaks this week, we’ll keep an eye on whether that changes this year.

The reservoir is so full in fact, every day since June 3rd has set a new 10-year high based on the Max line in the Hydro Res chart.

Mid-Columbia Sideflows continued their decline after a small reprieve ending on Tuesday.  The Sideflows are now just a hair above average at 27,252 CFS after spending most of May and June well above.

SP-15 loads shot up yesterday with a 2,250 MW day-over-day increase.  This jump also amounts to an almost equal 2,261 MW week-over-week increase.  Southern California is heating up again and it’s showing up in demand.

Las Vegas’ forecast got bumped up a few more degrees moving into next week and is now forecasting highs of 114 for four consecutive days (20th – 23rd), putting each day at 15 degrees above normal.  10-year highs are projected to be set for basically a week straight beginning tomorrow, and the forecast doesn’t call for a return to normal until the end of the month.

No surprise Phoenix is still insanely hot, but even it is forecasting higher.  The 20th is now bracing for 120 degrees — 15 above normal and one degree hotter than yesterday’s forecast.  The most meaningful change comes in at the end of next week where the 23rd has been adjusted 7 degrees above what was expected as of yesterday.

Burbank’s forecast through the weekend remains unchanged and comfortably in the 90’s.  The one major adjustment comes in on the 22nd where yesterday’s forecast showed a significant drop, but that’s now been delayed one day and pushed even lower (to 75).  Temps are expected to stay within a few degrees of normal thereafter.

San Jose can set new 10-year highs on the 18th and 19th with its projected high of 94 and 90 for those two days.  The 18th is forecasting two degrees warmer than expected yesterday, and 16 degrees above normal.  Next week is looking 3 to four degrees warmer in the updated forecast as well.

Day-over-day demand increased in all hubs other than the SP15 where it dropped just one MMCF.  Different story week-over-week however as all hubs are up heavily, especially SP15 where it increased 242 MMCF compared to seven days ago.

Looking a little closer at the details of that jump in SP demand and you’ll see there happened to be a significant drop one week ago and yesterday happened to have a significant jump.  The week-on-week change is slightly artificially dramatic. 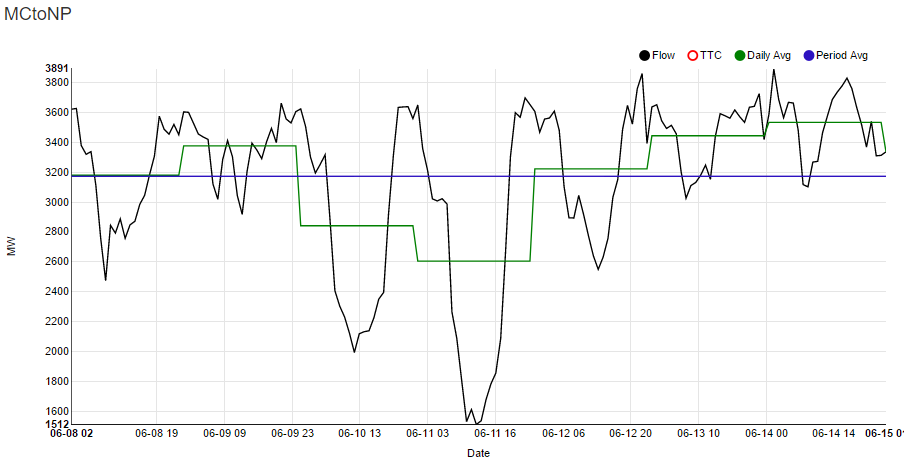 MC-NP flow is holding steady at well above 3200 MW daily averages, now for the third consecutive day.  We haven’t seen any hour dip below 3000 MW since Monday, while highs have reached beyond 3800 MW. 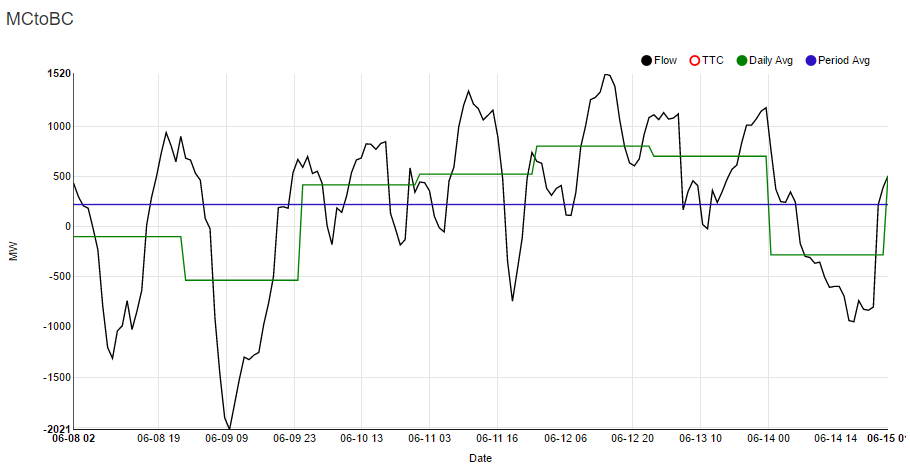 MC-BC on the other hand finally saw some notable changes beginning yesterday afternoon as flow dipped to its lowest point in a week (-948) and the daily average settled as a net importer for the first time since the 9th.