SP-15 loads increased compared to the weekend as expected, but remain down heavily compared to all of last week.  The seven-day difference amounted to a 2,322 MW decline at its peak, and the daily average fell 897 MW below the weekly average.  On the other hand, year-on-year demand is up by 564 MW, marking the first time in over a week that we’ve seen an annual increase.

Mid-C demand has stayed relatively calm compared to the highs we saw last week as loads pushed north of 22,000 MW.  Week-on-week demand is down 757 MW, but finished up nearly 2,000 MW year-on-year as of yesterday.  Yesterday’s daily average finished nearly identical to the weekly average at 18,619 MW.

With daily highs finally dropping out of the upper 100s and finishing in the 90s, PV demand has followed suit with a daily average yesterday 1,961 MW lower than exactly one week prior.  Peak demand fell sharply as well with loads falling 3,327 MW week-on-week.

NP demand recovered yesterday with a day-on-day increase of nearly 900 MW, but still fell 2,300 MW short of the week-on-week high.  2016 continues to show higher peak demand though that gap decreased slightly yesterday as the difference was 1,400 MW compared to upwards of 2,800 MW difference we saw last week.  The daily average fell below the weekly average for the third consecutive day. 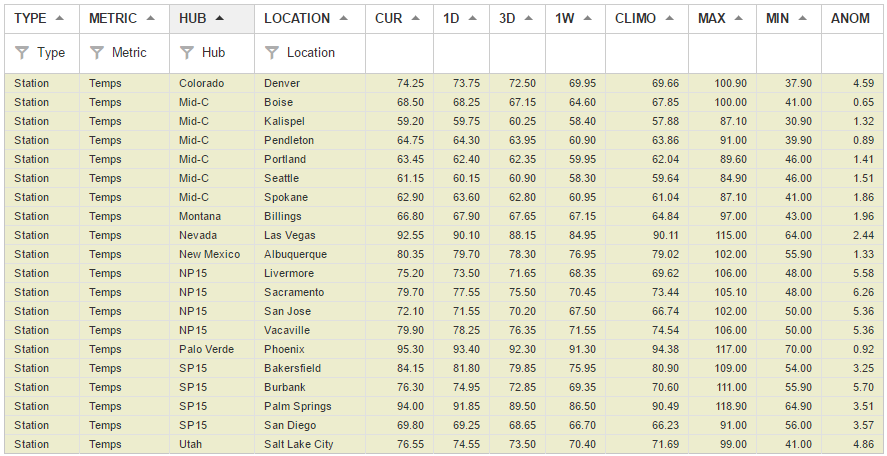 We don’t see this very often.  Every station that Ansergy observes is projecting warmer than normal average-temps over the next 10 days.  The largest anomalies should take place in NP-15 where all four stations are pacing 5 degrees above normal or higher.  SP-15 is slightly cooler than NP-15 in terms of anomaly, but still well north of 3 degrees.

Sacramento looks like it can set a new 10-year high on the 16th at 100 degrees, and though that might be the only new record, it should continue to warm up over the following two days.  At 102 (14 degrees above normal), the 17th is looking like the hottest day of the month.  Sacramento is forecasted stay above 90 until July.

It’s not nearly as hot in San Jose, but the separation from normal is still there.  Temps should peak at 89 by the 17th putting the area 12 degrees above normal.  From there we’ll see a slight dip as temps fall back into the low 80s marking a change from yesterday’s forecast which was seven degrees warmer on the 20th.  San Jose will stay above normal until the 26th of June.

Similar forecast in Southern California as well as Burbank is preparing for another foray into the 90s.  Thursday is expecting a high of 92, good enough for a new 10-year high for that date.  Temps will make a brief dip back into the 80s on the 18th before again reaching into the 90s, this time hitting 95 on the 20th (four degrees warmer than forecasted yesterday).

Interior Southern California has one last day in the double digits before taking on the full brunt of summer and an eventual high of 116 by the 19th.  This is still somehow short of the 10-year high (118), but comes in 13 degrees above normal, and six degrees above yesterday’s forecast.

Seattle on the other hand will likely get a few heating days before reaching above normal by the 18th, but even that only entails three days in the 70s.  The high of 75 on the 20th is currently marking the warmest day for the rest of June and moving into the first week of July.  Thursday’s low of 60 comes in at 10 degrees below normal.

One more city to note as Denver is set to reach daily highs in the 90s for at least a week, and what could be upwards of two weeks beginning on the 16th.  A couple changes from yesterday as most days from the 16th – 20th are trending a few degrees cooler.

The Spokane River dropped below 10,000 CFS for the first time over the weekend and currently sit at 6,800 CFS, just 44% of where the river was 10 days ago and nearly 5,000 CFS below average for this time of year.

The Mid-Columbia Sideflows showed their signs of slowdown with a steep drop beginning on the 9th where we saw flows go from 44,000 CFS to 29,000 CFS, a drop of 34% in just four days.  With no heat waves in sight, we should expect that number to make a steady decline through August.

The Sideflows’ high of 60,337 CFS on June 2nd marked the highest flow this decade and was followed by what looks like maybe the sharpest decline of the decade as well.  The 29,000 CFS recorded today is still well ahead of all years other than 2011.

The 10 Day River Forecast is showing a high of 28,264 on the 14th followed by a smooth decline through the remaining forecast.  This is a small decrease from yesterday and is also reflected in the rest of the 10 days as well.  STP remains well above the 10-day forecast. 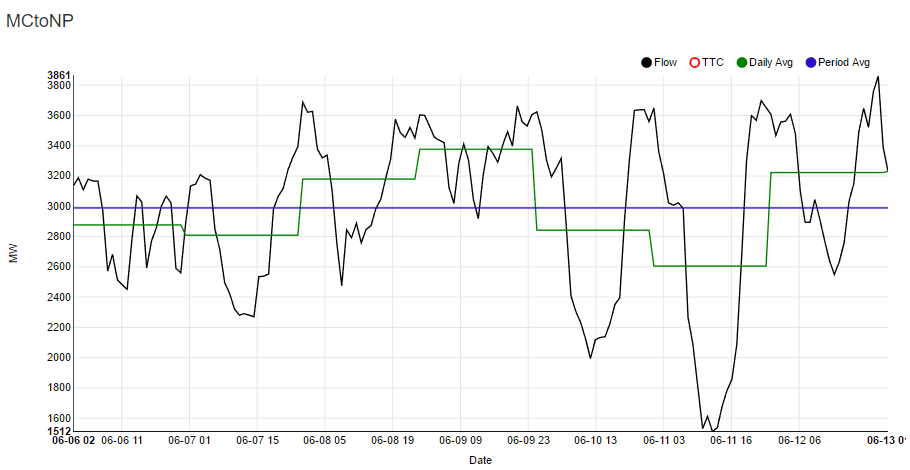 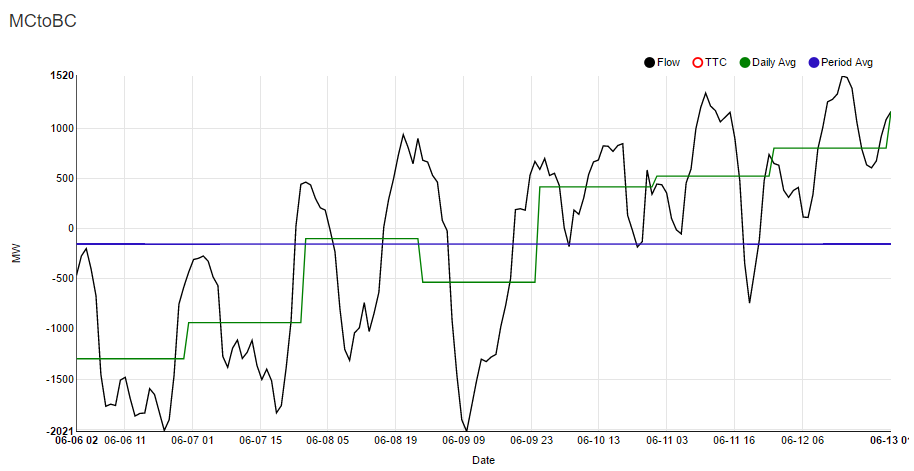 Aside from a small drop on the 9th, we’ve seen steady increases to average daily flow each day over the past seven, ultimately leading to a high of 801 yesterday.  Hourly flow also hit peak yesterday, coming in at 1520 MW.  After more than a week of negative flow, we’ve now marked three consecutive days of flow heading north.