SP-15 loads are up 2,419 MW week-over-week and are relatively unchanged annually with a difference of just 418 MW year-on-year.  With temps in the 70’s through the weekend for much Southern California, we should continue to see mild demand as well.

Mid-C had moderate increases to demand with a jump of 1,527 MW week-over-week, partially aided by 90+ degree temps in much of Eastern Washington and Oregon.  Loads are down 2,516 MW year-on-year however, and that difference should continue to grow as the Northwest cools off.

Looking at just Mid-C average daily demand, the difference in Winter and Spring loads is very apparent when comparing to last year.  With cool temps in the area for another couple weeks, we could see the two lines switch positions.

This week’s loads have peaked within 400 MW of each other for all three days, though demand remains elevated compared to last week by as much as 2,648 MW yesterday.  Year-on-year demand differed by close to 5,000 MW over the weekend, but that difference has now shrunken to just 800 MW. 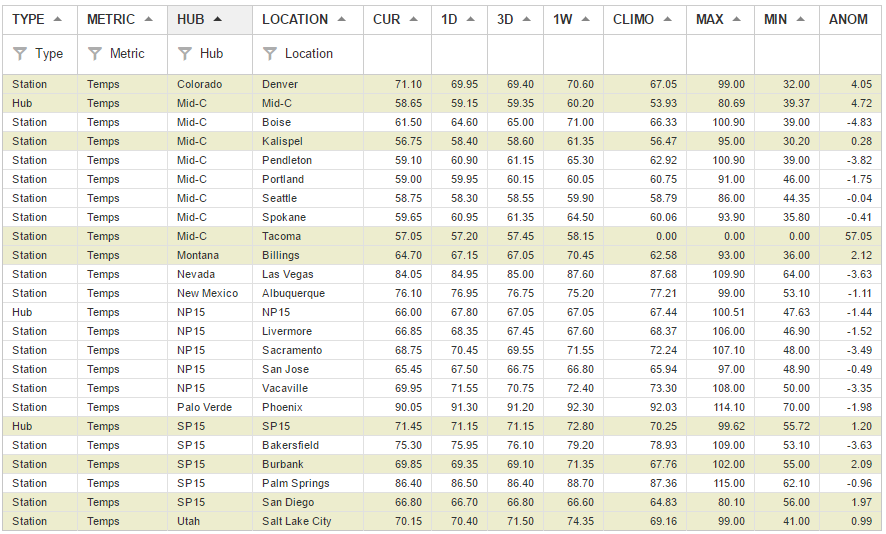 Mid-C is mostly pacing cooler, especially east of the Cascades, while NP-15 is below normal across the board.

A few changes to note for Seattle.  We are no longer expecting highs in the 50s for this weekend as the forecast jumped more than 6 degrees into the mid-60s.  Next week is now looking cooler, on the other hand, with the 14th dropping 7 degrees, now with a high of just 61.  Seattle should finally see above-normal temps by the 17th.

Portland is trending cooler than even Seattle as the forecast called for lower temps in eight of the next nine days.  The 11th had the most extreme change as the forecast is now seven degrees cooler.  Add it all up and Portland isn’t expected to reach above normal until the 16th.

It’s a tale of two forecasts in Burbank especially where there were large reductions in temps through the weekend before next week jumped up well above normal with temps approaching 90.  This weekend is now forecasted 4-6 degrees cooler, and next week had a difference as high as 12 degrees by the 15th.  Burbank could sit north of normal for ten days if the forecast holds true.

Potentially massive heat moving into Phoenix by the 20th where the current forecast calls for a high of 115 (15 degrees above yesterday’s forecast).  The high could stay above 110 for an additional day as well before dropping back toward normal.  Until then, the high will bottom out at 95 on the 12 before briefly touching 110 on the 16th.

It’s getting cooler in Northern California according to today’s forecast where the daily high is expected to drop to just 66 degrees on the 11th, a difference of 11 degrees compared to yesterday’s forecast.  From there, temps will make a steady increase above normal before reaching a peak of 92 by the 20th at potentially 14 degrees above normal.

Very small differences from yesterday on the front-end of the forecast, but we can see decent increases beginning on the 13th (where the RFC sees a peak of 28,382 aMW) and each day moving forward.  STP stays comfortably above the NWRFC 10-Day throughout the forecast. 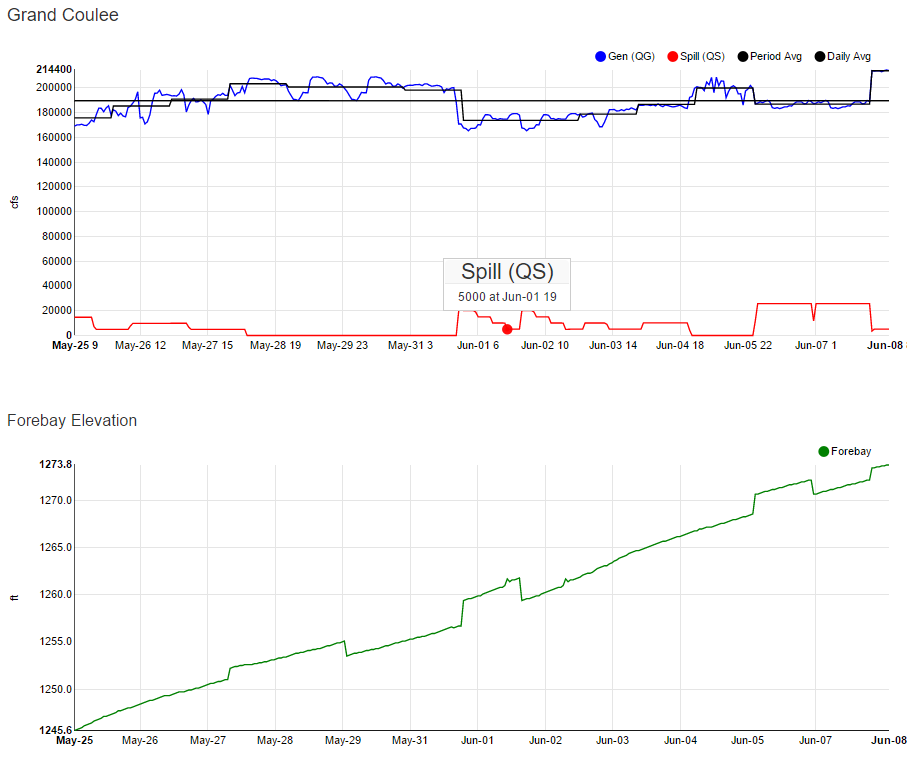 Spills in Grand Coulee picked up on the 5th but receding by early this morning, and as expected were replaced with generation which reached as high as 214,400 cfs today.  The current elevation sits at 1,273.8 ft, up nearly 17 ft since the 1st of the month.

We’ll check in with a few Northwest rivers, starting with the Salmon which looks like it peaked on the 2nd at 85,000 cfs, just beating the previous 10-year high for that date.

The Sideflows of the Mid-Columbia peaked a day earlier and are now seeing a sharper decline.

The Spokane River remains well below its high CFS flow from April and May, and though it did see a small uptick last week, it’s now moving just a hair above 10k at 10,045 CFS. 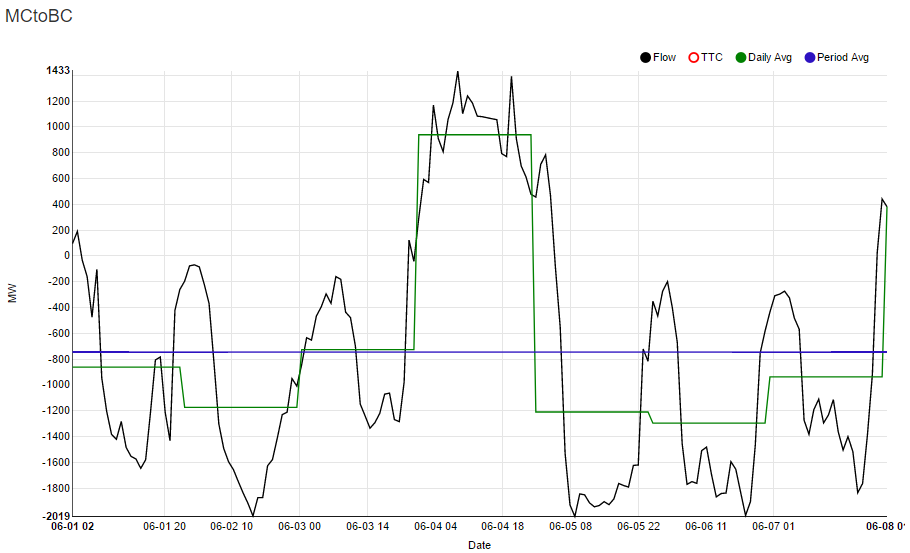 Two consecutive days of flows moving south after a huge jump on the 4th as daily averages for Tuesday and Wednesday fell to -1209 and -1296 respectively.  Early morning transmission flows reached back into positive territory today with a high (so far) at 441 MW. 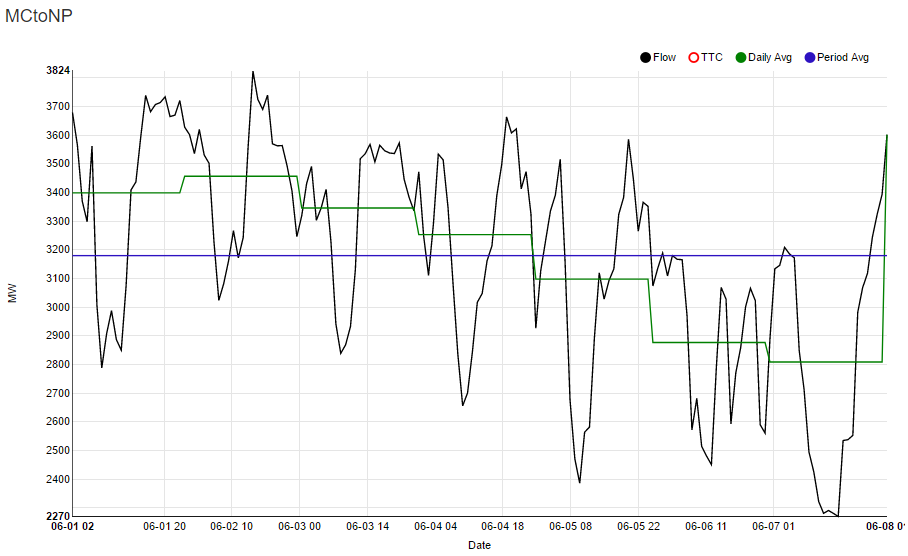 Flow dropped out last night where it reached a new floor at 2270 MW, more than 100 MW lower than any other daily low within the past week.  In turn, the daily average dropped to more than 350 MW below the weekly-average.  Flow recovered by this morning, however, as it peaked at 3602 MW at 1 AM.