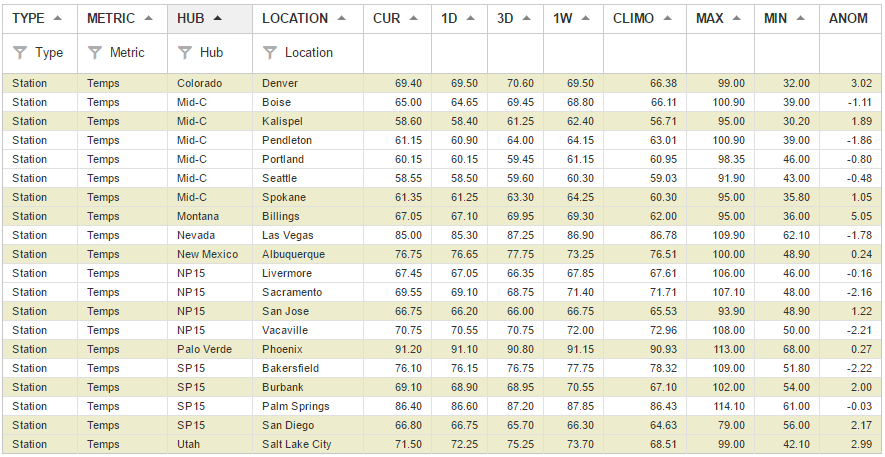 Mixed results for all hubs over the next 10 days, though only Montana and Colorado are projecting anomalies of more than 3 degrees (Billings and Denver). 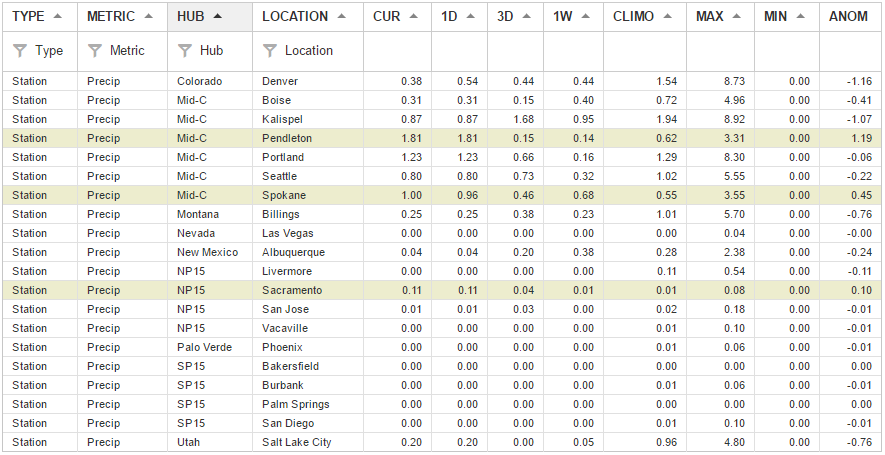 The precipitation forecast is a different story.  All SP15 stations are looking bone dry with virtually 0 precipitation in the foreseeable future, while everyone else not in Mid-C is expecting a trace amount of rain.  Spokane is expecting to double its normal amount and Pendleton could add more than an inch above normal. 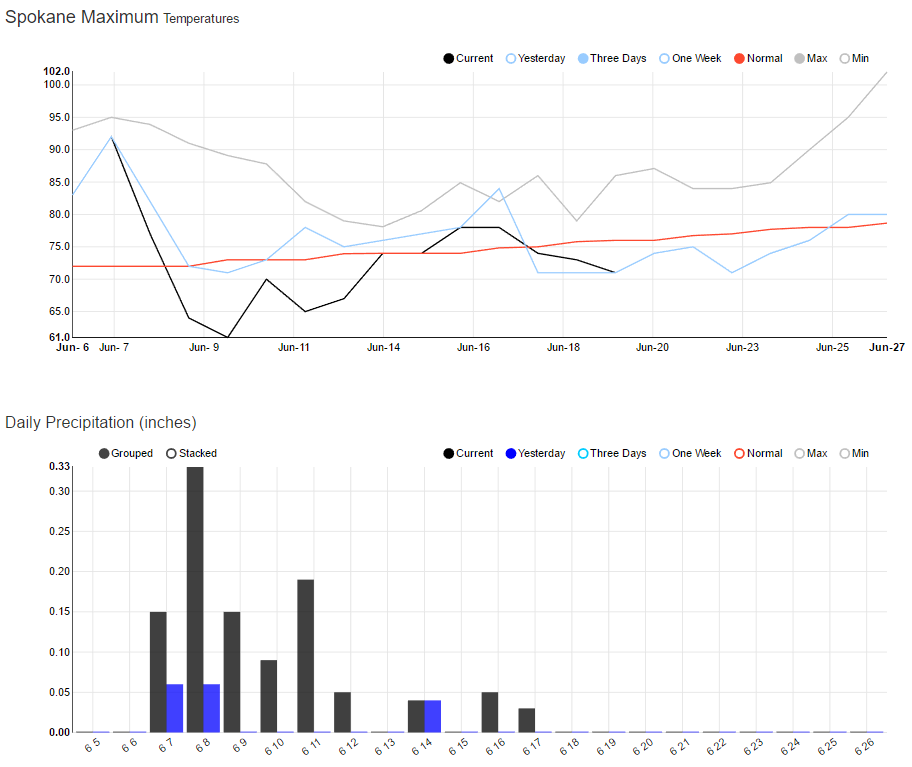 Speaking of Spokane, after Thursday’s high of 92 (just 3 degrees off the 10-year high), the forecast starts trending down in a hurry.  Just three days later we should see a high of just 61 (12 degrees below normal) and though temps will start to recover, there aren’t any forecasted days in the 80s until the last week of June.  Couple in significant rain on Friday and it will feel more like March than June.

Seattle won’t approach anywhere near the 90 degrees Spokane is set to get, but they will be in the upper 70s and start to target a neutral degree day.  That too won’t last long as temps will plummet to the upper 50’s this weekend before making a long drawn-out climb back to normal by the 16th.  The 11th and 12th should be noted as large decreases from yesterday (by up to 10 degrees).  There aren’t any 80 degree days in the forecast.

There was a noteworthy change to the Phoenix forecast as next week to a six degree drop into the mid-90s.  The 11th is now projecting a high of 96 which would equate to 7 degrees below normal.  This will be short lived however, as temps quickly get back into the triple digits and stay there throughout June’s forecast.

It wouldn’t be Denver without wild swings in temperatures, and this June forecast is holding true to that notion.  We’ll see temps move from the low-70s today to the mid-90s this weekend before again falling back to the 70’s just two days later (this second cooldown is a nine degree decrease from yesterday’s forecast).  The swings look like they’ll continue through the month, albeit without as dramatic changes as we’ll see over the next several days.

Still mild in Burbank though the 10th is looking a few degrees warmer than what was forecasted yesterday.  If this forecast were to hold true, we might not see above normal temps until the 25th which would also mean just a handful of days that even touch 80 degrees.  Things can change quickly when we start talking about three weeks out, but it’s probably safe to say we won’t see 90 degree days in within the next 10.

Notable changes to San Jose’s forecast are primarily coming in early next week as the 12th is now 8 degrees cooler, essentially extending the below-normal run by an additional two days.  The forecast is still calling for highs of just 69 on the 9th and 10th setting both day at 9 degrees below normal.

We’ll round out our western weather look with Sacramento.  Moving further into the interior doesn’t seem to help much as even Sacramento will get highs in the lower 70s, up to 13 degrees below normal.  We’ll eventually get highs back into the 90s but it could take more than a week.  Until then, Mid-C, SP, and NP are going to have several consecutive neutral degree days.

Grand Coulee had been hovering around the minimum levels up until the heat wave of two weeks ago.  Since then it has quickly recovered back up to average.  Add in three days of 85+ daily highs followed by three days of significant rain and we could see the slope move even sharper.

The NWRFC 10 Day Forecast seems to agree with the above sentiment as it now shows a high on the 11th at 28,705 aMW which amounts to an increase of 309 aMW from yesterday’s forecast.  From there we should see it slowly start to come off, but for now it looks like the heat combined with precip will have a decent impact. 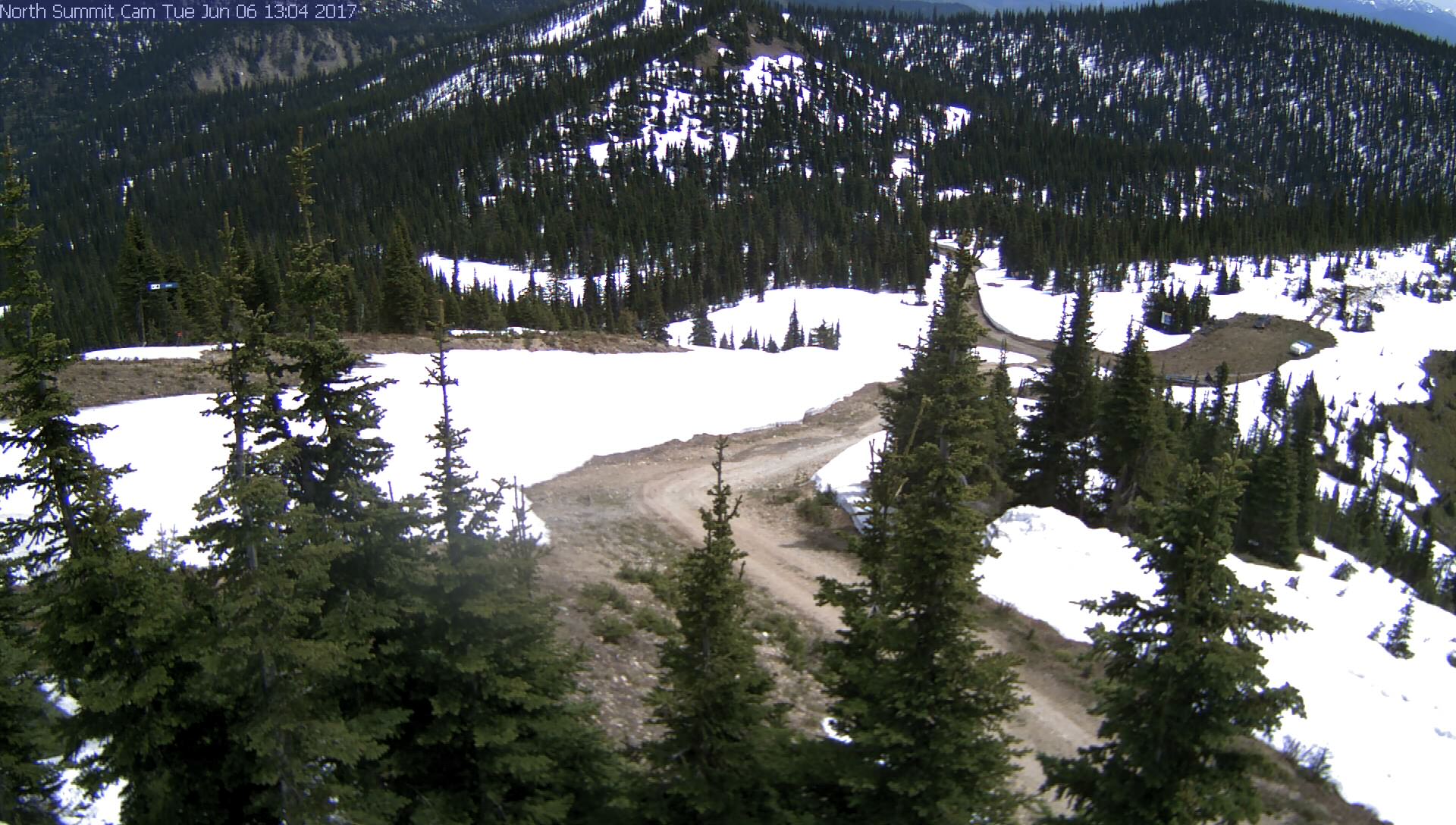 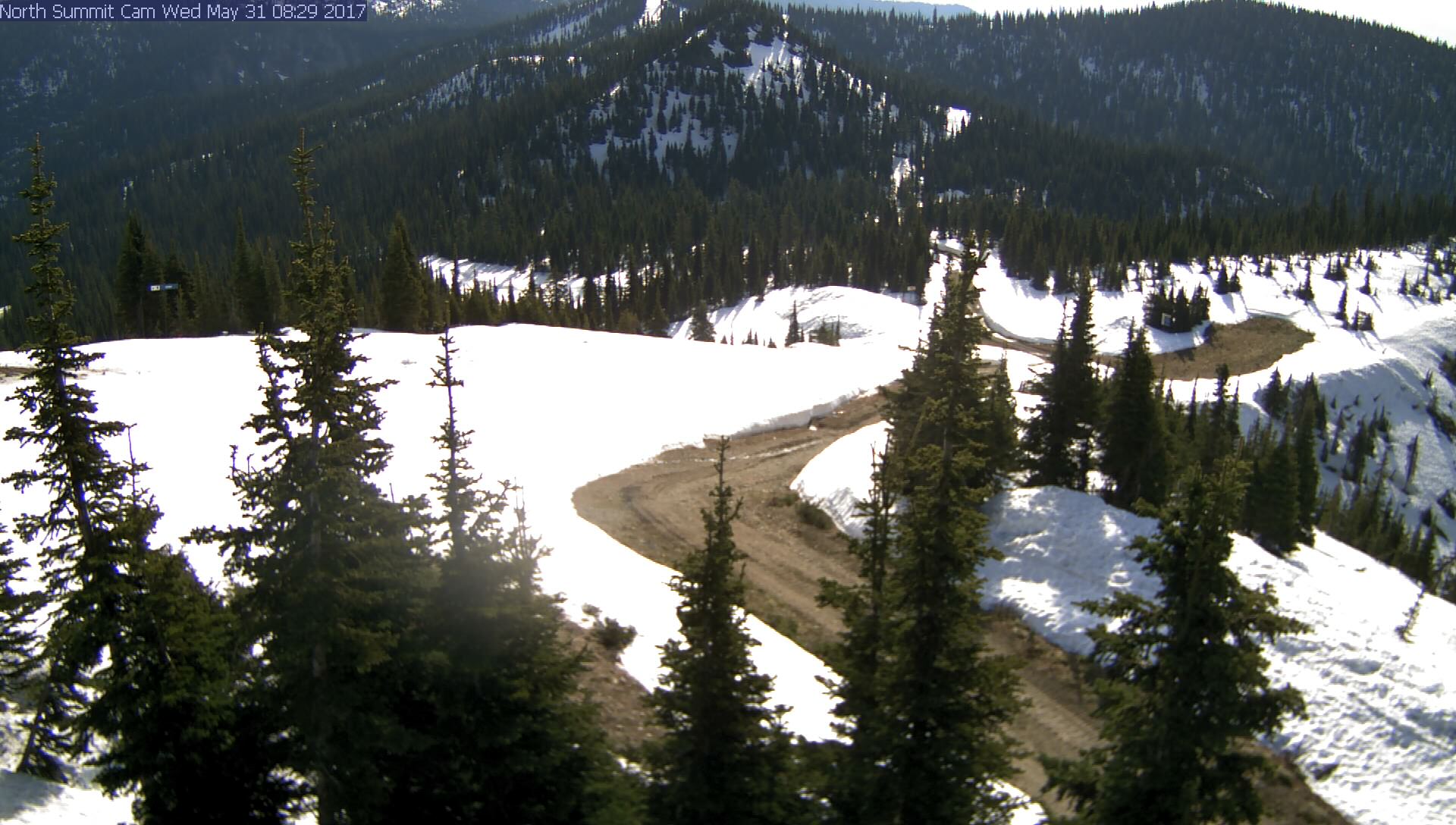 While much of the snow in Eastern Washington has already melted, Western Montana is holding on to its snowpack in the higher elevations.  That said, one week of heat did major damage last week as we can now easily see the larger snow piles start to collapse on themselves.

At 12.83″ in SWE, the Flathead basin is still well ahead of most years and more than an inch above normal, but the anomaly dropped from more than 2 inches a week ago.

If you’re curious exactly what units are coming back online, run up the Outage Summary report.  We can see that most of the return from this weekend came directly from one unit — TERMOELCTRICA DE MEXICALI CTG UNIT 2. 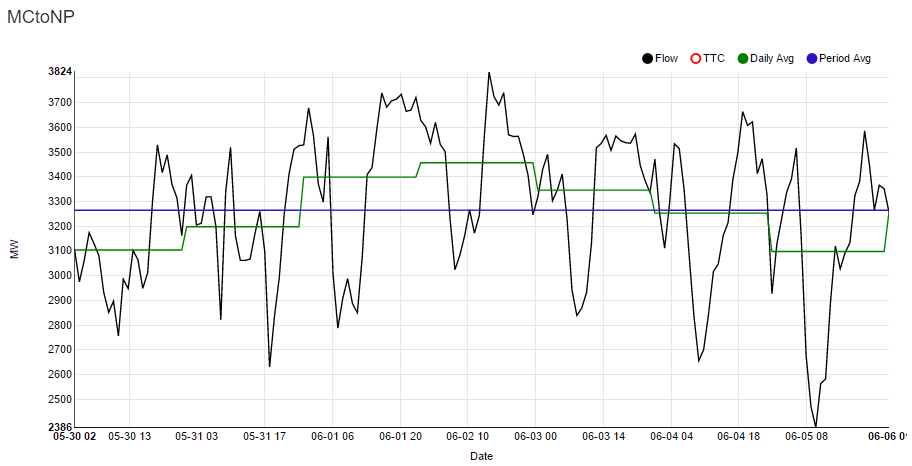 Flow dropped to a new week low of 2386 MW mid-day yesterday before rallying back above the weekly average by later that afternoon.  We’ve seen daily flow make a sharp decrease at 10 AM for three consecutive days.  The most recent drop was enough the bring the daily average below 3100 for the first time in a week. 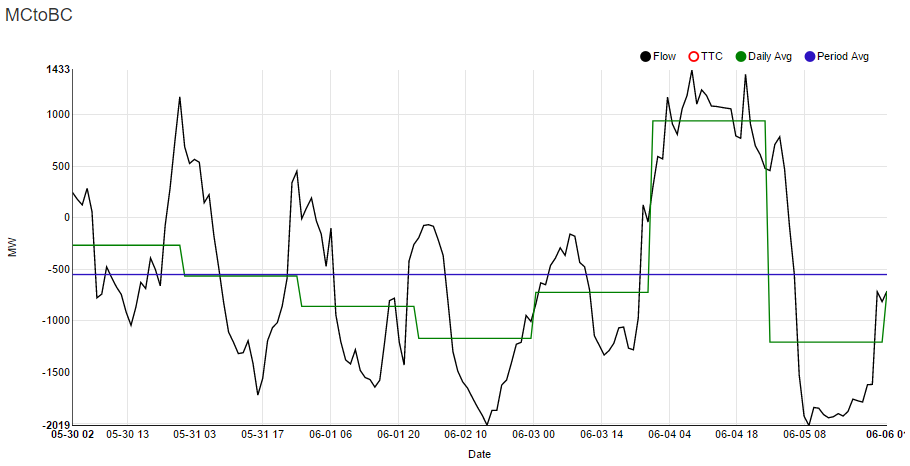 The MC-BC line made a hard turn north on Sunday, moving the daily average into positive territory for the first time in well over a week as the day finished at 939 MW compared to -726 MW the day before.  That was short lived however as yesterday’s daily average fell to -1209 MW, a drop of 2,148 MW.  The weekly average now rests at -553 MW.