SP-15 loads have held steady for the most part this week having peaked at 14,849 MW yesterday.  Demand is down considerably from last year with a difference of 1,638 MW as of yesterday.  Week-on-week demand is down 405 MW as temps moved closer to a neutral degree day.

Demand in NP is down 647 MW week-over-week, but the real change is seen in the year-over-year comparison where loads fell short by 3,394 MW yesterday.  With temps set to warm up considerably over the next several days, the year-on-year could switch positions.

Let’s check in on the first major warm up in Mid-C, first with Seattle.  Temps haven’t varied much from yesterday’s forecast for the next week (still on pace to shatter the 10-year record from the 21st-24th), but the following week is where we see major movement.  What was originally forecasted as large step toward cooler temps, we are now seeing temps persistently above normal.  The 26th is projected at 75 degrees, 10 degrees above what was shown yesterday.

Portland is getting hotter seemingly each time we refresh.  Temps are now expected to jump into the 90’s with a high of 91 on the 23rd which would not only beat the 10-year high by 17 degrees, but would also be within 1 degree of the all-time high for that date (1947).  In terms of deviation from yesterday’s forecast, the 26th is five degrees warmer, and like Seattle, Portland should have above-normal temps for an additional few days.

A couple changes to note in Phoenix.  The daily high is now forecasted to reach into triple digits for four consecutive days, a material increase over yesterday’s forecast.  Also, while it’s still a way out, we are now seeing signs of cooler period toward the end of the month (relatively cool that is, high will still be in the 90s).

Those of you waiting for more high-level snow runoff should be excited to see the latest Kalispell forecast coming in six degrees warmer compared to yesterday’s (for the 23rd of May).  The 24th is on pace to tie the 10-year high at 75 degrees, though temps are forecasted to fall below normal soon after (and look like they could stay there for a while).

Not a lot of day-over-day movement in the NWRFC 10-Day forecast, but you can really see a difference over the past five days, especially from the 19th on.  The forecast center is expecting a drop from 28,410 aMW to 27,578 aMW over the span of two days before holding close to there for the following week.  We could see aMW drop to 26,992 by the 26th. 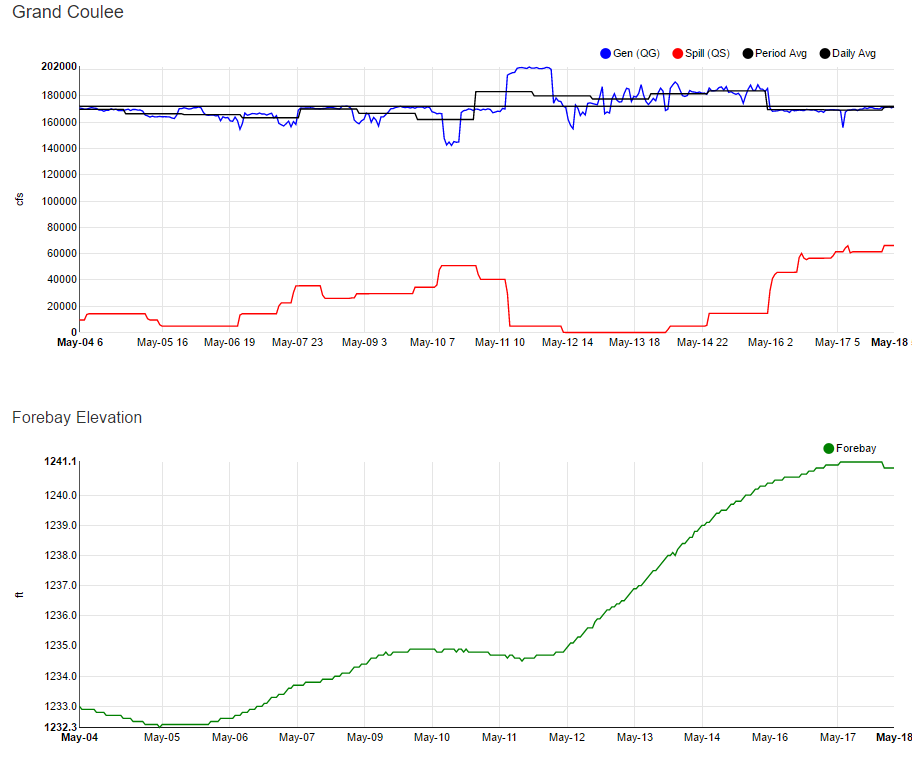 After steadily increasing the reservoir elevation over the past week, we saw the first decline (albeit very small ~ 2.5″).  Spills have increased from 0 CFS to 66,200 CFS over the same span of time.

The Spokane River is back on the decline since the 14th as flow has dropped roughly 1,000 CFS over the past four days.  Will be interesting to see how the decline in flow is affected by the coming heat wave.

The Salmon River basin had the largest day-on-day decrease after dropping from 13.51 to 12.86, double the decrease seen in Wash-West (which had the second largest drop).  Lower Snake, Clark Fork, and Clearwater all managed to add to their SWE levels, with Clearwater showing the largest increase at 0.49.

Day-over-day demand dropped in all hubs other than the Rockies.  Great Basin dropped roughly 12%, the largest percentage decrease, while SP15 saw demand drop 246 MMCF, the largest nominal decrease.  Np-15 and SP-15 are the only hubs with a decrease in demand measured year-over-year.

If you are looking for more detail from the table above, click on the Daily link from the report and check out the chart.  NP-15’s day-over-day drop can easily be seen, and it’s also worth noting that yesterday’s demand of 2,677 MMCF was its first time above the yearly-average since late March. 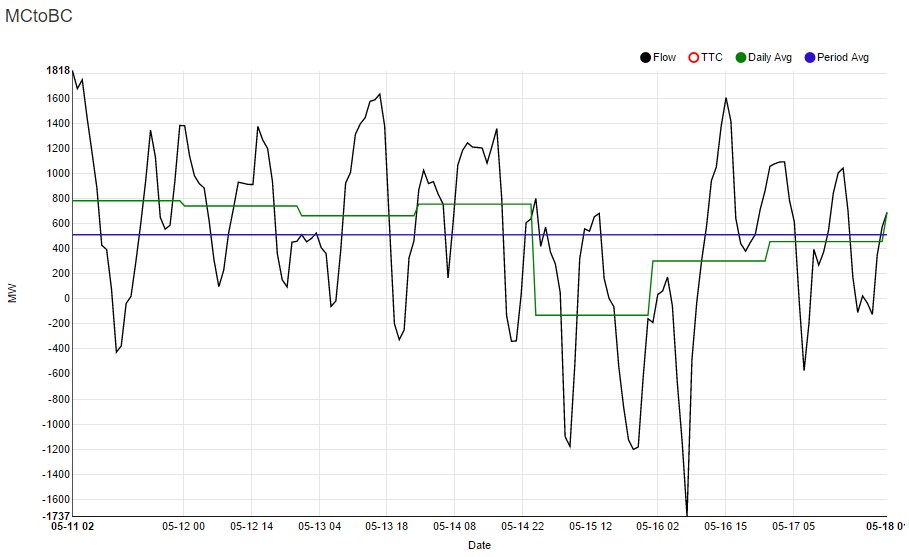 Transmission on the MC-BC line calmed down a bit yesterday after its crazy ride on the 16th where we saw a low of -1,737 MW jump up to a high of 1,606 MW over the span of just eight hours (from morning to mid-afternoon).  Despite MC importing heavily in the morning hours, the quick jump back to exports pushed the daily average positive, finishing at 302 MW for the day.  Yesterday came in closer to the 7-day average with a daily average at 457 MW (compared to 511 for the week). 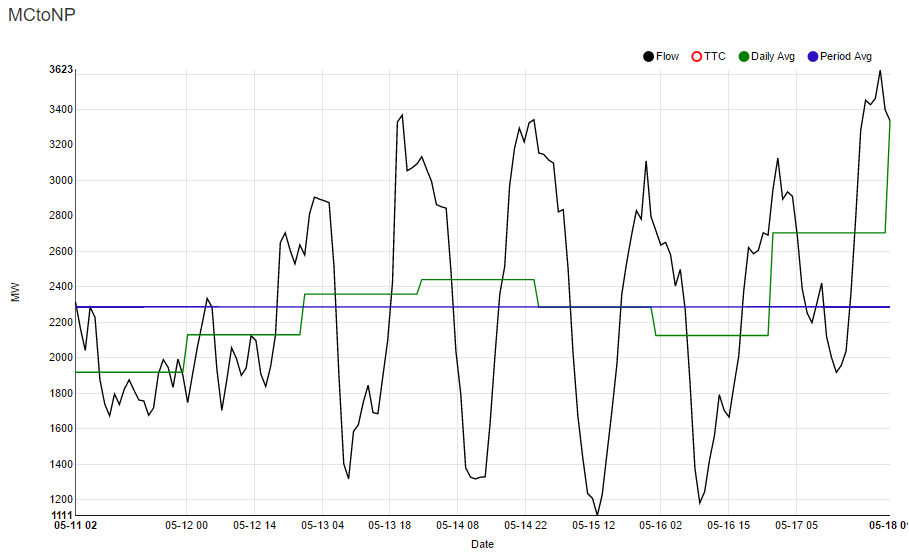 MC-NP set a new weekly high at 3,623 MW very early this morning after starting the climb mid-afternoon yesterday.  This jump increased the daily average well above any of the previous seven days after settling at 2,705 MW.  After seeing flow drop below 1,400 every day since the 13th, yesterday stayed well north with a low of just 1,918 MW.