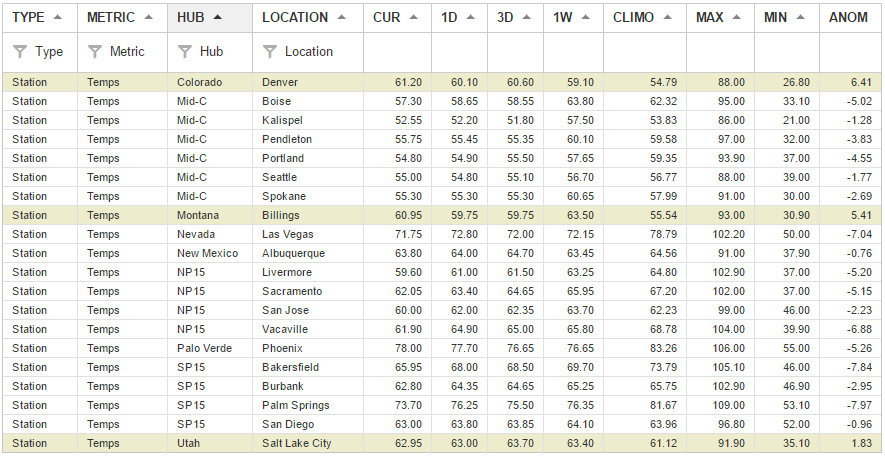 In a stark change from last week, only three stations are forecasting above normal temperatures over the next ten days.  Interior Southern California is set to have the largest deviation from normal with average temps falling more than seven degrees in Bakersfield and Palm Springs.  Denver and Billings stand as two of three stations forecasting above normal as each are predicted to have average temps five degrees warmer.

If you’re curious what is driving average temperatures down in Palm Springs, this chart should help.  With today’s high 17 degrees below normal followed by a rapid ascension back to the mean, the 10-day average should rise closer to 0 quickly.  Though a second cool down (albeit not as extreme) will still factor in as the daily high could fall as much as 11 degrees below normal by the 16th.

Moving toward a heavier population center and we see less extremes, but persistent cool daily highs as the current forecast doesn’t call for anything above normal until the 19th.  In what will be a consistent theme by the end of the blog, the 16th should come in as the coolest day in May, this time 9 degrees below normal.

It’s hot today at 90 degrees, but in a move opposite of Palm Springs, the daily high will fall below normal and likely stay there for the next two weeks.  The 16th is forecasted with the largest deviation from normal at 69 degrees, 11 degrees below average.  The largest difference from yesterday’s forecast came on the 17th as the new forecast calls for max temps to be 8 degrees cooler than yesterday.

San Jose will be a couple degrees cooler than Sacramento but that still amounts to less of a swing from normal as the largest difference in the next two weeks is just nine degrees.  With daily highs in the mid-60s and lows dropping well into the 40’s, degree days should quickly swing in the opposite direction from what we’ve seen over the past week. 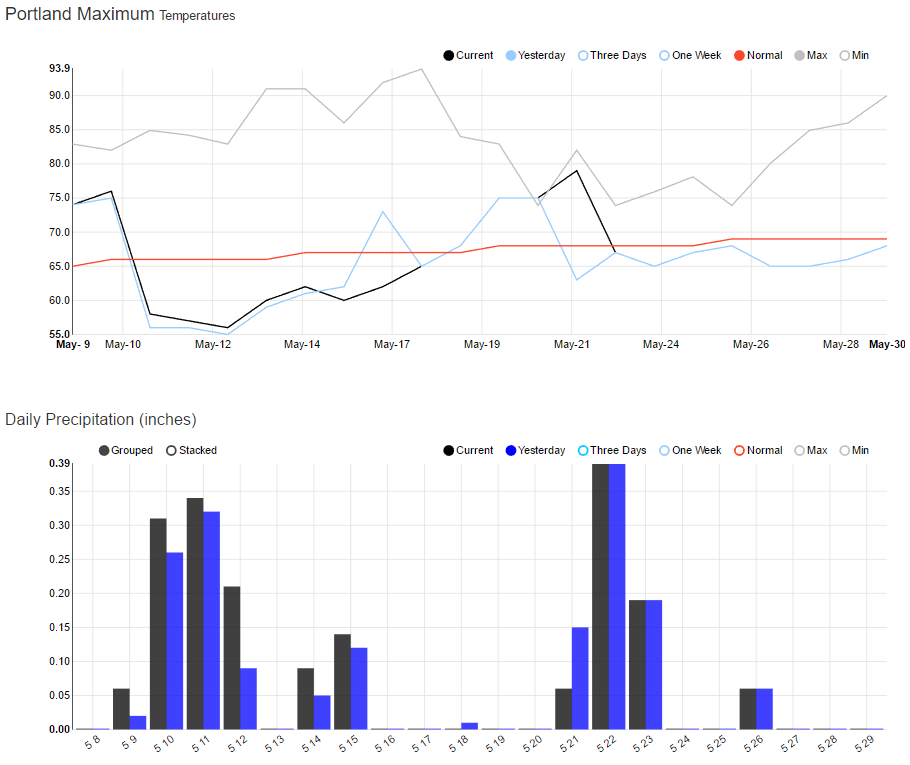 The Northwest will be following a similar pattern as the rest of the west, though it’s going to be much more damp.  Portland will drop from highs in the mid-70s today and tomorrow to the mid-50’s by Thursday.  Just under an inch of rain could fall over the 11th-13th with precipitation peaking on the 12th at 0.34″.

Huge swings for Denver for the rest of the week as max temps hit a low of 58 tomorrow before rocketing to 81 just three days later.  Temps should stay above normal through the 17th before another cool front moves in and temps fall as much as 8 degrees below normal once again.

We’ll take a look at the impact of last week’s Mid-C heatwave in terms of runoff starting with the Spokane River.  After a steady decline over the past several weeks, Spokane hit a trough at mid-day of the 5th at 18,700 CFS before reversing course leading up to 20,775 CFS today, and still increasing.  A mix of high-elevation runoff and heavy rains created the latest increase to the river.

More noteworthy a bit further west as heavy runoff from the cascades have shot sideflows from 16,000 CFS to nearly 44,000 CFS over the span of just three days.  Slope has since changed directions and flows have come off to the tune of 8,000 CFS since peaking on the 5th, though with another warm up over the next couple days (albeit not nearly as extreme) we could see another increase or at least a slow down in the decline.

The Salmon peaked a couple days after the Mid-Col Sideflows, but the increase was equally extreme.  Flows were moving steady at roughly 20,600 CFS leading up to last week’s heat then managed to peak at 68,375 CFS by early morning yesterday.  Flows came off around 4,000 CFS over the past 24 hours.

The next logical question is how was the snow supply affected by last week’s heat.  I’m focusing on the hydro basins pertinent to the charts above, though everything is available in the table if you reset the filters.  While most basins are still well within the range of normal, they are also down from where they were a week ago, particularly the Upper Columbia which dropped from 124% to 100% week-on-week.  The Salmon, despite heavy CFS increases, dropped from 136% to just 132%.  Still a lot of potential there.

The 10 Day River Forecast is showing smooth increases through the next 10 days with a high on the 17th at 28,557 MW.  STP is higher for each day though that gap is reduced at the back end of the forecast as the difference is just 150 MW (compared to 380 MW on the 11th).

Total ISO gas outages increased again over the weekend moving from 10,399 MW on the 5th to 12,124 yesterday, a new 6-month high replacing the previous from early April.  In non-gas news hydro recovered 90 MW, Geo and Bio both saw 80 MW come back online, while wind had a small increase to its outages. 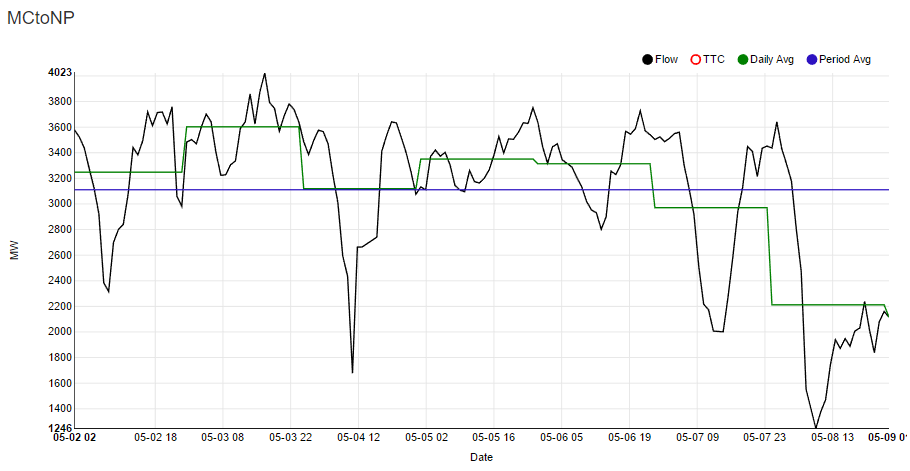 Sharp decrease in daily flows yesterday having dropped well below the seven day average of 3,111 MW to 2,212 MW daily average yesterday.  That marks the third consecutive day of decreasing flows for MC-NP.  Flow peaked at 3,641 MW yesterday at 2:00 AM before plummeting to 1,246 MW by 10:00 AM. 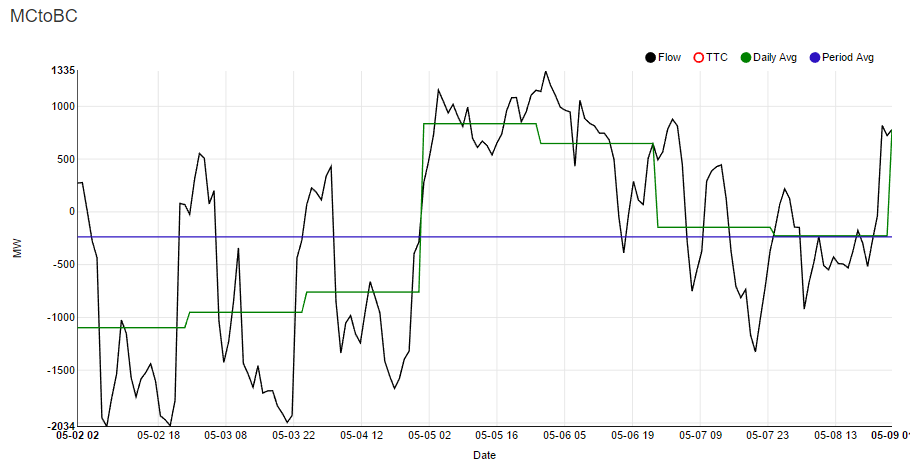 Imports and exports continue to change hands over the past week, and yesterday was no exception as flow crossed the neutral point multiple times.  The daily average finished nearly identical to the seven-day average (-227 MW compared to -237 MW respectively).