With today marking the hottest Mid-C day of 2017, it’s worth noting where we currently sit in terms of snow before the inevitable heavy runoff.  Thanks to persistent mild temperatures, Mid-C snowpack raised its anomaly percentage from 99% to 111%, despite the lack of actual snow.   The current snow year now sits behind 2011, 2014, and 2016 as of May 5th.

The Salmon River basin leads the way for Mid-C at 1.37% of normal, while Washington West, Clearwater, Spokane, and Pend Oreille all sit at 103%, the lowest among hydro basins.  Grand Coulee was the only basin to record a week-over-week decline having dropped to 116% from 123%.

For those of you curious how today’s heat will directly affect Northwest rivers, the CFS Recap Daily is a good place to look.  The Spokane River is currently flowing at 18,480 CFS and with added high elevation melt, is expected to have one last peak at 20,372 CFS by May 10th.

Mid-Columbia Sideflows have already taken off despite temps in the low 70s yesterday.  With highs in the mid-80s today though most of Eastern Washington, we could see CFS explode.

The gap between the RFC and STP forecasts decreased slightly from Tuesday in the back end of the forecast, but increased over the next two days.  The RFC is now forecasting small increases through each of the 10 days as well (moving from 26,029 MW today to 26,989 MW by the 13th).

Grand Coulee has raised its reservoir about half a foot since the end of the draft, though that level has held steady for three consecutive days now.

Mid-C loads are down 1,130 MW week-over-week largely thanks to temps creeping up since the beginning of the week.  Demand is actually up year-over-year (by 681 MW), as last year had a higher average daily temp.  Demand dropped nearly 900 MW since Monday as degree days slowly climbed closer to 0.

NP wasn’t left out of the action either with demand peaking at 16,522 MW yesterday, 4,060 MW above last week and 3,140 above the same day last year.  The difference in daily and 7-day average was even more pronounced in NP where 2,306 MW separated the two measurements as of yesterday. 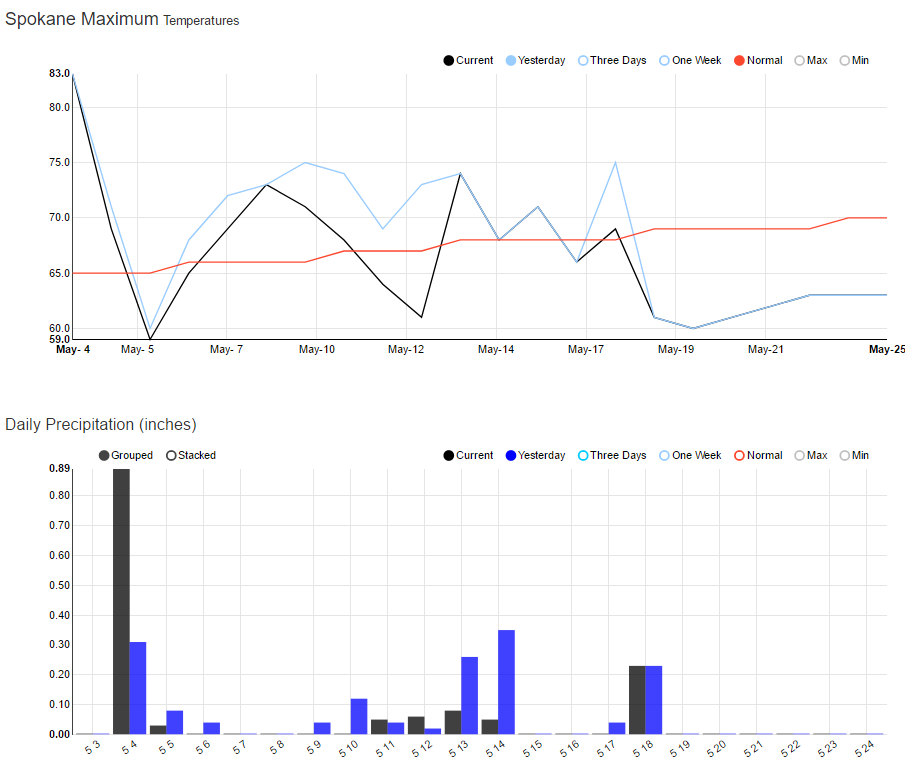 The northwest heating up today isn’t new news to anyone at this point so we will focus on day-over-day changes instead.  Spokane Is still set to reach the lower 80s today, but in a change in forecast, next week is trending much cooler with a difference as high as 12 degrees late next week.  Also worth noting the heavy precipitation looming over the region tomorrow were current forecasts call for nearly 0.9″ of rain.  Mix that together with the expected high elevation runoff today for some added fun.

Boise is projecting a much cooler Saturday, now 7 degrees below yesterday’s forecast.  With a high of 86 today, this drop amounts to a 22 degree difference in daily highs.  Highs will reach back above normal relatively quickly the new forecast suggests it will happen a day later than thought yesterday. 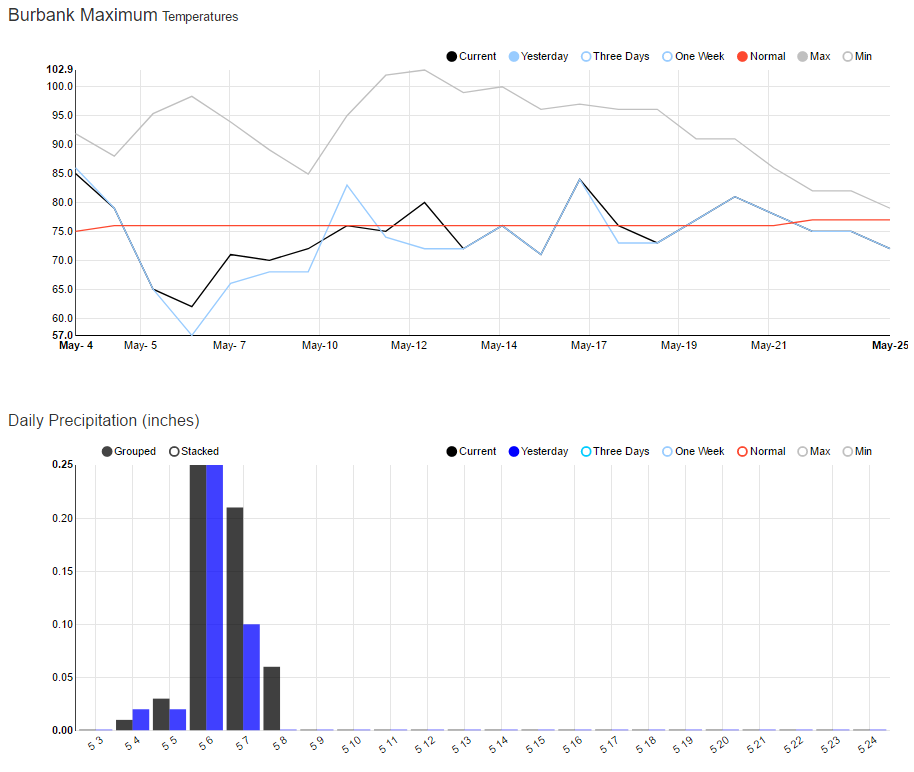 Next week is pacing a few degrees warmer, especially on the 7th where max temps were expected to drop into the 50s, but are now forecasting at 62. Still a massive change from today where the high is still comfortably in the mid-80s.  Next week’s cool weather is bringing a decent amount of precip as well with both the 7th and 8th marking more than 0.20″.

San Jose is also expected to cool off next week, but max daily temps should recover much faster than those in Southern California.  The 8th is now forecasting 6 degrees warmer than what was expected yesterday, and the rest of the week should hover around neutral degree days.

Gas Demand in Mid-C hit its lowest point today since last July at 932 MMCF, down over 170 MMCF since last Saturday. 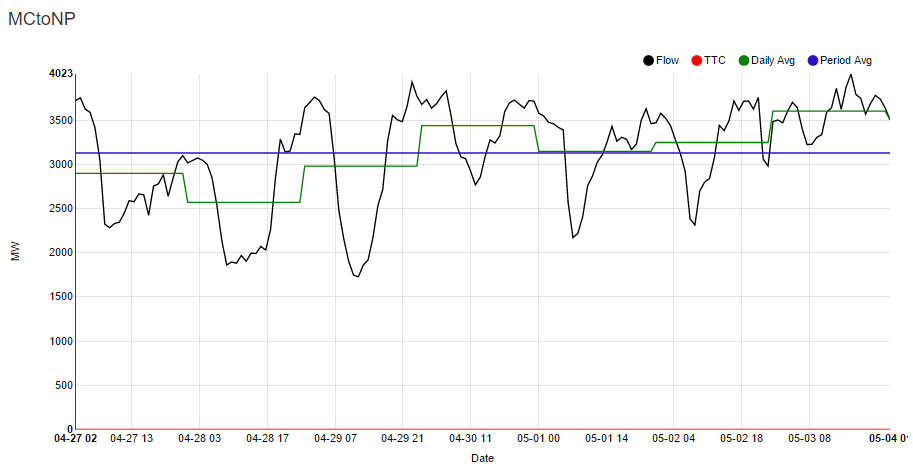 High NP loads are showing up in MC-NP transmissions as the daily average climbed to 3,603 MW up 500 since the 1st.  We’ve also seen the daily drop in flow all but disappear as the difference between the peak and trough amounted to around 600 MW compared to 1500 on most days. 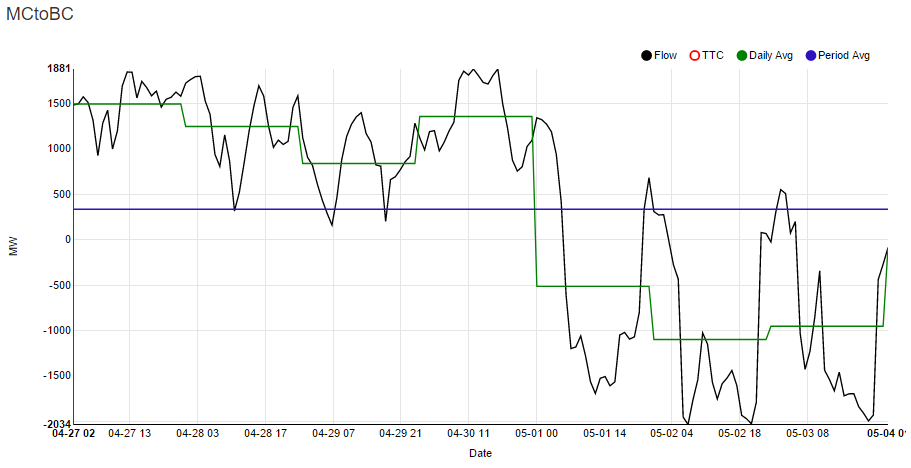 Flow is still moving south – now with a daily average of -952 as of yesterday, compare that to 1496 MW from just a week ago.  Flow hasn’t moved north since 3 AM on the 3rd.