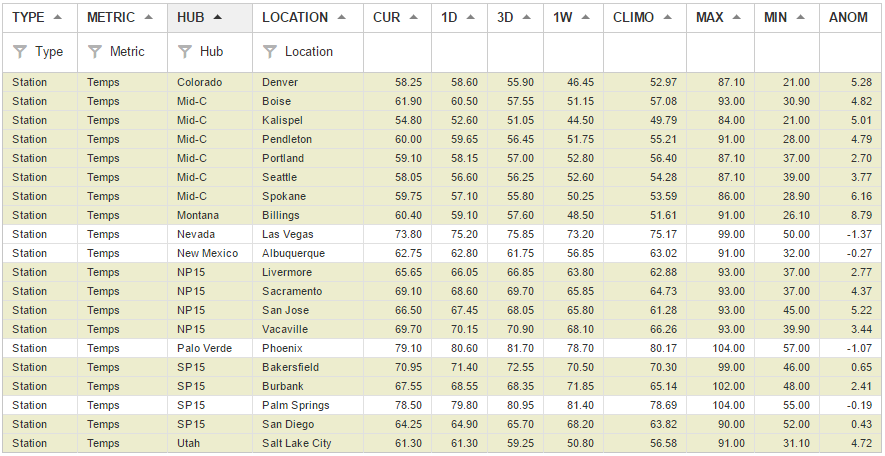 The first real batch of warm weather is just a couple days away from landing in Mid-C, though plenty will be spilling into NP, Colorado, Montana, and Utah as well.  Spokane has the largest anomaly in Mid-C at 6.16 degrees above normal over the next ten days, while Billings at 8.79 has the highest overall.  With warm weather extending well into the Rockies, we should see significant high-elevation melt. 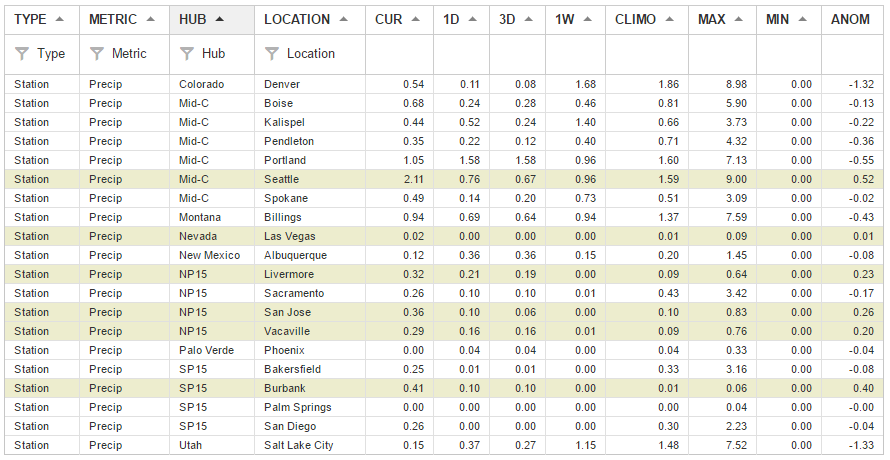 Probably not much of a surprise, but there will not significant precipitation accompanying the warm front in the Northwest (with Seattle the only amount worth noting).  NP on the other hand will be mostly wetter as three of the four stations anticipate more than 0.20″ of precipitation.  Denver and Salt Lake are bone dry as each fall more than an inch below normal.

It snowed yesterday in the high elevations surrounding Kalispel, but that snow will come rushing off the hills starting tomorrow and in earnest on Thursday where the daily high is expected to reach 75 (13 degrees above normal).  Temps are expected to peak above 60 for at least the next two weeks.

Move 150 miles west and the forecast gets a little more extreme.  Spokane and much of the Inland Northwest is set to reach above 80 for the first time since last September, and will stay in the high 70s for an additional day before briefly dropping back below normal by the 5th followed by highs in the high 60s and low 70s through the first half of May.  The high of 82 is 17 degrees above normal.

Moving south into the Snake Basin and temps are expected to increase another 5-10 degrees on average.  Boise is set to have consecutive 80-degree days on the 4th and 5th, and other than a brief flirt with high 60’s, should stay in the 70’s through May 17th.

While the Northwest is moving into a warm front, San Jose is prepping for the opposite direction.  Temps will stay in the 90’s through tomorrow (setting a new 10-year record on the 3rd as well), before quickly dropping back into the 70’s for what currently looks like the rest of the month.  Degree days in May could be very relaxed for San Jose.

The other side of the NP equation is warmer as expected.  Sacramento’s forecast has moved up a few degrees for the next week (compared to yesterday’s forecast), and is now pushing for a high of 94 tomorrow, 18 degrees above normal.  If the AC wasn’t turned on yesterday, it definitely will be for the next few days, though that too will be short-lived as temps sittle back into the high 70’s thereafter.

Curious how the this year’s weather has stacked up against the past few years?  Weather Actuals holds your answers as you can compare any date in 2017 to the historical 10-year average, the Min, the Max, or the average from each of the past three years.  Burbank for example will be entering three-year highs beginning on the 3rd after closely following the 10-year average for the past couple weeks. 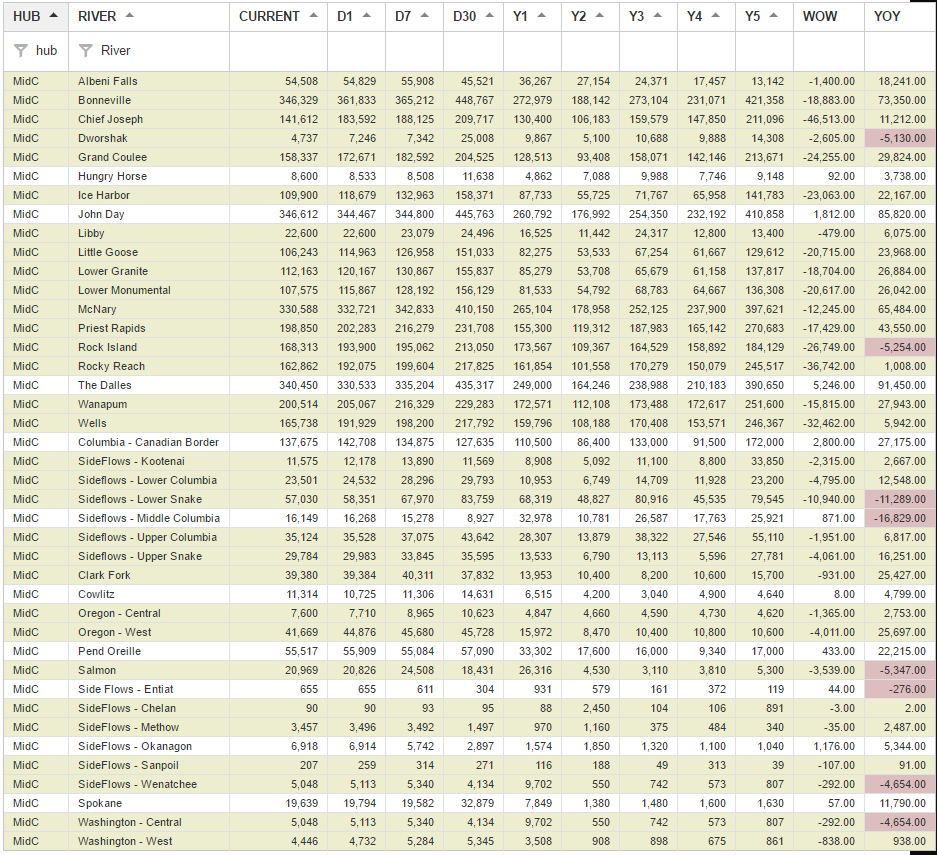 Columbia dams continue to report week-over-week drops in flow as the end of the draft cascades down the river.  The Pend Oreille increased week-over-week by 433 CFS, and the Spokane River is holding steady at just under 20k CFS.

In a change from most weeks, the 10 Day River Forecast Center is projecting considerably lower than STP especially moving into the period after the coming heat wave.  STP is projecting nearly 1400 MW more than the RFC on May 6th, for example.  Today’s RFC forecast is actually slightly lower than yesterday’s as well.

With Spokane, Kalispel, and most of Western Montana prepared to touch 80 degrees, we should expect the actual snow depths to come dangerously close to falling below the average curve in the following days.  The average began its decrease in mid-April while the 2017 line has been mostly flat since April 20th. 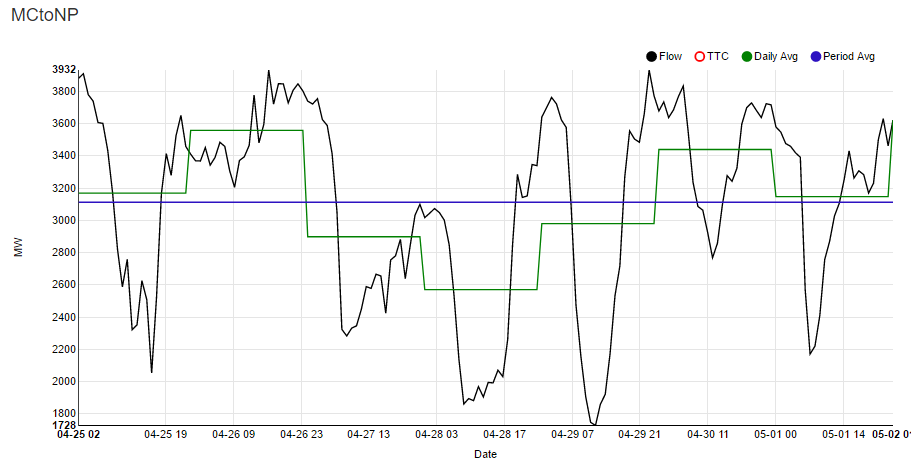 Line flows dropped to as low as 1728 MW on Saturday before quickly recovering to 3928 MW just 12 hours later, the weekly high.  Yesterday generated a daily average flow of 3147 MW, directly in line with the weekly average of 3112 MW 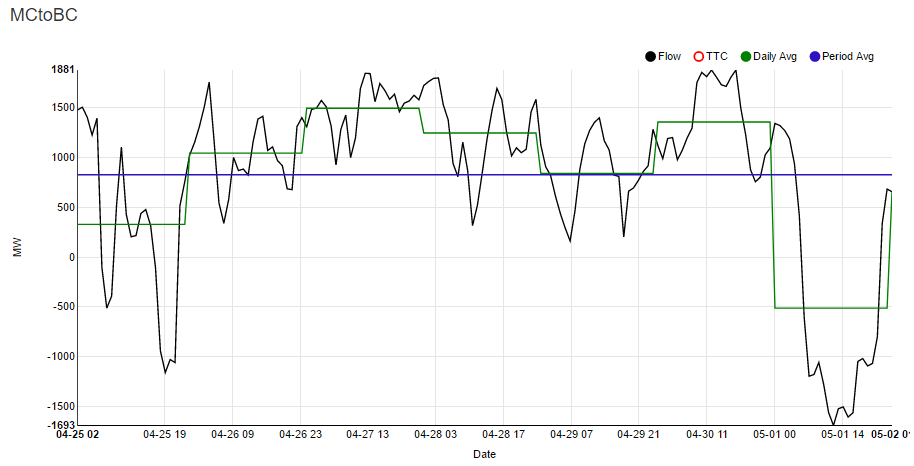 Very heavy imports from BC yesterday as flow dropped to -1693 MW at 1 PM, easily the lowest point of the week.  This drop was sustained long enough to push the daily average down to -513 MW compared to the weekly average of 828 MW (a net export).