In a big change from yesterday’s forecast, Burbank is now projecting temps dropping to the low 70’s for late next week.  This change amounts to a difference of 11 degrees on the 5th, and 10 degrees on the 4th.  Burbank is still on course for mid-80’s through the 3rd of May.

April 19th marked the change in Southern California weather as the highs had primarily fallen under normal temps for the first half of the month, and have since sat comfortably above normal. 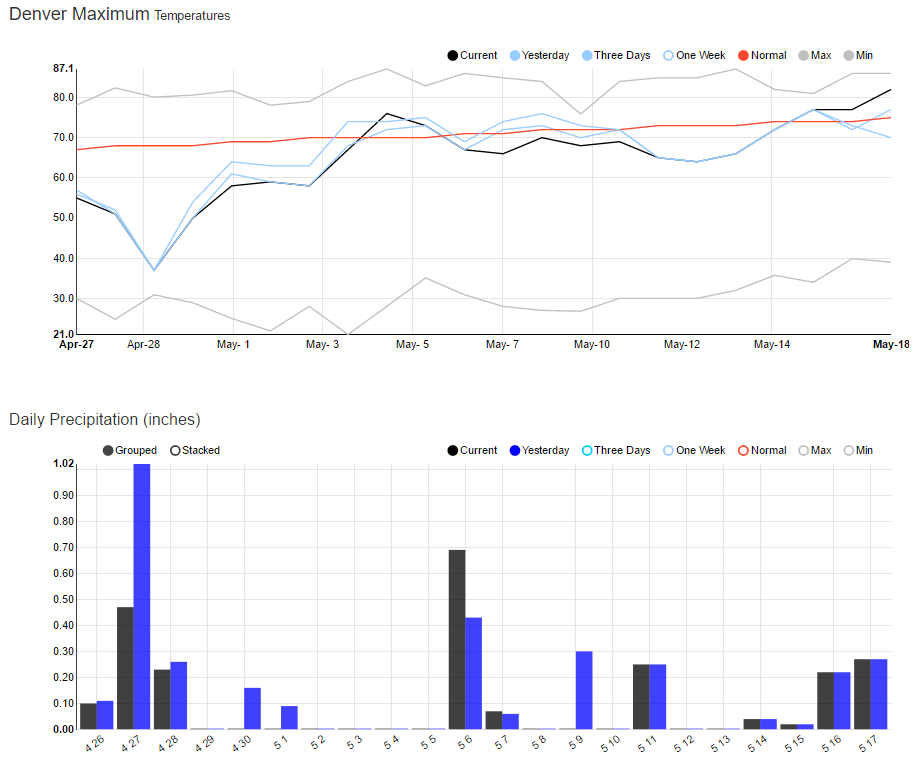 We are still expecting Denver to drop to a high of just 37 on Saturday, though the proceeding days are now forecasting a few degrees cooler as the high won’t reach above normal until the 5th of May.  The inch+ of precipitation expected to fall today was reduced by more than 50% as 0.47″ are expected.

Big adjustment to Sacramento’s forecast moving into next month as its daily high begins the long climb to an eventual high of 90 by May 4th.  Today’s forecast began to deviate from yesterday’s forecast beginning on the 29th leading to a max difference of 7 degrees by the 2nd, and amounting to a much warmer start to the new month.

Same story in San Jose, and therefore likely the rest of Northern California.  We are now forecasting a change of 5 degrees (higher) on the 2nd, with an overall high of 86, a full 14 degrees above normal.  San Jose should have a daily high above 80 from the 29th through the 3rd.  In another change from yesterday, temps are now expected to dip below normal on the 5th (to 71 degrees compared to 77 in yesterday’s forecast).

Phoenix looks to start off May with some extreme heat, and it’s only getting hotter.  Saturday marks the low point in the forecast, and perhaps the last day in the low 80s for some time.  There is potential for three days of new 10-year highs starting on May 5th and culminating on the 7th with a high of 103, 11 degrees above normal and 2 degrees above the previous high.

Most anomalies fall within 20%, and the ones that don’t tended to be cooler than normal, especially in SP15.  As noted earlier however, that is set to change as Burbank (and San Diego for that matter) are prepping for much higher than normal temps over the next couple weeks.  Alternatively, Phoenix has already had a hot April and the rest of the spring is looking even hotter.

The lack of a hot day in the Northwest has allowed Mid-C to build on its snow anomaly over the past couple weeks despite not adding much in actual SWE.  SP and NP are seeing an even more dramatic effect as each are still north of 200% of normal making their incredible snowpack even more impressive with each passing day.

In terms of actual change in snow water equivalent, Middle Columbia had the largest weekly change with a decrease of 2.29″.  All but two basins lost SWE week-over-week with the exceptions being Lower Columbia and Wash West (0.62″ and 1.36″ gained, respectively).  Most basins actually gained snow yesterday however, the highest falling on Oregon Central with 1.78″.

Today brought small reductions in the 10-Day RFC Forecast through May 3rd where we saw increases thereafter.  The forecast calls for an overall peak today with a slow decline through the 10 days.  STP forecasts considerably higher from the 30th through the 3rd.

Mid-C loads have held steady for virtually all of the week (until this morning) as daily high demand varied by just 150 MW at it’s highest. This morning brought a peak at 21,699,  nearly 600 MW higher than yesterday, and 620 MW higher than a week prior.  Heavy Loads and Light Loads are both higher annually for all of the past week. 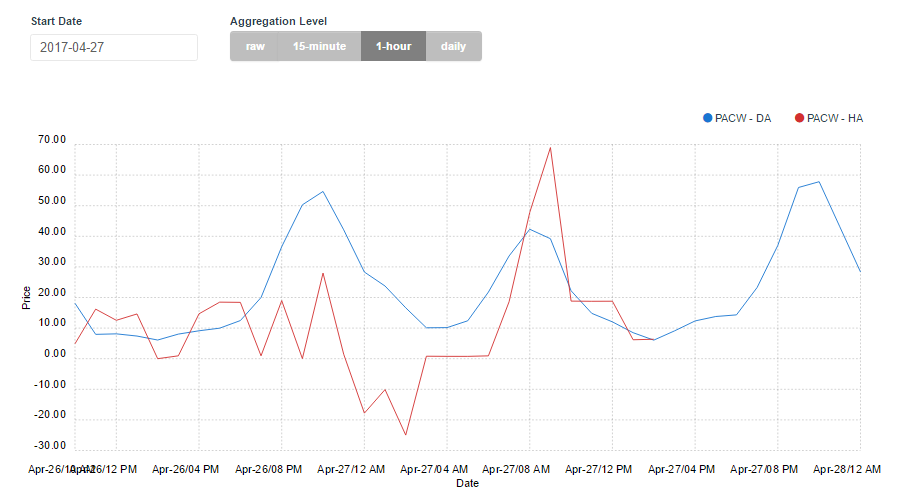 Using the dynamac EIM charting tool we can quickly find interesting charts.  Take PACW for example where very early this morning we saw hour ahead prices fall as low as -$24.97, compare that to $16.63 in day ahead.

Just as soon as we think a significant dent in gas outages can be imposed, we see an increase.  Gas jumped back up 1,083 MW overnight to a total of 5,890 MW.  No other fuel types had movement of any significance.

Speaking of gas, demand for natural gas in NP dropped 325 MMCF overnight, and now sits 320 MMCF below the year-long average.  Demand has been below the annual average for the most part since the end of March.