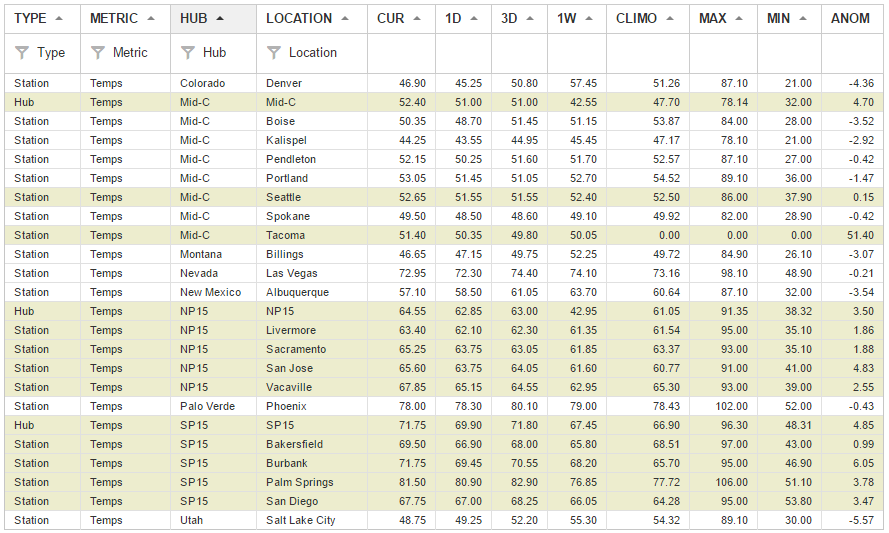 Close to an even split across the west as California is trending warm, and everyone else is staying cool, especially in the Inland Northwest and moving into the Rockies.   Let’s take a deeper look into some interesting stations. 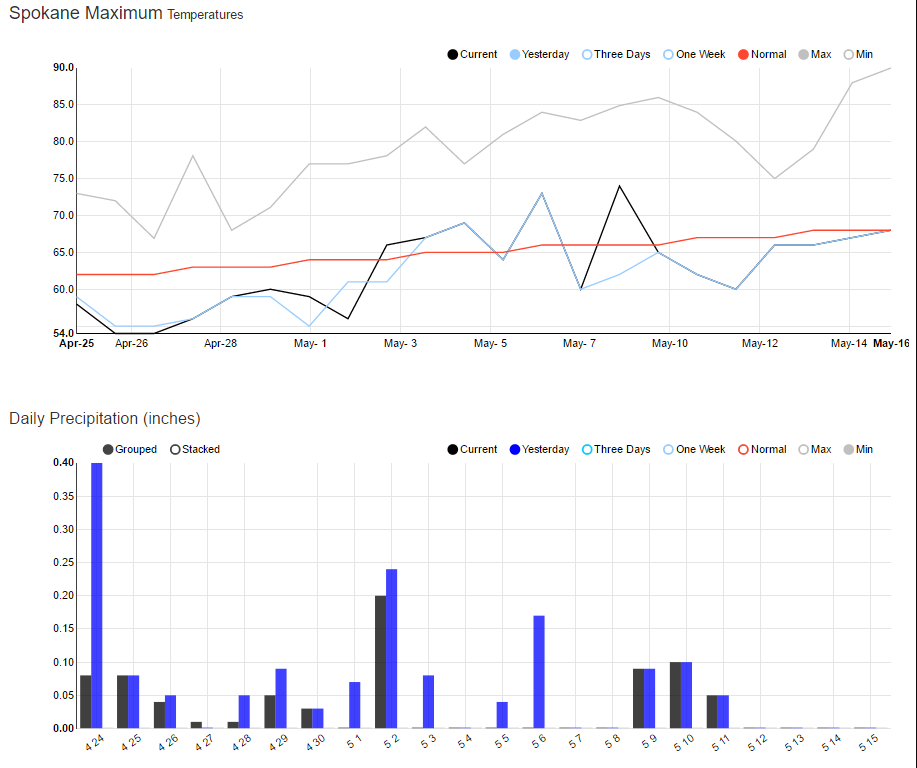 One more week of below-normal temps for Spokane and they can finally climb out of their bear den, and maybe make a significant dent in the upper elevation snow pack.  The first week of May is close enough now that we can take the forecast seriously.  Daily highs will start building beginning on the 2nd, and reach 69 degrees by the fifth.  This trend could continue into the following week as well where we may see temps reach as high as 75. 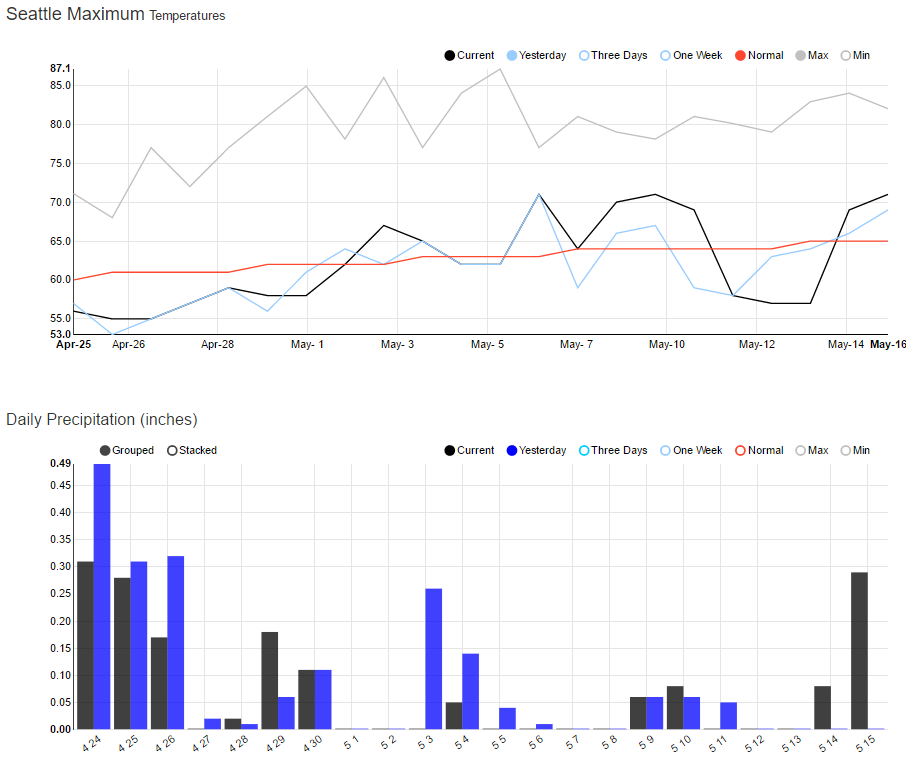 Spokane isn’t the only station with warm weather targeted for next week, it looks like all of the northwest will be included (albeit a little wetter on the western side of the Cascades).  Seattle is set to hit 70 at the same time as Spokane, while Portland could cross 70 as early as next Wednesday (and come very close to 80 by the 9th).

The Southwest is preparing to move from hot to pretty warm through the end of the week before a week-long climb toward triple digits.  the daily high is forecasted to drop to 83 by Saturday (three degrees higher than forecasted yesterday), before reaching 100 by the 3rd. 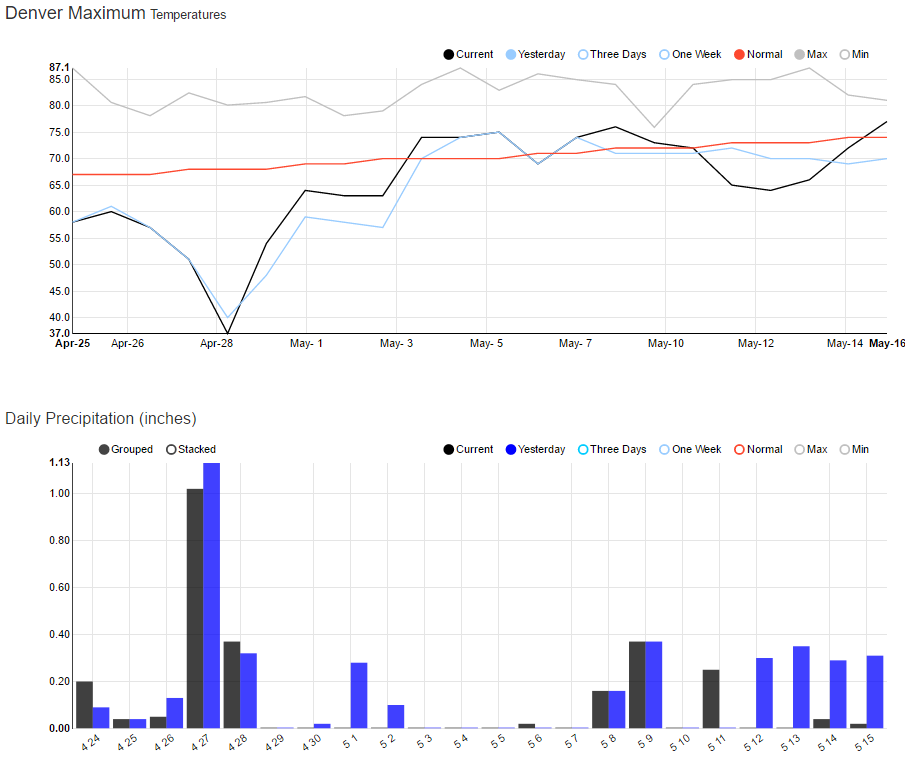 Speaking of extreme swings in temperature, Denver may take the cake for this season.  Max temps are expected to dip down to just 37 degrees by Saturday (along with nearly an inch and a half of precip combined over the previous two days), before shooting up into the 70s by the 4th.  Minimum temps will drop below freezing throughout the cold spell, bringing potential for heavy snow fall as well.

What Burbank lacks in bizarre swings in temperatures, it more than makes up for in consistently warm daily highs.  Southern California will rest comfortably above normal through the end of the month and well into the first week of May as temps are set to peak at 87, 12 degrees above normal, by the 3rd.

It’s getting a later start, but San Jose and much of Northern California are building up to higher than normal temps by next week as well.  The daily high will also peak on the 3rd, at 84 degrees, 12 degrees above normal.  The heat should dissipate soon after as forecasts call for below-normal highs by the following week.

With the draft now officially suspended, the Grand Coulee chart is acting predictable as expected, currently resting at 30% of capacity. 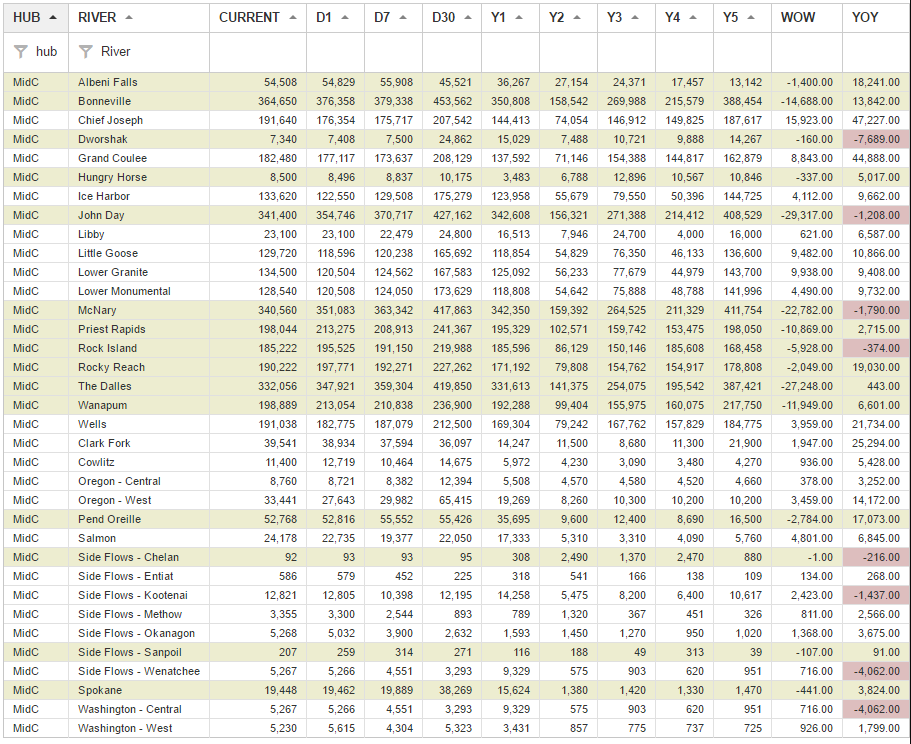 The largest week-over-week changes took place in the lower Columbia as the end of the Grand Coulee draft takes its effect on the rest of the river.  Columbia aside, there were increases in some of the Snake dams as both Little Goose and Lower Granite increased more than 9000 CFS.

The River forecast is up every day compared to yesterday, especially as we approach a peak on the 27th at just a hair below 27000 MW (up 100 MW from yesterday’s forecast).  The largest change from STP is showing up on the 26th, with a difference of around 130 MW.

Demand in PV stayed high over the weekend before dropping more than 10% yesterday.   Week-over-week loads were still up 98 MW, and over 1400 MW year-over-year.

We are finally starting to see some of these gas outages come back online as the total dropped to 5689 MW as of yesterday, marking the lowest gas outages since the first week of the month.  Since the weekend, solar has returned completely, adding back 534 MW.

We knew Diablo Canyon 1 was due for a refuel, and it looks like that just may be taking place right now as the current status is set to offline.  If true, Ansergy predicts the refuel time to take roughly 38 days with the next refuel date set for late 2018. 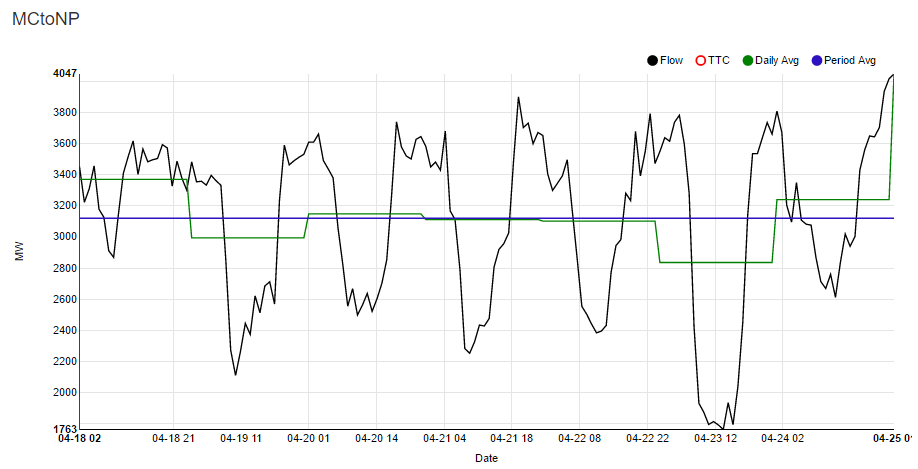 Flow dropped to a new week low of 1763 MW mid-day Sunday before rallying back to a new week high of 4047 MW early this morning.  The current weekly average sits at 3120 MW with most days finishing close to that. 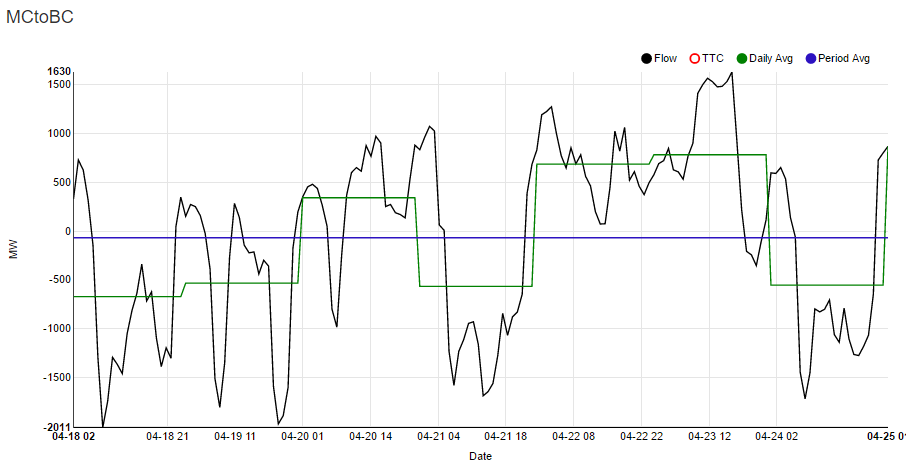 The MC-BC line has alternated directions several times over the past seven days, most recently as last night.  Flow moved south at over 1700 MW yesterday morning before turning the opposite direction this morning to the tune of 868 MW.  Appropriately, the weekly average straddles the neutral mark at just -68 MW.