SP-15 loads dropped just 150 MW since Monday, but that was enough to precipitate a week-over-week decline to the tune of 30 MW.  While the weekly results were negligible, the annual results were not.  Demand in SP-15 is down 2,149 MW year-over-year as of yesterday, primarily thanks to a heat wave on the same day last year.

Mid-C has had increases each day this week having moved from a high of 20,107 MW on Monday to 21,157 yesterday.  Yesterday’s high still came up short compared to seven days prior, but only by 3 MW.  Year over year, is a different story however as yesterday’s peak demand was 1,488 MW higher than last year.

Warm Southwest weather led to steady increases in PV demand as yesterday’s high made a nearly 25% jump over demand from April 9th.  Demand fell yesterday compared to Tuesday however, as loads dropped 143 MW.  Annually, demand was nearly identical as of yesterday as a heat wave aligned in both years. 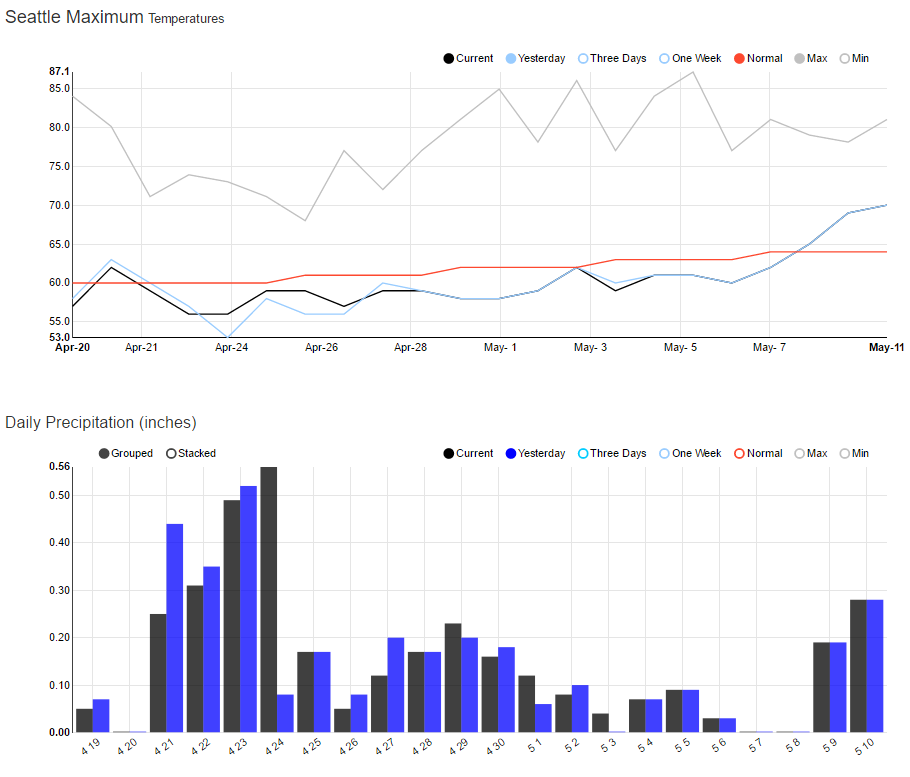 Seattle will take a breath above normal briefly tomorrow before diving back under through the rest of the month, and well into May.  Temps are forecasted to bottom out on the 23rd at four degrees below normal.  It’s a ways out, but the forecast is suggesting a decent warm up by the end of the first week of May with temps reaching into the 70s.

April rain in Seattle isn’t a surprise, but there will be a lot of it over the next few days as a system moving into the northwest could bring more than 0.25″ a day for four consecutive days, with a peak above half an inch on the 24th.

One noteworthy change in Burbank’s forecast — the 25th’s expected dip below normal has been re-forecasted to stay in the upper 70s.  The 22nd dropped one degree, but still on pace to set a new 10-year high on consecutive days as temps should fall just short of 90 degrees.

Phoenix is still on pace to come dangerously close to triple digits on Sunday, though the forecast is suggesting a steady drop soon after as the highs are expected to decline 11 degrees over the following three days.  In another change from yesterday’s forecast, the early part of next week is about three degrees cooler, and five degrees warmer by the weekend.  The next warm-up was essentially pushed out an extra couple days. 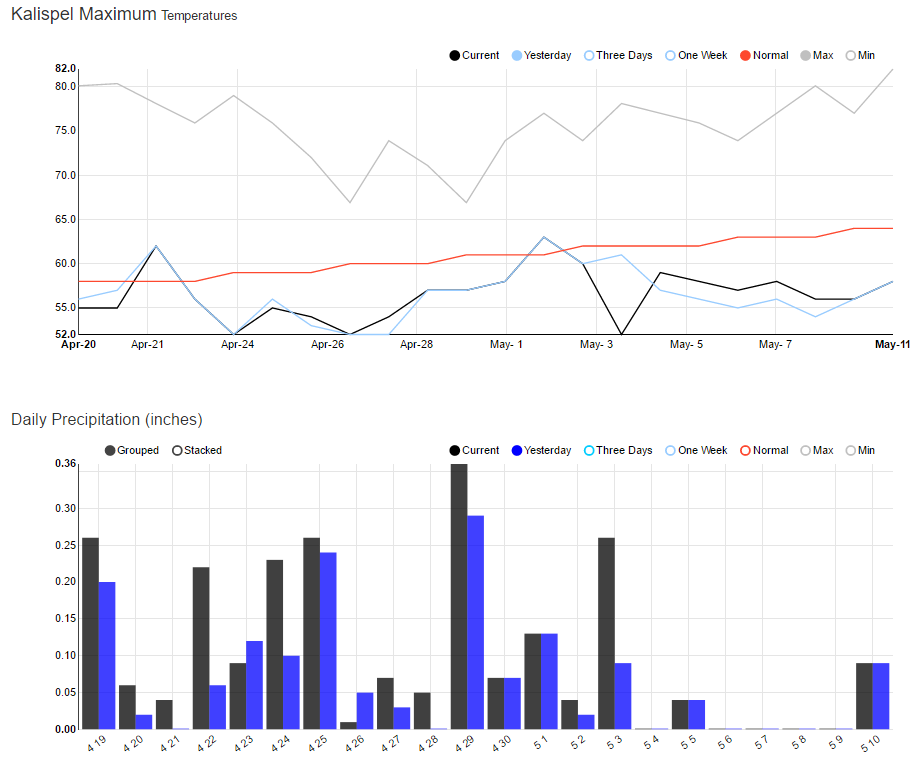 If you’re waiting for the inland northwest to heat up, plan on staying patient as there is nothing in the forecast to suggest it’s on its way.  Kalispell is showing a high of 62 on Saturday, but that’s essentially the pinnacle for the next three weeks as temps will sit primarily below normal (by as much as seven degrees next week).  Add in heavy precipitation and minimum temps hovering around freezing and the runoff might never start in earnest.

Another day with very minimal day-over-day change to the 10 Day River Forecast as most days differed by just a few MW.  The RFC is forecasted below STP for all ten days, though both are predicting a 10-day high on the 26th (27,914 for STP, 27,375 for RFC). 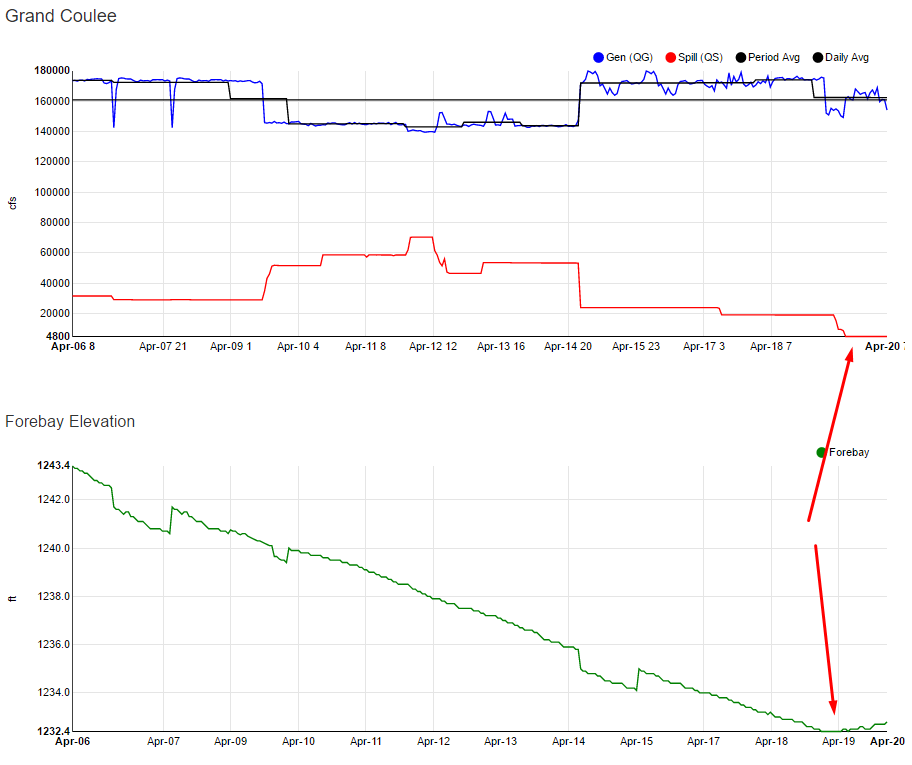 Spills in Grand Coulee look like they may have finally bottomed out, and as a result, forebay elevations are slowing beginning to rise or at least remain relatively flat (elevations rose around half a foot day-over-day).

Meanwhile the Spokane River is holding its downward slope steady, now sitting at just under 20,000 CFS, down from 25,750 CFS on the 11th.

All four hubs are still well above 100% of normal with SP15 still leading the way at 205%.  Mid-C has taken the largest hit this week having dropped from 126% to 109%, but with cool temps persisting, that number has a just to hold steady at the very least. 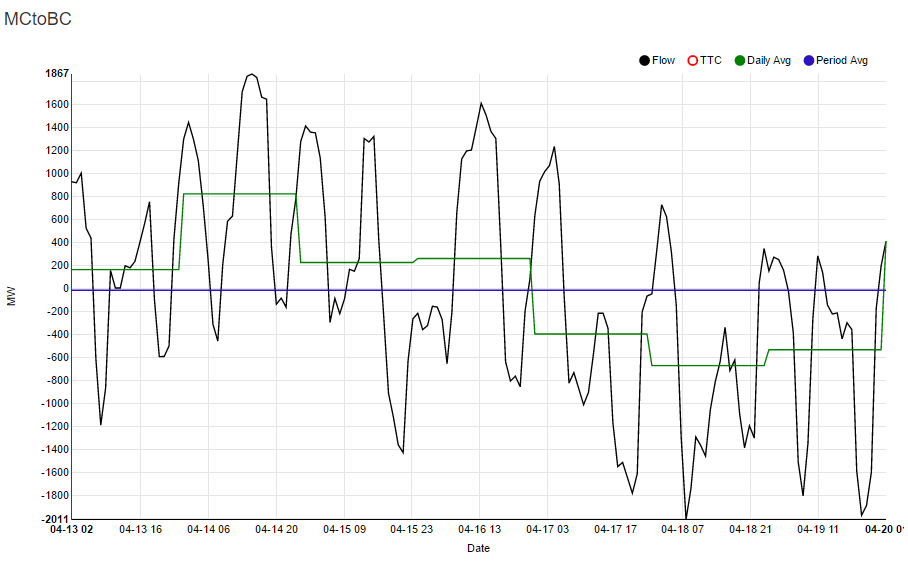 Yesterday marked the third consecutive day of southerly flow, a stark change from the previous week where BC had been steadily importing.  The daily average bottomed out at -671 MW on the 18th, well below the weekly average of -15 MW.  Yesterday’s average climbed up around 140 MW, though the lowest flow dipped down to -1974 MW at 8:00 PM last night. 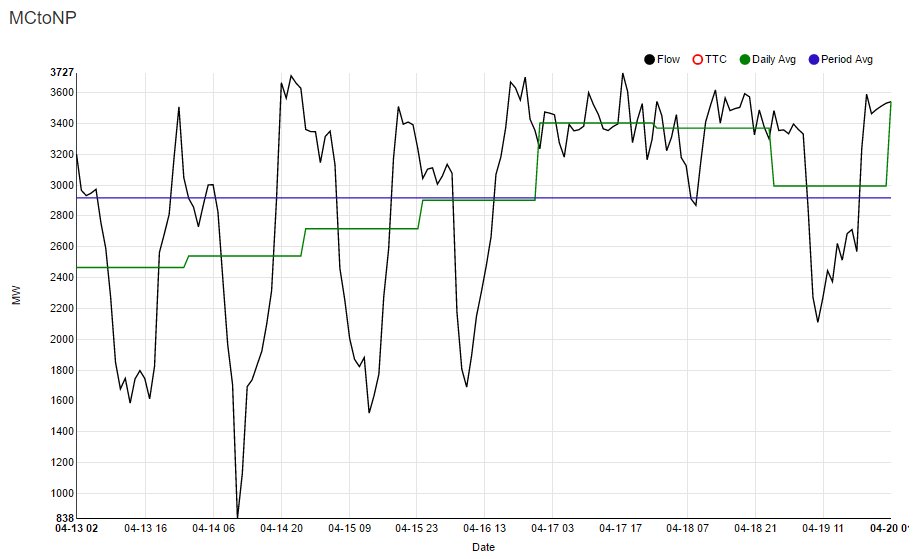 While MC was busy importing from BC, flows increased into NP on the 17th and 18th, though there was a sharp decline yesterday (difference of just over 300 MW from the 18th to the19th).  The weekly average currently sits at 2917 MW, about 450 MW higher than the daily average at the beginning of the week.