It’s still hot in the southwest, and will continue to be so for at least the next week.  Phoenix is set to peak at 93 on both the 16th and 17th which would amount to a degree shy of a 10-year record.  In a sharp change from yesterday’s forecast, Phoenix is now expected to drop into the mid-80s on Wednesday, a difference of ten degrees.

Here’s a quick look at what appears to be a tale of two springs for Phoenix.  After setting 10-year highs for three consecutive days leading into the new season, Phoenix had mostly below normal temps until April 5th where the trend reversed and max temps have finished above normal (and are projected to continue to do so) every day since.

Albuquerque’s max highs aren’t as exciting as Phoenix’s right now, but the deviation from normal might be.  Albuquerque is set to stay above normal until at least the 21st, and can reach a new 10-year high on both the 14th and 18th, each at 12 degrees above normal.  Despite what are still unseasonably warm temps, the forecast was adjusted a bit cooler compared to yesterday’s.

Another 10-year high to note, this time in Las Vegas where max temps are forecasting 87 degrees on the 16th which amounts to 9 degrees above normal.  Much like Phoenix and Albuquerque, temps were forecasted cooler for most of next week compared to yesterday with the largest variance on the 20th at 6 degrees cooler. 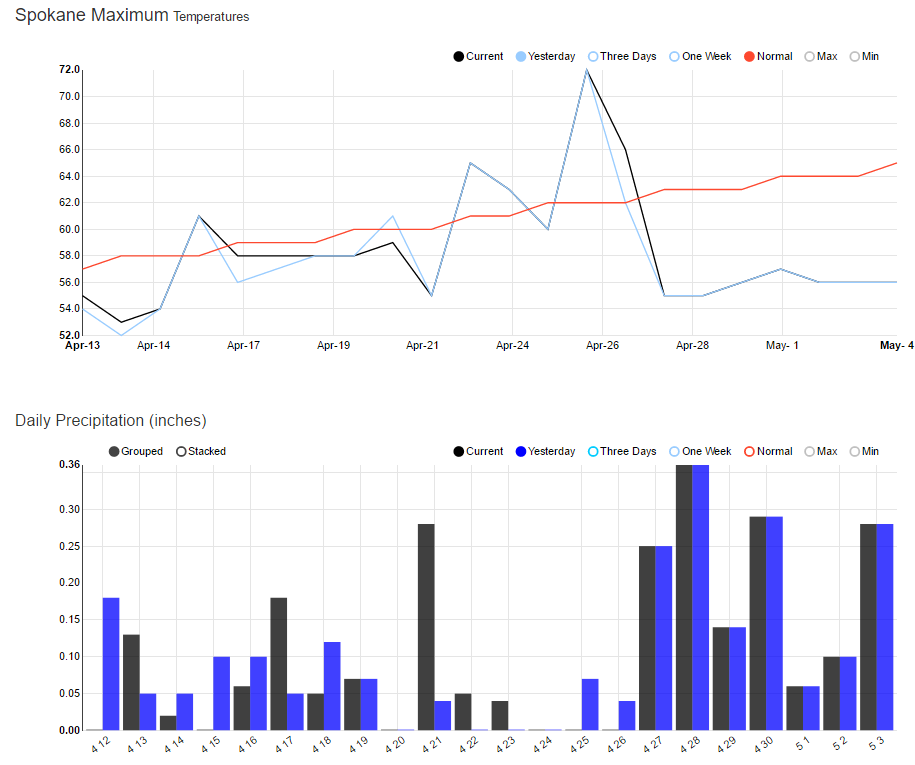 Spokane temps aren’t too noteworthy over the next couple weeks — mostly highlighted with continued cool temps, but there appears to be a significant system building up at the end of the month.  Four of the last eight days in the forecast project more than a quarter inch of precipitation.  It’s still more than two weeks out so a lot can change, but we’ll continue to monitor the system. 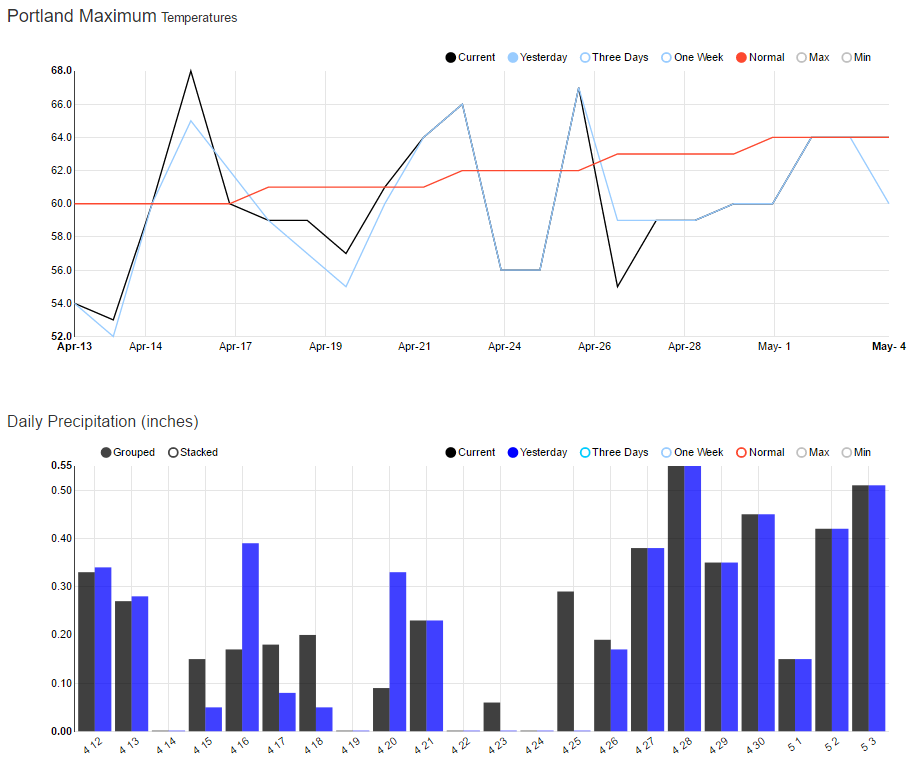 While Spokane was noted first, it’s the entire Northwest forecasting significant precipitation at the end of the month, especially Portland and Seattle.  As it stands today, 18 of the next 21 days are expected to see precipitation in Portland.

Sometimes no news is news as is the case in Southern California where Spring temps are mild and hardly deviate from normal for the next couple weeks.  With max temps sitting comfortably in the 70s and low temps a few degrees above normal, degree days in SP-15 should remain low for a while.

The west is mostly drier than normal over the next ten days, especially in Denver and Salt Lake where each are nearly an inch shy of climo.  Spokane and Boise continue their damp springs and cooler than normal temps as the snowpack teeters on building in the highest elevations.

Very slight day-to-day changes in the 10-Day River Forecast with the largest variance at just 12 MW for the 13th.  Compared to Tuesday however, the forecast is down close to 100 MW through the 16th before switching positions and forecasting higher.

Three dams had significant week-over-week change in elevation.  Grand Coulee dropped another five feet to 1237′, Libby also dropped five feet to 2375′, while Dworshak had the largest decrease with more than 10 feet to finish at 1511′.  The largest increase in elevation came down river on the Snake at Little Goose with an increase of just over two feet (635′).

Mid-C demand fell back closer to last year’s levels yesterday after spending almost the entirety of the previous week well above 2016 (a peak annual difference of 3,289 MW on the 11th).  Loads are still mostly flat week-over-week with an increase of just 113 MW, and an annual difference of 423 MW yesterday.

SP-15 loads are down 824 MW week-over-week thanks in part to cooler temps.  Demand is up 368 as loads have increased each day since Monday. 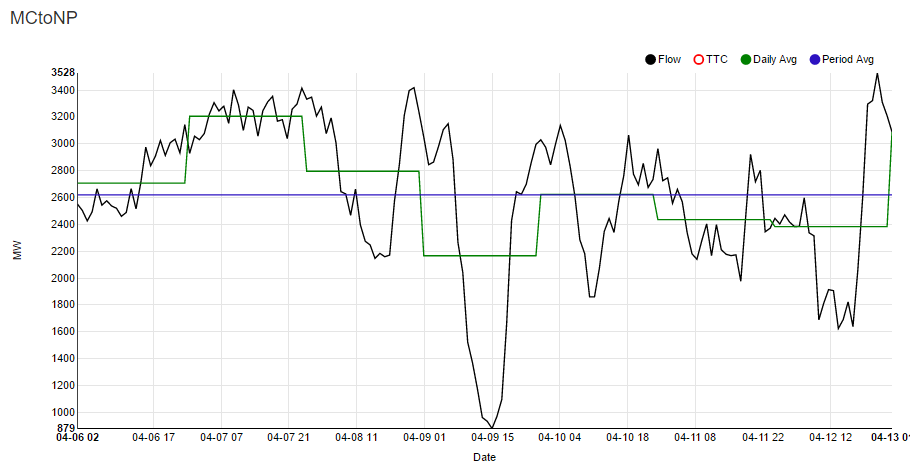 Flow peaked at 3528 MW late last night marking a new weekly high.  This came as a stark contrast to low mark of 829 MW on mid-day of the 9th.  The daily average of the last four days have fallen below the weekly average. 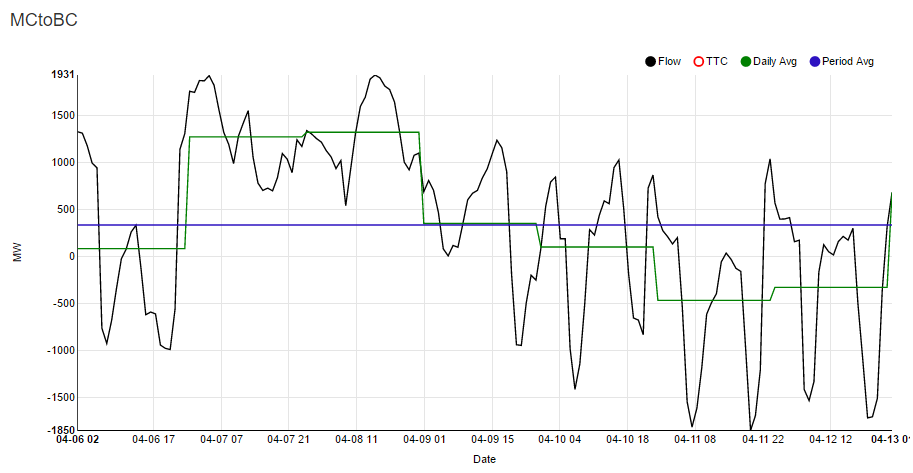 The Mid-C to BC line saw daily averages dip below 0 each of the past two days as flows dropped below -1500 MW several times with a low of -1850 MW late on the 11th.