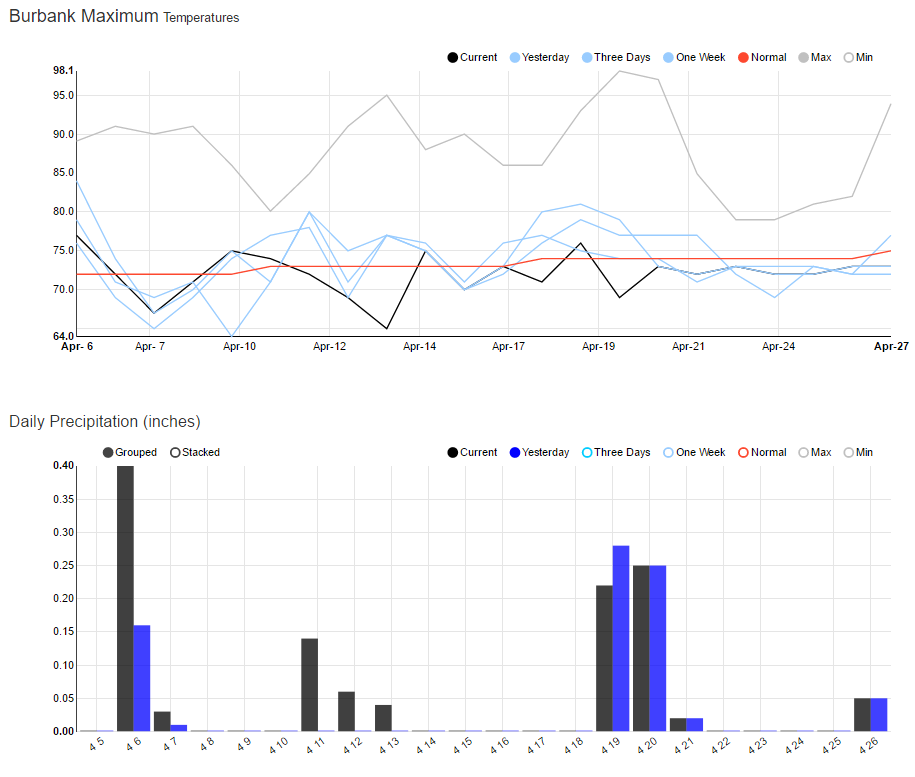 Burbank has fully dropped out of its warm spell and is quickly descending below normal leading up to a high of 67 on Saturday, five degrees below the normal daily high.  Heavy rain will also be part of the cooler system where as much as 0.4″ of precipitation is expected to fall late tomorrow and early Saturday morning.

The heat wave that made a quick appearance in Burbank set a several year record yesterday as the daily high reached 85 degrees. 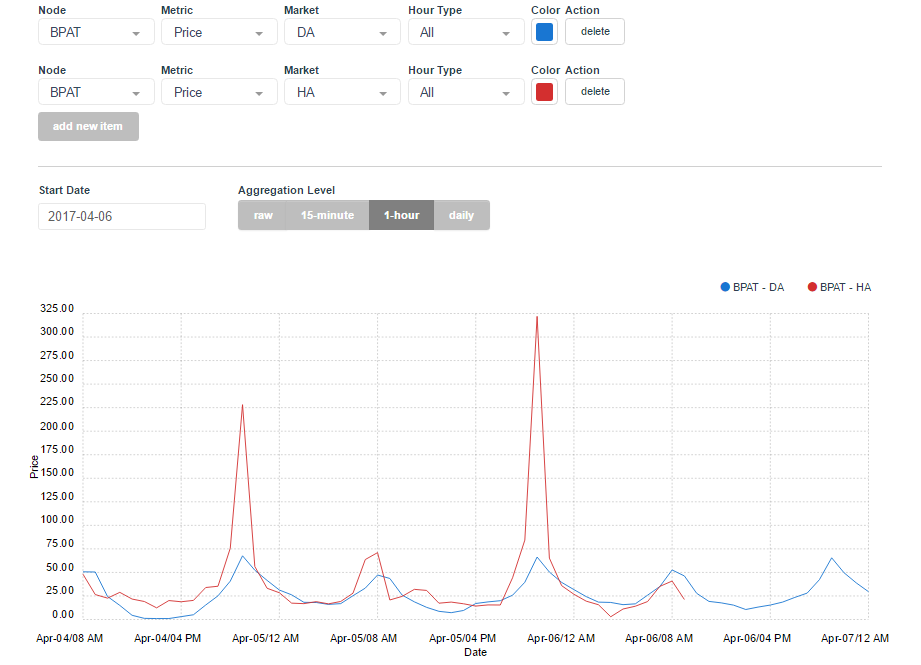 Using Ansergy’s newly designed EIM charting tool (allows for dynamically created charts, and far less limitations) you can see that the HA market reached as high as $321 by 9:00 PM.  Probably too late to say the 85 degrees was the direct cause, but this is a good tool to keep in hand for further investigation. 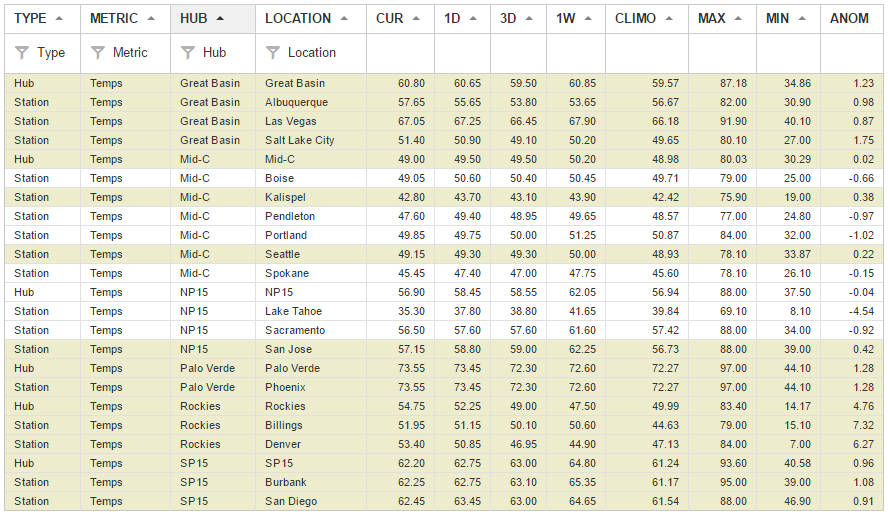 The Rockies are heating up even more than what was noted on Tuesday.  Denver’s average temp forecast increased five degrees over the past two days, and nearly ten degrees since last week. 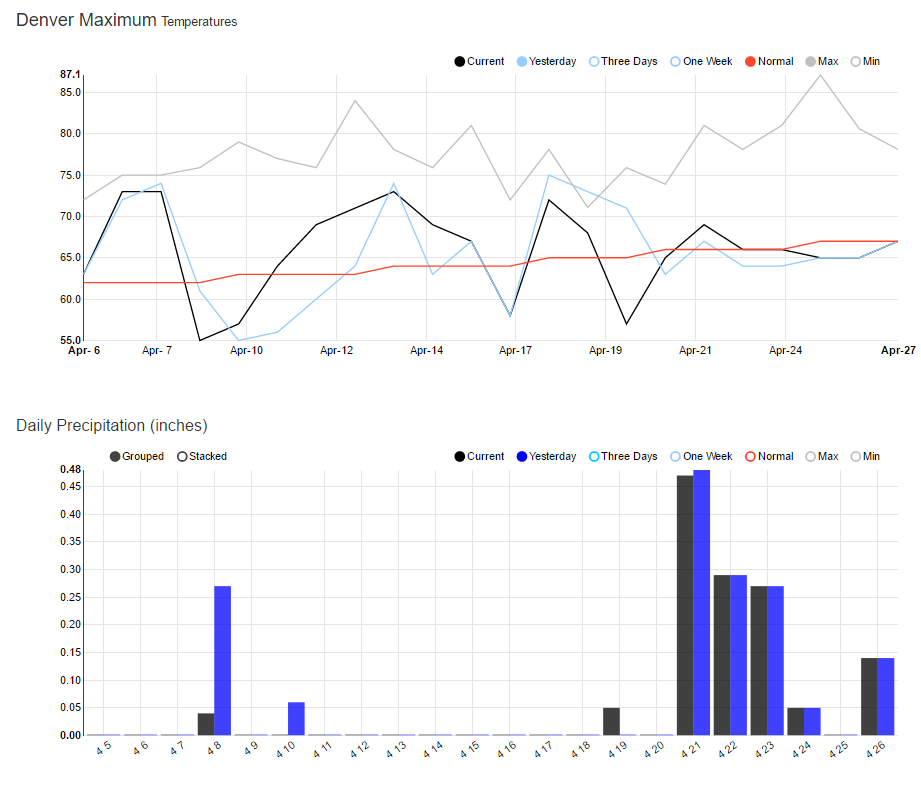 While Denver’s average temperature is forecasting 6+ degrees above normal for the next ten days, the anomaly could be a lot higher if it wasn’t for the brief cooldown beginning on the 9th (where the daily high only reaches 55, seven degrees below normal).  The max high should be 11 degrees above normal for each of the next two days, sitting comfortably in the 70s.  There’s a chance for some trace precip on the 8th, but nothing else in the forecast for the next two weeks. 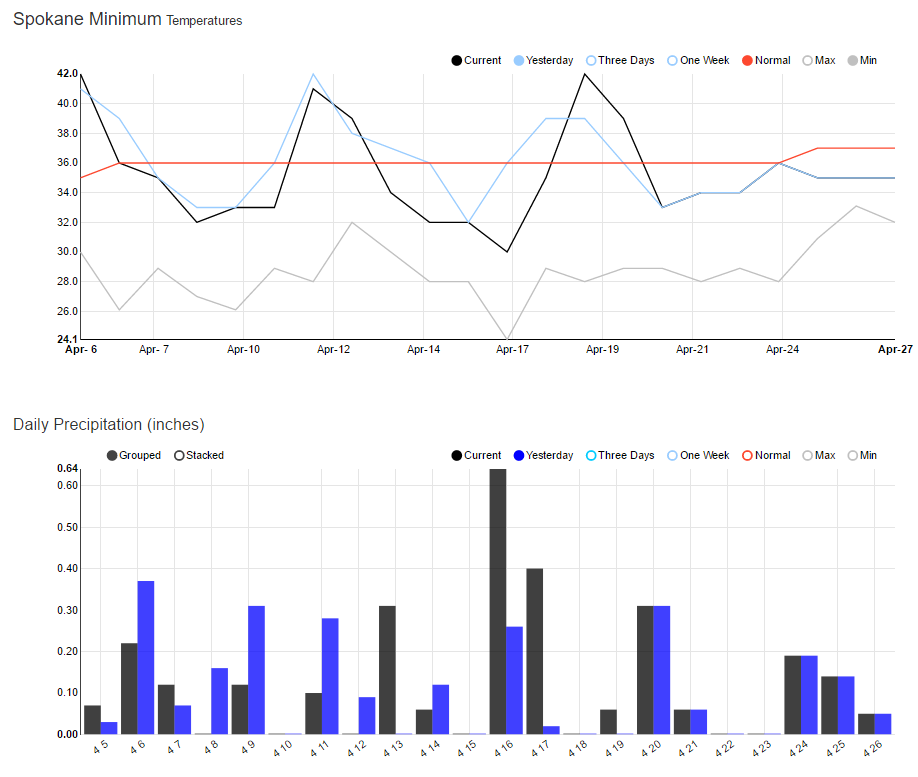 Eastern Washington has enjoyed mild low temps for the past week, but that’s set to change as Spokane is preparing for freezing temperatures once again, though this time it’s going to be paired with precipitation.  While there isn’t likely to be snow sticking in Spokane itself, the mountains in the interior Northwest will surely add a little more depth to their otherwise slowly melting snowpack.

Can be easier to look at this table to see how spring temperatures are affecting demand.  The largest current anomalies reside in the Southwest as Albuquerque sits at +131% and Las Vegas moving the other direction at -64%.

Though Spring weather has definitely made its way into Mid-C, snowpack is still sitting comfortably above normal as an aggregate.  There are a few significant stations reporting large changes over the past week, however.  Spokane has dropped from 133% to 109%, Pend Oreille from 112% to 99%, and Grand Coulee decreased from 112% to 102%.  Take a look at the daily and two-day changes for even more dramatic results as much of the interior Northwest hit 60+ degrees yesterday.

In terms of actual change in snow water equivalent, Oregon Central had the largest weekly change with a decrease of 1.14″.

The River forecast is expecting a peak on the 7th at 27,884 MW, a sharp increase over STP, though a decrease from yesterday’s forecast by around 80 MW.  The forecast expects a slow decline through the following ten days.

Mild weather in Mid-C showed its effect on demand as loads dropped each day following Monday’s high of 25,264 MW.  Yesterday finished 801 MW below the week prior, and just over 200 MW below the same day last year.

While yesterday’s journey into the mid-80s didn’t result in record high demand, it did mark an increase week-over-week as loads are up 922 MW.  Demand spiked last year during the same dates at an even higher rate resulting in a drop of 660 MW year-over-year.

There was a small relief for the gas outages noted on Tuesday as the total dropped from 6583 MW to 6373 MW (though that last number is actually an increase from the day before).  Gas outages remain nearly 1000 MW higher than any other day going back to October.  Hydro fell to 290 MW, and solar to 197.