With hot weather making its first appearance of the year in Southern California, SP15 loads have responded as you would expect.  Demand is up 1430 MW week-over-week, and also increased 711 MW annually.  Light load demand is also up week-over-week by as much as 709 MW.

Mid-C is also warming up, though unlike SP-15, degree days are getting closer to 0 not further away.  Demand plummeted 3,651 MW week-over-week, and is down 2,436 year-over-year. 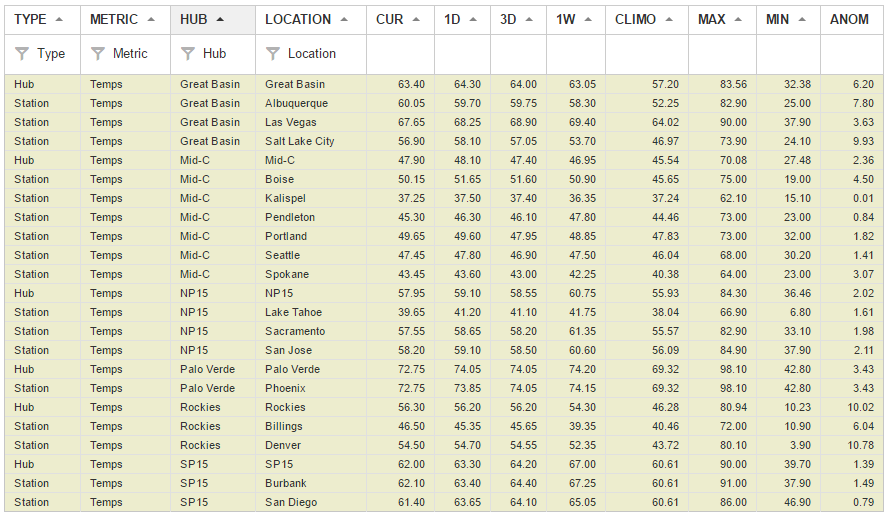 Warm weather has now expanded throughout the West as every station and aggregated hub is forecasting above-normal average temperatures over the next 10 days.  Much like Tuesday, Denver and Salt Lake show the largest anomaly, though many other stations, including those in SP15, have since slightly decreased. 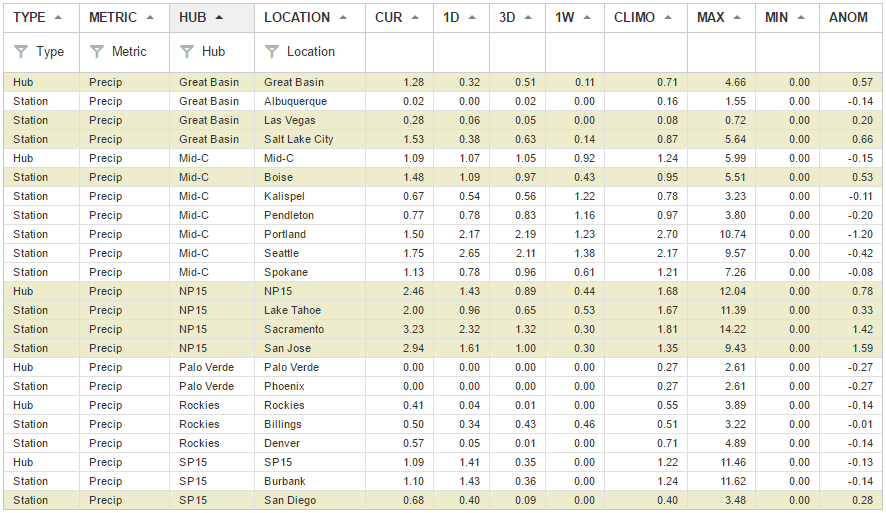 Mixed precipitation forecasts as there is an almost even split between above and below normal levels.  NP-15 and Great basin will be mostly wetter, while the rest of the west will be slightly drier.  Sacramento and San Jose are both forecasting more than an inch above normal spread out over the next ten days.

Denver is expected to stay above normal daily highs until close to the end of the month.  While Denver has been above normal for more than a week, it hadn’t approached 10 year levels until what is expected to be a record on both the 18th and 19th, with the former expected to reach into the 80s.

Burbank will come within a degree of a 10 year high tomorrow when max temps are forecasted to reach 84 degrees, 14 degrees above normal.  Tomorrow also marks the beginning of a cooling trend as daily highs are expected to fall back below normal by the 21st and could stay there for close to a week.

Though Burbank’s maximum temps are set to fall below normal, minimum temperatures forecasting to stay warm for the foreseeable future.

Phoenix is set to reach above 90 degrees for each of the next four days with a peak on Saturday at 94 degrees.  The 18th through the 20th are all on pace to set 10 year highs, and should be 15+ degrees above normal.

The 10 Day River Forecast was adjusted slightly higher compared to yesterday for most of the next five days, and a bit lower for much of next week.  Today’s forecasted is showing a seven-day high of 23,968 on the 24th.

The Clark Fork has really started to pick up the pace over the past week as it currently sits at 25,075 CFS, an increase of 5,725 CFS in just 24 hours and nearly double the flow from a week ago.