The Southwest is heating up and everyone is drying out.  Here are a few highlights of what’s going on in the West. 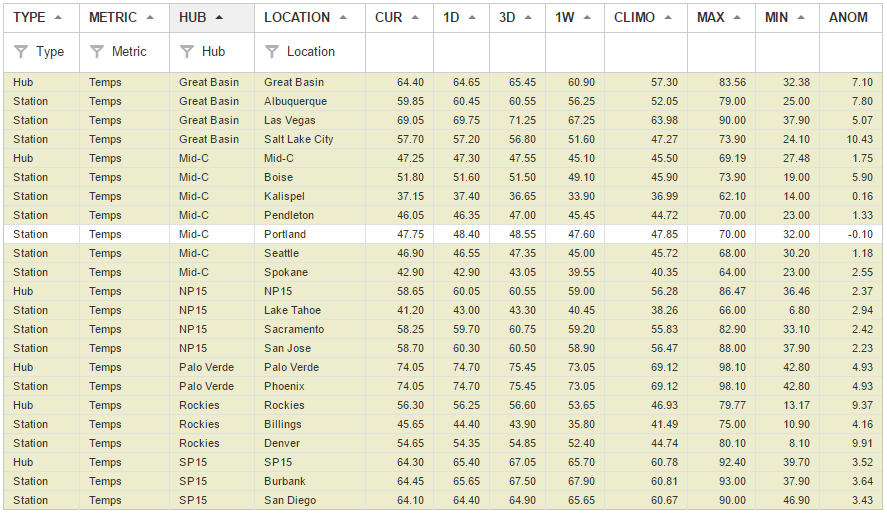 It’s another warm forecast in the west as every station not named Portland (with a not-particularly chilly -0.10 degrees) is forecasting above normal aggregate temperatures over the next ten days.  Rockies and Great Basin stand out with several stations 7 degrees above normal.

Maximum Las Vegas temperatures are set to make multiple ten-year highs over the next two weeks with the first coming tomorrow at 89 degrees (19 degrees above normal).  Temps should reach more than 15 degrees above normal through the 19th before falling back to the mean.

Phoenix should also set new ten year highs over then next two weeks, though the records are set to come a few days later than those seen in Las Vegas.  Phoenix is forecasted to reach its peak on the 18th at 95 degrees, 18 degrees above normal.

While not as extreme as Las Vegas or Phoenix, Burbank and much of Southern California will also heat up this week.  Max temperatures should reach as high as 86 on the 17th, 16 degrees above normal, which would also break the 10 year record by one degree.

Just one station is anticipating a wetter than normal forecast as the rest of the west is expected to dry out a bit over the next ten days.  While Seattle and Portland are forecasting more than two inches of precipitation, it’s still amounts to more than one inch less than normal.

Grand Coulee saw another slow down yesterday as it held steady at 55% for the second consecutive day.  This marks the second time since February that the reservoir didn’t decrease day to day. 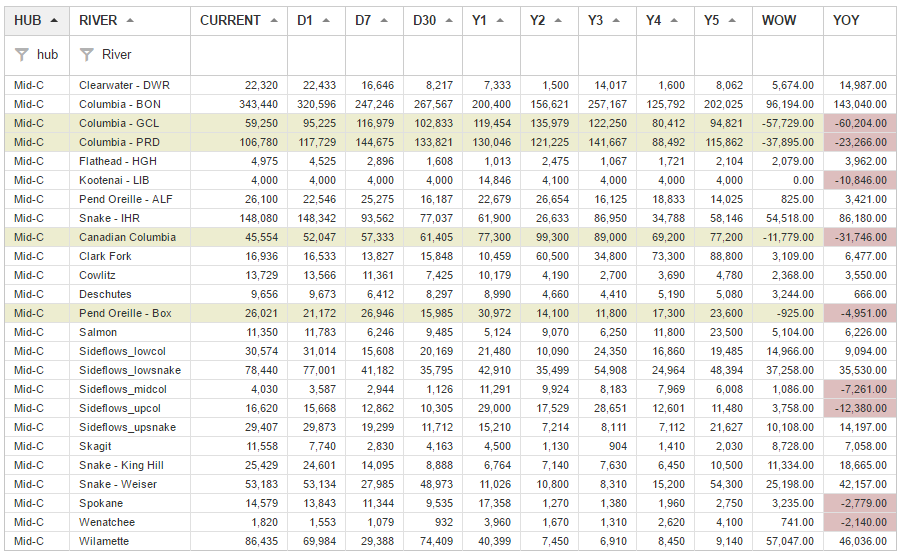 The warmup in the Northwest is showing its effects on rivers as the majority are reporting large week-over-week increases.  Snake at  Weiser nearly double its weekly CFS and is up 382% from the same day last year.  The Spokane River reversed its slowdown from last week is now back above 14,000 CFS thanks in part to a further low-level snow melt and moderate rain.

Looking at the snowpack levels by river basins we can see that much of the increase in CFS for the Snake could be attributed to snow melt where all but the Boise Basin decreased week over week.  Spokane River basin increased its snowpack despite the river’s CFS increase further pointing to low-level snow melt as the source.

In a sign of the changing seasons, the 10 Day River Forecast Center is projecting steady increases through the next week with a peak on the 21st at 23,797 MW.  Today’s update includes slight reductions for the 15th through the 19th.

After consecutive days of decreases last week, gas outages have climbed back above 5000 MW to 5166 MW today.  Solar jumped from 0 MW to 638 MW over the weekend while every other source stayed flat.

Mid-C wind broke 3000 MW three times during the past week and the forecast shows potential for several more opportunities in the following days.  Today marks the highest point in the forecast. 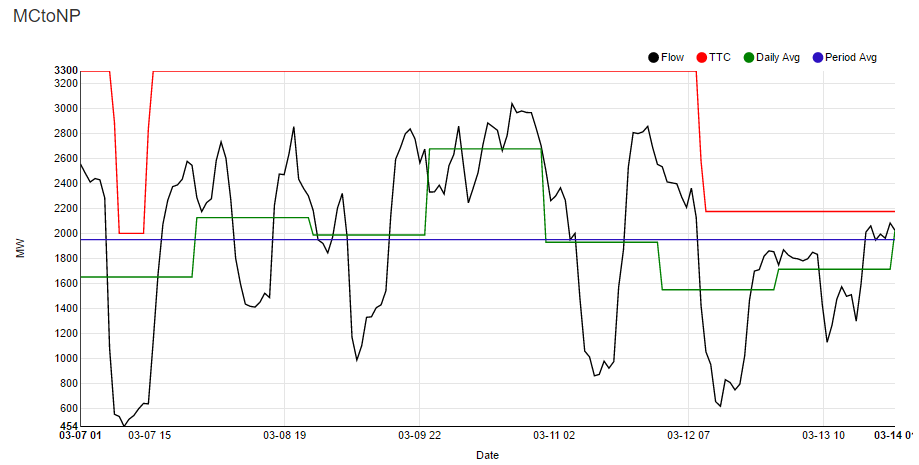 TTC decreased to 2175 MW during the late morning of the 12th marking the first change in TTC in give days.  Flow decreased rapidly in response, bottoming out at 616 MW and dropping the daily average to 1549 MW, a weekly low.  TTC has held steady at 2175 MW since the initial drop, and we’ve seen flow get within 100 MW of that mark (early this morning).

TTC decreased 50 MW to 2350 MW yesterday afternoon.  Despite the relatively small change in capacity, the daily average plummeted more than 1300 MW to -533.  Yesterday marked the first net-import day for Mid-C since the 8th of March.