After peaking at 91% at the beginning of the month, the Grand Coulee reservoir has drawn down to 72% capacity as of the 28th.

Most NP15 rivers have receded after heavy rains over the previous 10 days, with Sacramento the exception as flows have actually increased 18% week-over-week. 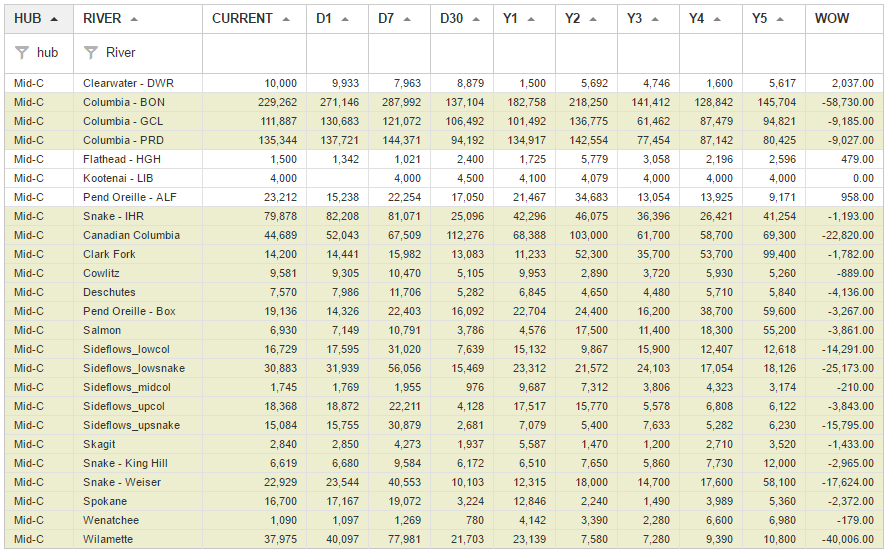 Similar story in Mid-C as all but four rivers are down week over week as well.  Snake at  Weiser is down over 17,000 CFS week-over-week, and the Wilamette dropped 40,000 CFS.  Clearwater – DWR had the largest gain at 2,037 CFS.

Pend Oreille – Box is one of the few Mid-C rivers to show a year-over-year decrease.  It currently sits at 3,500 CFS less than last year, though there hasn’t been much melt to add to its flow.

With temperatures dropping back below normal last week, demand increased sharply.  Loads were up 2200 MW week-over-week yesterday, and over 3000 MW year-over-year.

SP15 demand didn’t get the dramatic year-over-year changes that we saw in Mid-C, but there was an increase over last week and loads were over 1500 MW higher.  Demand saw an annual difference of just 74 MW yesterday. 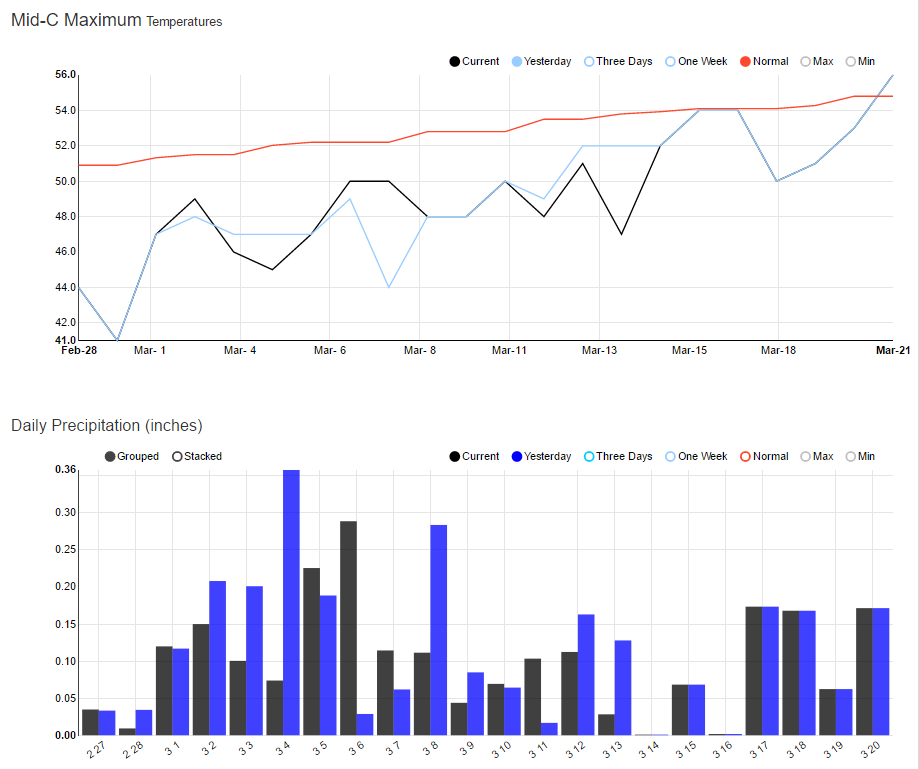 Cooler than normal temperatures persist in Mid-C as min-temps aren’t expected to approach normal until mid way through March.  Precipitation was pushed back a few days beginning on the 3rd of March, though nothing of major significance is expected any time soon. 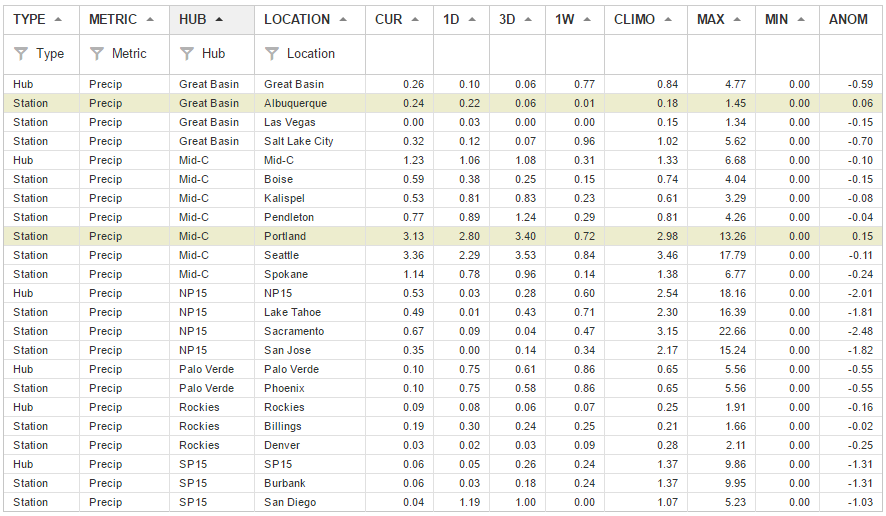 It’s not just Mid-C that is expecting to dry out a bit as all but two stations are pacing to fall below 10-day averages, and the two that aren’t (Albuquerque and Portland) are just a few hundredths of an inch above normal. 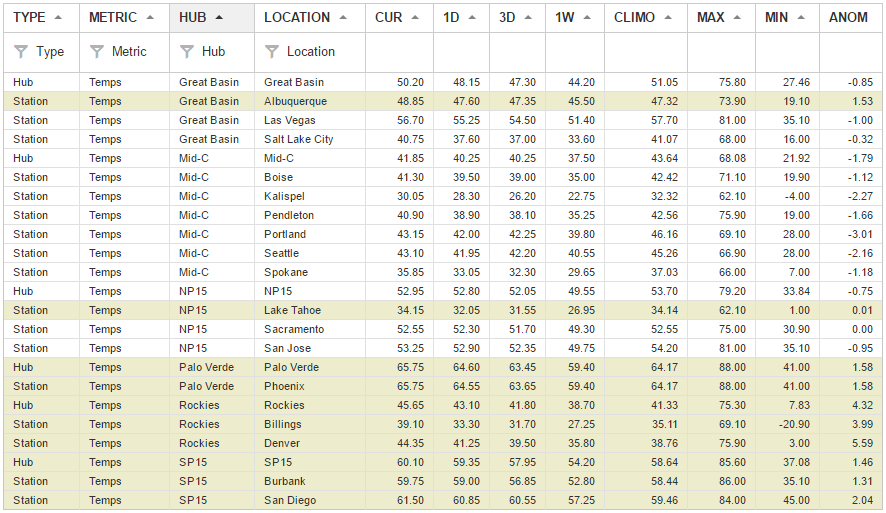 There is a lot more variation when look at temps however.  Mid-C and Great Basin are mostly colder than normal while Rockies, Palo Verde, and SP-15 should expect above normal temps over the next ten days as an aggregate.  Denver shows the largest anomaly at more than 5 degrees above normal.

Gas outages continue to come back online as we’ve seen 1654 MW return after peaking last Monday at 4153 MW offline.  200 MW of hydro came offline in the same time span in addition to 250 MW of wind.

Week-over-week demand is up in all hubs outside of SP15 and Great Basin where both hubs showed small decreases.  NP15 is the only hub to increase demand month-over month as it’s currently 105 MMCF higher. 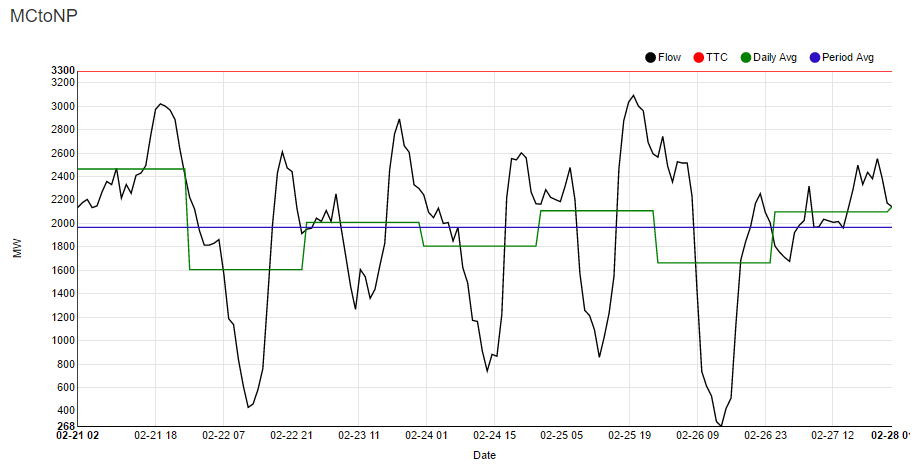 TTC has held stead at 3300 MW for more than a week straight, while flow has moved all over the board during the same stretch.  We saw a peak during the late hours of the 25th at 3092 MW followed by a sharp decline to 268 MW mid-day of the 26th for what amounted to the weekly low. 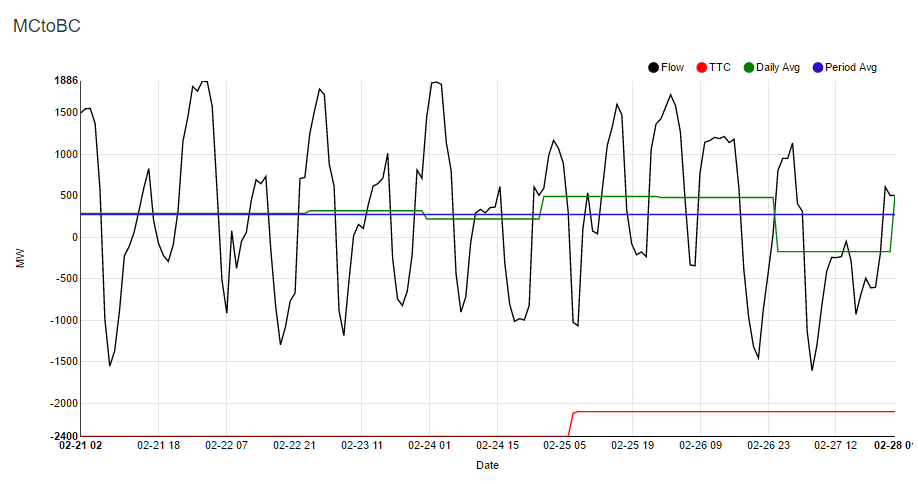 MC-BC continues last week’s trend of alternating directional flows as the week long average ended at 277 MW yesterday.  The seven day high reach 1873 MW on the 24th, while the low was hit yesterday at 1607 MW.  TTC moved from 2400 MW to 2100 MW on the morning of the 25th and has held steady since.