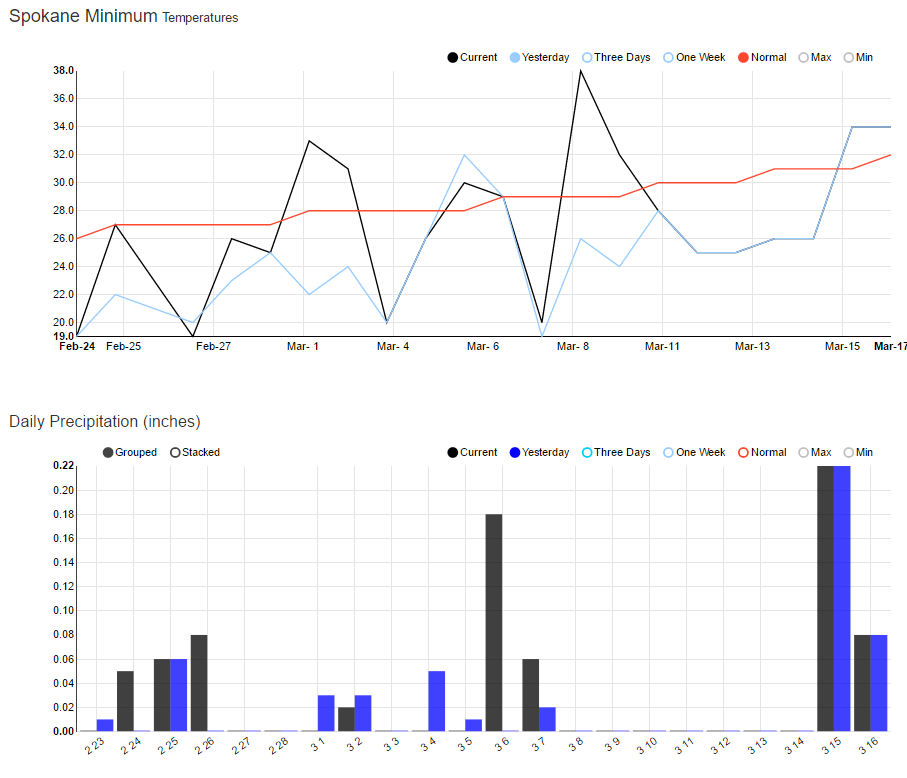 Spokane will bounce back and forth between normal temps over the next two weeks, though will remain primarily below normal.  Precipitation won’t add up to much more than a trace until well into March.

Max temps tell a different story as they won’t reach (or hardly even approach) normal temps until March 10th.  This long cooling spell should allow the remaining low-level snow to linger for at least a couple more weeks. 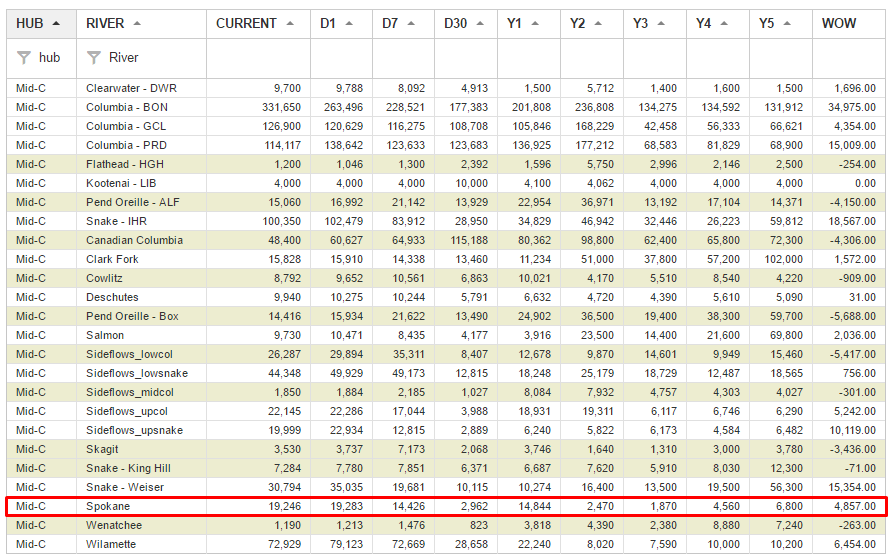 Speaking of low-level snow melt, this table gives us a good look into how much took place during last week’s mild warming period.  The Spokane River is up 550% from last month, and remains elevated even from seven days ago (by around 33%). 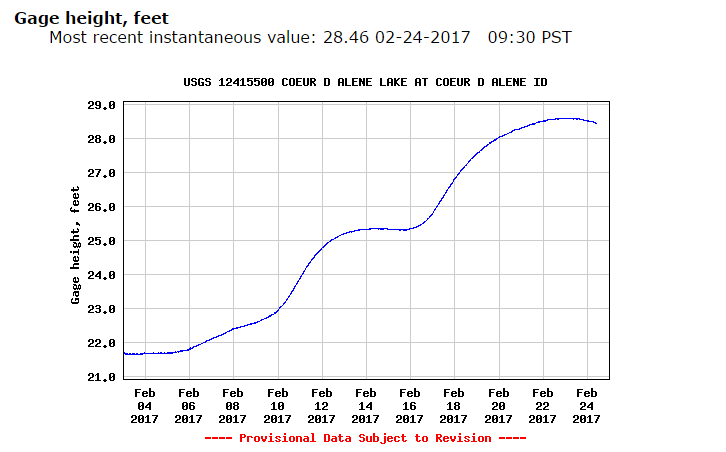 The increase in Spokane River CFS is high enough to warrant double checking its source.  A peak into Lake Coeur d’Alene elevation data quickly tells us that despite the heavy increase out of the lake (and into the Spokane River), the lake elevation is still increasing.  Worth noting that the CFS increase was heavy correlated to local melt and not an artificial increase. 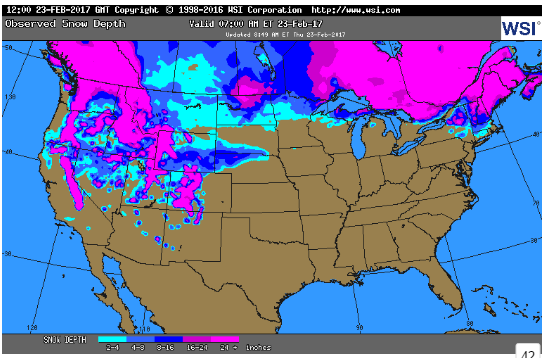 The observed snow depth map suggests there is still plenty of snow on the ground throughout much of Eastern Washington, Northern Idaho, and Western Montana, despite the warmup last week.  With cooler temperatures persisting, as noted earlier, the low-level snow should still have a decent impact before anything in the mountains begins melting. 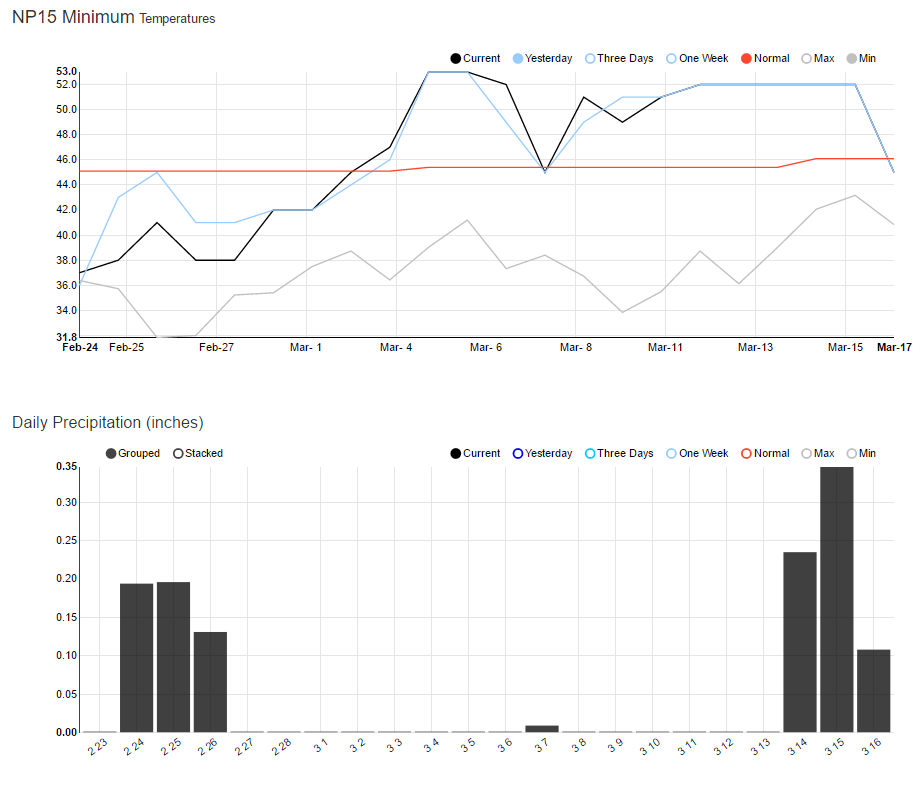 NP-15 will come within a degree of a new 10-year low today as min temperatures are forecasted at 37 degrees, seven degrees below normal.  Temps were forecasted lower (compared to yesterday) through the end of the month, and won’t reach normal again until March 3rd.

There should be measurable precip each of the next three days, with a peak of 0.20″ tomorrow.

Max NP-15 Temps are following a similar pattern, though should reach their lowest point on the 1st at 15 degrees below normal.

The rest of the west should see similar cool weather for the next few days as well.  Only San Diego is forecasted to have above normal temps, while Vegas, Boise, and Salt Lake should both see average temps more than five degrees below normal.

The 10-Day River Forecast should peak today at 18577 MW and steadily decrease from there over the following 10 days as cool temps and low precipitation hover over Mid-C.  There is little day-to-day change aside from the 25th-28th.

Just a handful of Mid-C snow stations are reporting below normal, and the lowest still checks in at 92%.  Cowlitz Lewis shows the largest anomaly at 154%, though Middle Snake with 152.9% of normal coupled with a much higher downstream capacity, appears much more significant.

Mid-C demand has shot up compared to last week as loads have increased 3240 MW.  Demand is also up 3035 MW year-over-year during peak demand, and 3521 MW at its lowest.

NP15 isn’t showing much change in demand as week-over-week loads were up just over 500 MW yesterday, and just 200 MW year-over-year.  Light load hours for today are starting to show a little more separation compared to last week and last year. 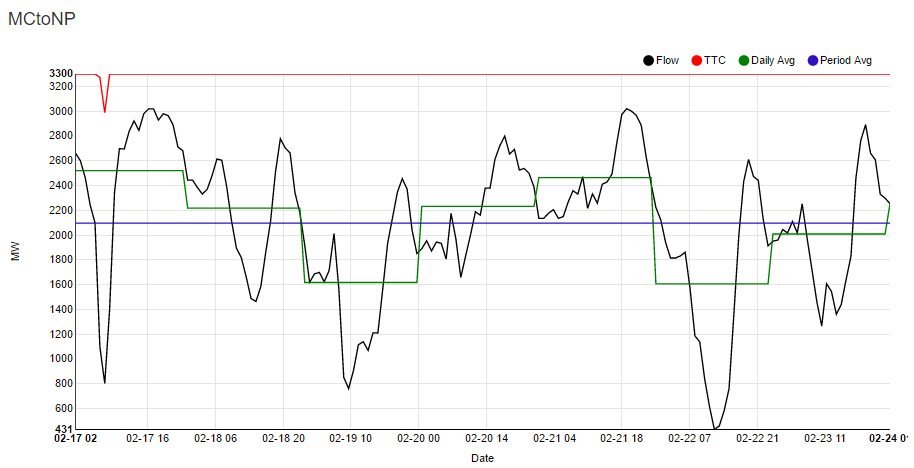 MC-NP flow crashed mid-day Wednesday when it got as low as 431 MW, the lowest point in at least a week, though it bounced back to 2610 MW a few hours later.  TTC continues to hold steady at 3300 MW, and flow settled at 2096 MW for the weekly average (very close to yesterday’s daily average of 2009 MW). 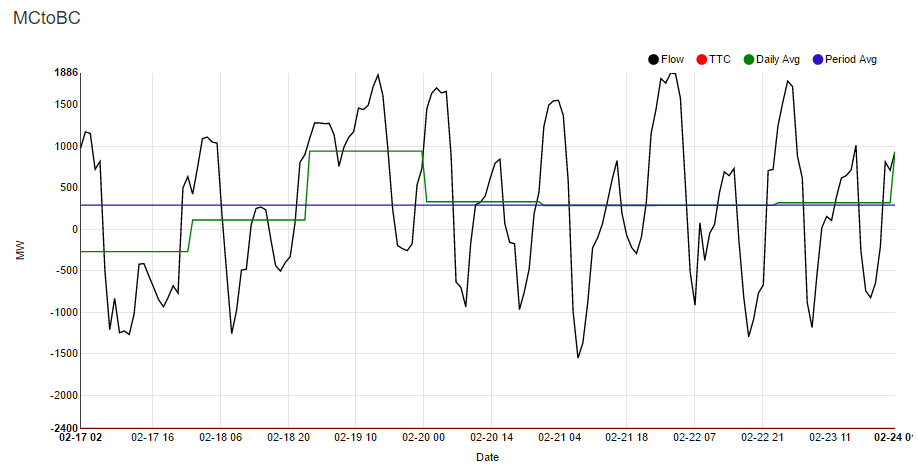 The Mid-C to BC line has had very little deviation from the period average (293 MW) over the past several days as the largest difference came in on the 20th at 41 MW.  Flow reached a peak of 1886 MW during the early hours of the 22nd.