SoCal Citygate showed the largest daily movement with an increase of $0.18.  SoCal Border Avg. is up $0.04 and El Paso non-Bondad is up $0.03, while all other hubs are within a couple cents of yesterday. 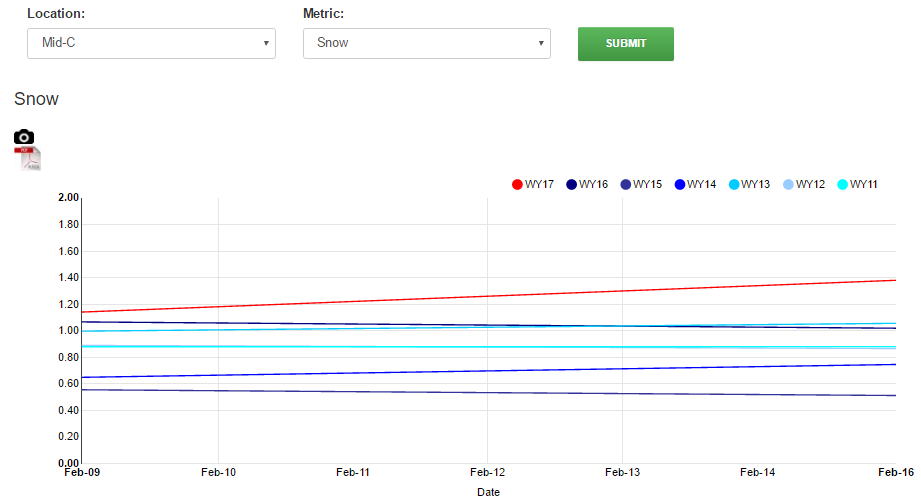 Not a lot of week-to-week change in power hub aggregate snow supply, though each is down a bit from last week.  NP-15 showed the largest decrease, but every hub is still significantly above normal and is pacing for the highest snowpack of the decade.

Grand Coulee continues its sharp decline in reservoir level that began at the beginning of the month.  It’s dropped from 91% on Feb-2nd to 84% today.

The 10-Day River Forecast should peak on the 17th, though the projection is a decent drop from yesterday (by more than 700 MW), and an even larger drop from two days ago.

Loads are down 260 MW week-over-week as milder highs have moved into the area.  Despite the reprieve in below-normal daily highs, cool temperatures have persisted at night, and it’s reflected in LL loads as they are up 582 MW week-over-week.  Both HL and LL are well above last year.

NP-15 loads continue to elevate beyond last year (up 750 MW year-over-year), though are 530 MW below last week’s high. 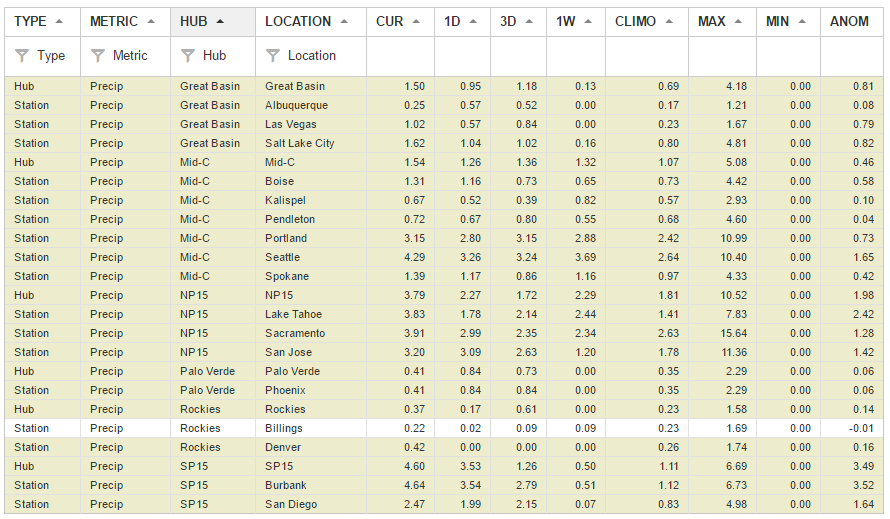 There is a little more variance when looking at temps (as opposed to precipitation)  as most hubs are mixed.  Denver will again get much milder temperatures than normal as they are projected to have an average temperature nearly 14 degrees above normal. 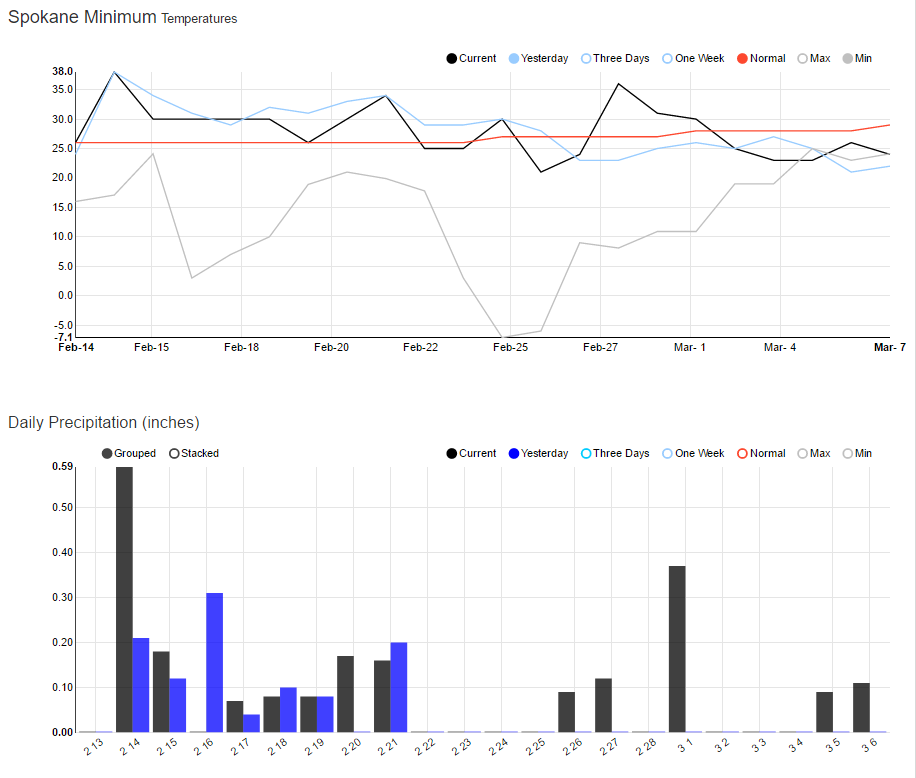 More potential for low-level runoff as Spokane will hover at or just above freezing for the next few days.  Couple that with significant precipitation and the Spokane River could start flowing a little more than normal.

The Spokane River is already up significantly since the beginning of the month, thanks in part to previously mentioned low-level snow melt.  We’ll check on this chart again soon to see how much of an impact the next system brings. 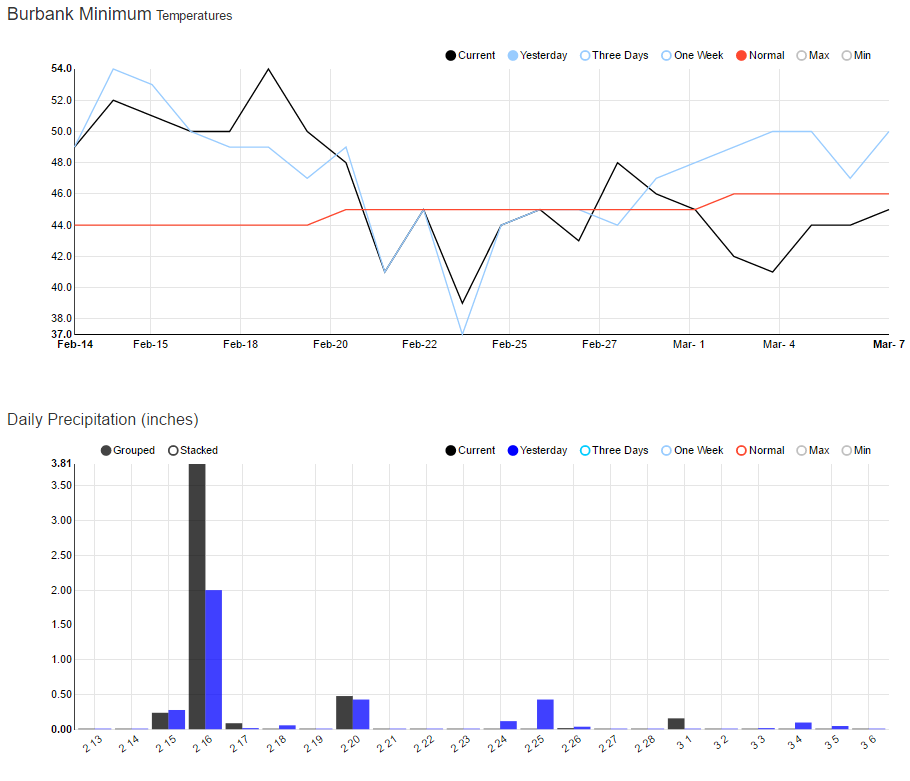 Here’s a closer look at Southern California’s forecast (Burbank specifically).  It appears that this is the winter that keeps on giving as there could be more than three inches of rain falling in the area this weekend.  Minimum temperatures are also expected to be close to ten degrees above normal (though it should be noted the high will fall below normal…wet and mild will be defined this weekend).

Gas outages have continued to come back online since their high point of 4110 MW was reached on the 10th, and now sits at 3809 MW.  Hydro jumped over the weekend thanks to a well-publicized faulty dam for a total of 766 MW of outages. 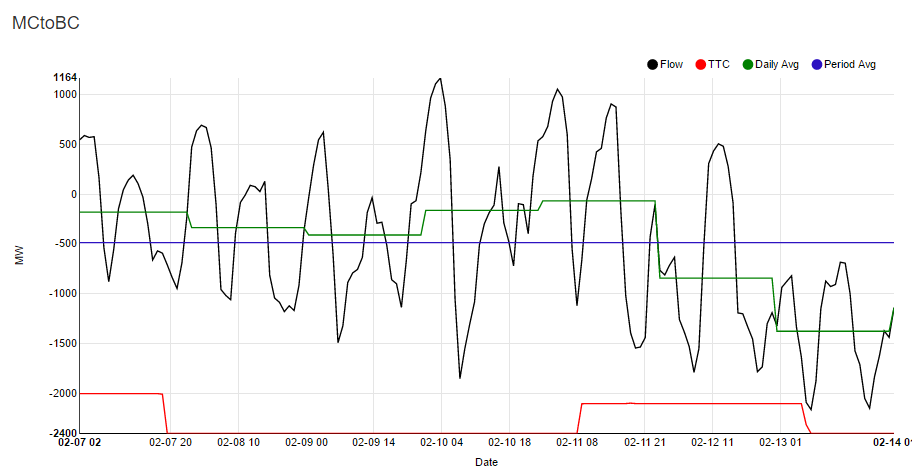