Grand Coulee is sitting at 87% capacity, but has next week’s warm-up looming on the horizon as much of the low-level snow is preparing to melt.

87% capacity for Grand Coulee is exactly the average of the previous three years (84%, 90%, 87% respectively), but while we typically see that number decrease in the following weeks, a low-level snow melt like we expect next week could alter projections.

Snow earlier this week pushed Mid-C well beyond the 100% barrier leaving every hub in the west above normal.  NP and SP each increased nearly 50 percentage points over last week primarily thanks to the massive storm that several feet of snow in the span of a couple days.  The Sierra Nevada has already reached 69% of its annual snow fall and has a great shot of breaking 100% for the first time since 2011.

It’s worth noting not only the massive week-over-week increases to NP rivers, but also how much higher they are than previous years.  The Cosumnes is up more than 16,000 CFS week over week, which is obviously a lot, but is even more impressive when you note that it ran at only 25 CFS three years ago.

Quick look at the historical chart to put it all in perspective as the Consumnes has more than tripled the previous six-year high (5846 CFS). set back in 2011.

While temps aren’t nearly as cold as last week, Mid-C remains cool, and demand has creeped back up a bit over the past few days.  Loads are down 1662 MW from last week, but remain well above last year with more demand more than 4100 MW higher.

Taking a closer look at just how much Mid-C may warm up and you’ll see that it might not be as much as was first forecasted, but should still be enough to see decent low-level runoff.  The warm-up has been pushed back another day, and cooled a couple degrees.

Even if Mid-C temps don’t reach the upper-40s, the weather will bring significant precipitation, and it should fall as rain.  Over 0.4″ should fall on both Monday and Tuesday. 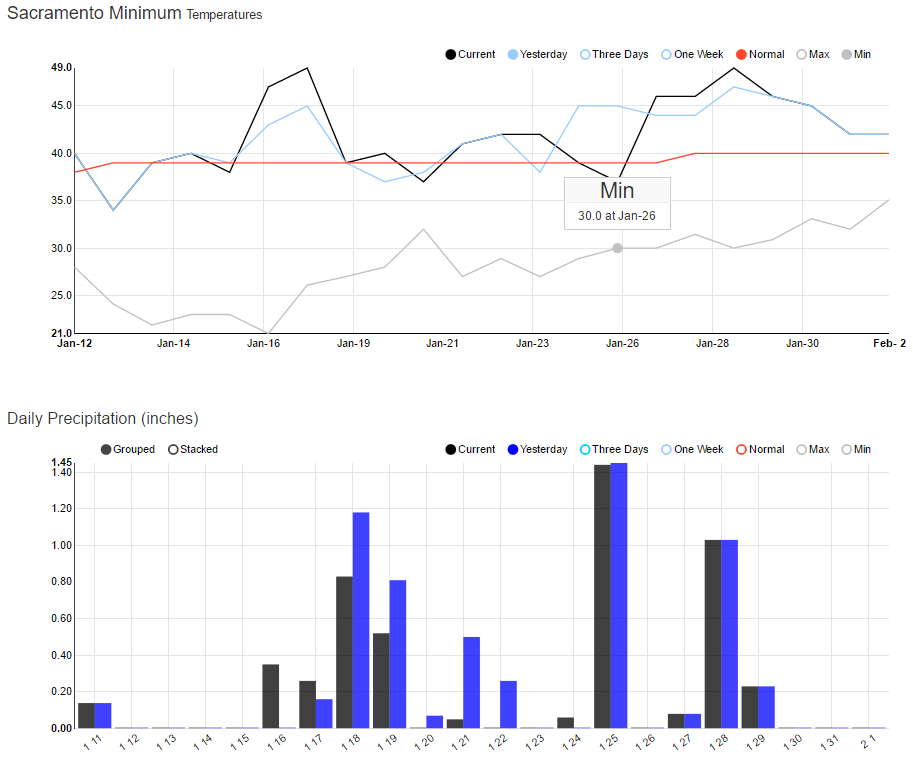 We’re expecting to see mild, wet weather in Northern California as well.  Minimum temps in Sacramento could be as much as ten degrees above normal on the 16th, and could get over 0.25″ of rain for four consecutive days, highlighted by 0.83″ on the 18th.  Talk of the end of the Californian drought is sure to get a little louder.

Gas outages have held steady at 2698 MW, and solar again increased and now sits at 715 MW.  Total outages are up more than 2600 MW since the beginning of the year.

Mid-C gas demand hit a high of 2084 MMCF last week and is again on its way back up as a brief cold-spell has settled into the Northwest.  Last week’s high was more than 300 MMCF higher than any level of demand reached last year. 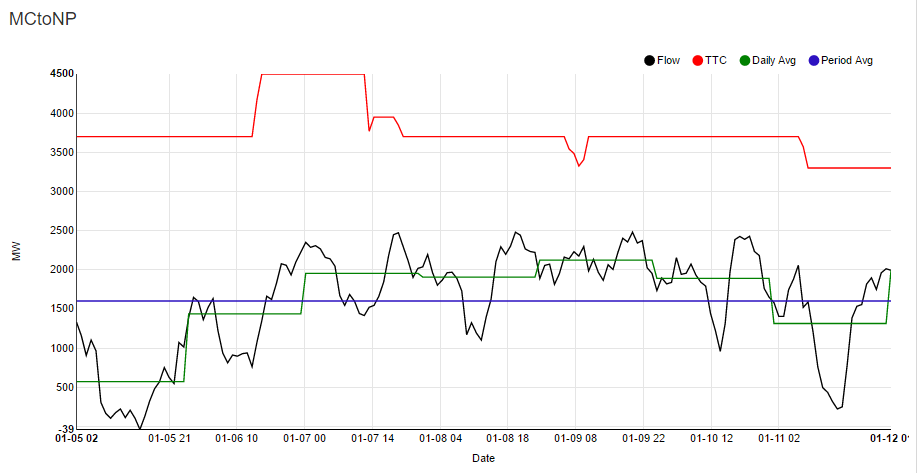 TTC dropped again yesterday and has now settled at 3300 MW.  Flow dropped to a weekly now of 223 MW yesterday afternoon bringing the daily average to 1315 MW, the lowest since last week’s cold spell. 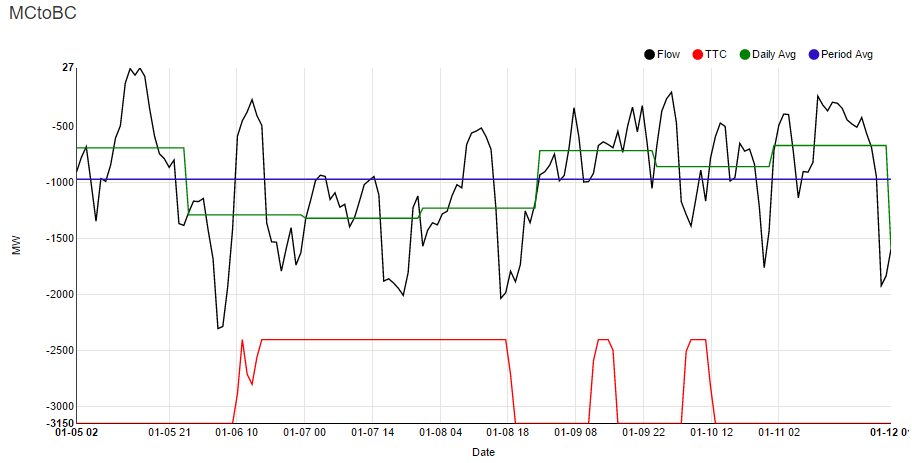