A new cold front looms on the northwest while reservoirs get a brief hiatus from withdrawals. and the snow pack builds.  Here are a few other highlights of what’s going on in the west today.

Grand Coulee has been able to replenish at least some of its reservoir for the first time in two weeks.  The low on Dec 25th (85%) was the same level seen on Sept 19th.  With more frigid temperatures on their way this weekend, expect reserves to drop even further.

Another snowstorm moved through the northwest last night and this morning, so we should expect these hub-level snow reports to increase further.  Mid-C is sitting at 97% of normal, but could jump above 100% as the snow sites trickle in with new data.

Demand has tapered off from the last cold front to hit Mid-C, and now finds itself literally in the middle of the calm before the storm as frigid temps loom on the West Coast.  Demand is now below last year for the first time in weeks, and is more than 2200 MW below last week’s loads.

Cool temperatures have been revised to frigid for next week, even at a hub level.  Mid-C composite temps could drop as low as 18 for Jan-4th, and will be below normal for at least the first week of the new year.  These temps are six degrees cooler than what was forecasted yesterday.

While not nearly as cold as Mid-C, NP will still get temps much cooler than normal.  We could see composite temps hug the freezing level on the 5th as the forecast currently calls for 33 degrees.

Palo Verde and Rockies are the only hubs currently sitting above normal. 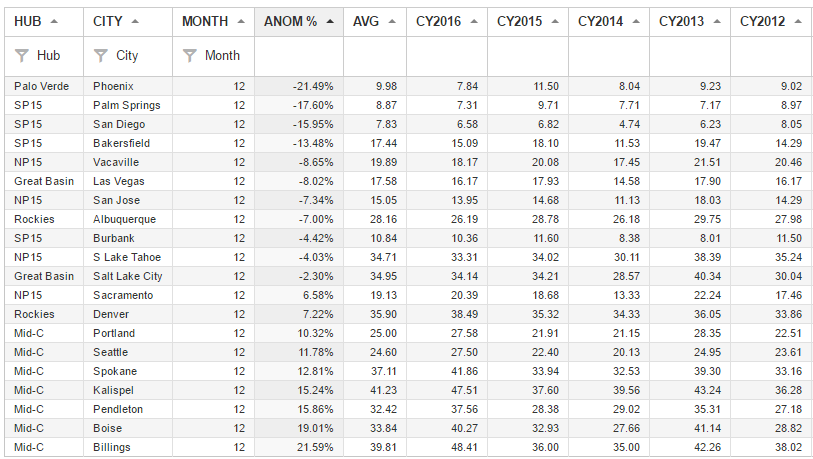 As December comes to an end we can clearly see the affect that the past couple cold fronts have had on the Northwest.  Every major Mid-C population center is showing average degree days at more than 10% above normal.

Outages have remained largely unchanged for the last week.  Wind had 170 MW return on the 23rd, and gas has hovered around 1400 MW of outage since the 22nd.

Mid-C gas demand has settled between 1650 and 1700 MMCF after peaking at 2090 MMCF on the 18th.  With forecasts predicting temps even colder than last week, we should see gas demand peak above 2000 MMCF again.

Mid-C wind has been in a bit of a lull since Saturday, but has potential to reach significant generation over the next week.  Dec 20th marked a week-long high of more than 4000 MW.  We could see similar generation tomorrow as well. 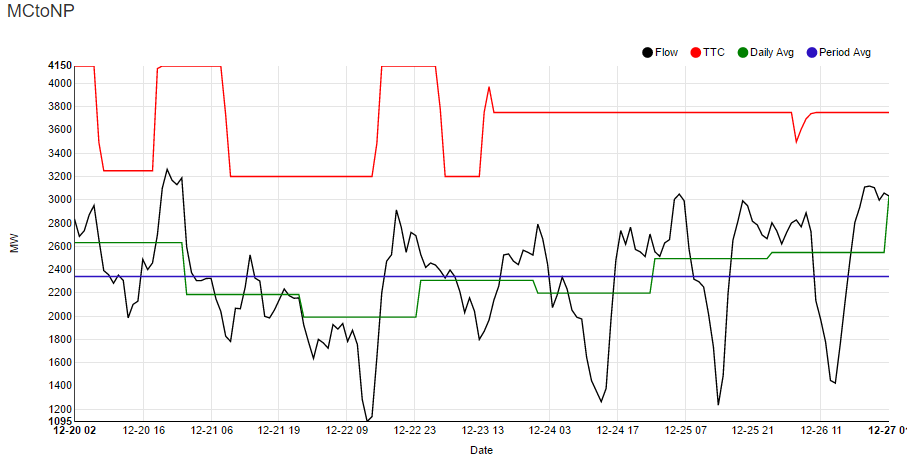 After fairly erratic week, it looks like TTC has settled, for the most part, at 3750 MW.  Flow has been slowly ramping up since the 23rd, and reached a week high of 3110 MW yesterday. 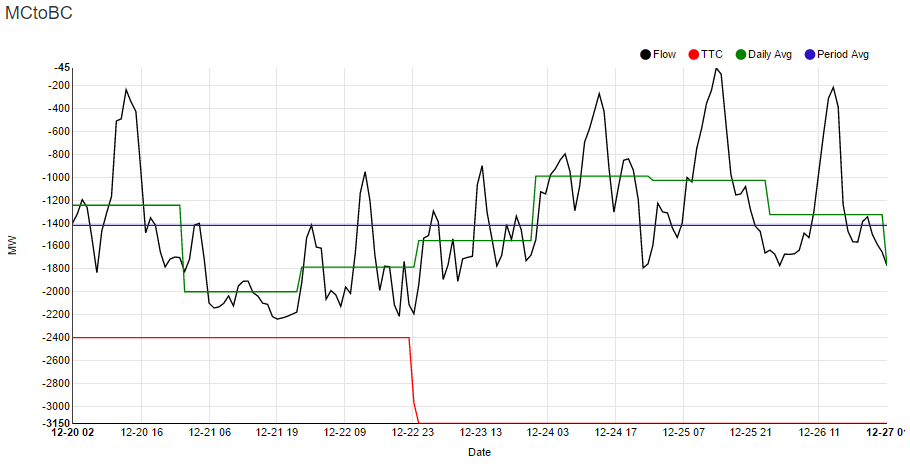 Daily averages stepped up through most of last week before again coming off yesterday, though flow flirted with 0 on Sunday and again yesterday.  We’ll keep an eye on whether BC again imports during the coming cold front.