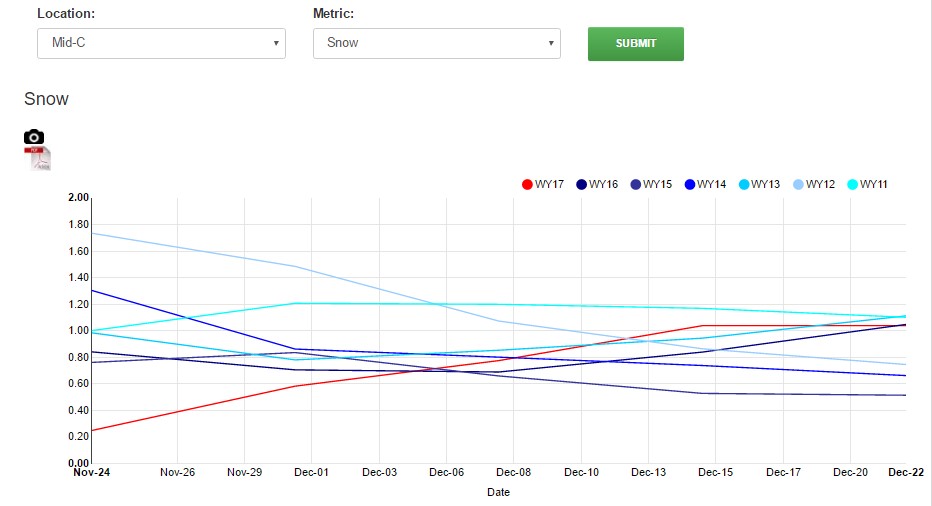 The past week brought cold weather and a decent amount of precipitation across Mid-C, and the snow chart is reflecting that.  The 2017 snow year trails only 2011 over the past six years, as of December 15th.

Taking a peak at Ansergy’s updated Water Supply Summary report, we can see that the Flathead basin has continued to pace well above the 10-year normal, and even increased 1.9 percentage points from yesterday.  7 of 15 basins are below normal, though two of those sit at more than 98%.

Extreme cold temperatures took a temporary leave of absence over the weekend, and loads decreased in turn.  Loads are down 1,046 MW week-over-week, though with temperatures even colder than last week, demand will increase rapidly.

As should be expected, the extreme cold weather will also be dry in Seattle.  There isn’t expected to be any precipition in the area until the 17th.

While NP15 and PV are both expected to see sligtly higher than normal tempertures over the next ten days, Mid-C is forecasted to see an aggregate temperature 6.8 degrees below normal, by far the largest anomly among the hubs.

The 10-Day River Forecast is projected higher than the STP forecast for each of the next ten days.  Avg MW for the 10-Day Forecast remains largely unchanged from yesterday to today.

Nearly 1700 MW of gas has come back online across the ISO since Dec-9th.  Along with gas, we also saw significant return in Solar over the weekend.  Hydro remains mostly unchanged.

Solar generation in SP15 hit a trough on the 10th, and has been slowly ramping up generation ever since.  Today shows potential for over 5000 MW followed by slightly lower totals in the following week.

The cold front looming onto Mid-C should allow for some wind generation today and tomorrow.  Last week peaked at 2836 MW on the 11th.