Every hub is up day-over-day. SoCal Border Avg. showed the largest nominal increase ($0.46), or 19.7%. Cheyenne Hub increased the least, but still $0.37 higher than yesterday.

NP15 loads also increased over the past two days while also coming just shy of last year’s demand (around 500 MW less).  2016 loads have fallen below 2015 for each of the past 14 days.

Mid-C 2016 loads continue to fall well below last year’s demand.  The difference in loads reached a peak yesterday with a gap of nearly 5000 MW.  Loads are down 670 MW week-over-week as well.

The cold spell that was expected to hit Burbank next week has been reforecasted several degrees higher (from 4 degrees below normal to 2 degrees above normal).

Minimum temepratures are inching even further below normal heading into next week as the 6th could drop to 14-degrees below normal (11F).  Daily minimums are currently forecasted to hover in the teens for the week after as well.

The 10-Day River Forecast is showing an increase over yesterday’s STP for each of the next four days.

Solar generation dropped close to 2000 MW from the previous week’s average over the past three days.  Solar should bounce back today with a chance to peak at 5232 MW.  The rest of the week should slowly decline before reaching high potential generation on the 6th (over 6000 MW).

Wind generation peaked at over 4000 MW each of the last two days, though today is expected to fall well below 3000 MW.  Wind should stay relatively calm for most of the next week though there are a few hours of potential on the 1st and 2nd of December. 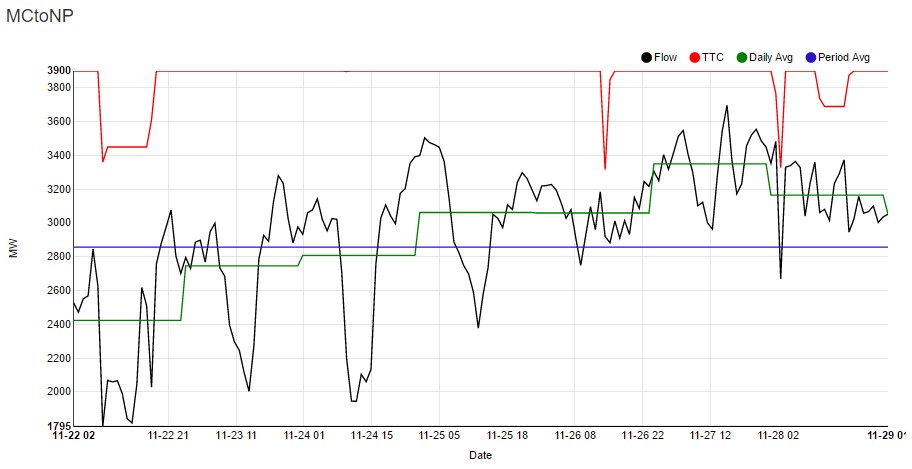 TTC has had a few brief drops over the past three days, but has since returned to 3900 MW.  Flow appeared to have only been affected on the 28th at 3:00 AM when TTC decreased 600 MW and flow dropped nearly 800 MW.  Average flow is down from yesterday but still considerably above the previous week’s average. 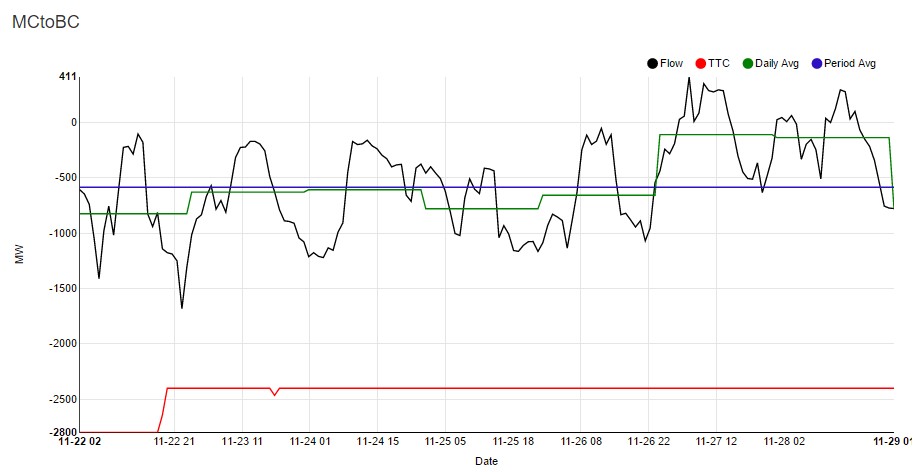 Mid-C to BC reached positive territory briefly in each of the last two days, though the daily average remains negative (-110 on the 27th and -138 yesterday).  Flow hit a high of 295 MW yesterday at 2:00 PM.