SP15 finally starts cooling off, and Portland gets a massive amount of rainfall.  Here’s what else is going on in the west.

The market has been fairly volatile the past two mornings with each showing a large drop after 7:00 AM.  Today has been mostly higher than yesterday through the early morning.

Yesterday rose out of negative prices in the late morning, and averaged around $16 before reaching a peak of $113 at 4:30 PM.  Prices hovered between $20 to $40 thereafter.

SP15 loads continue to land well above last year’s demand.  Yesterday was up close to 2000 MW year-over-year.  Compared to last week, yesterday was up rougly 1100 MW.

NP15 is a little less volatile in weekly and annual changes.  Demand is down 500 MW week-over-week and down 400 MW year-over-year.  Sunday marked the first annual decrease in over a week, and yesterday continued that trend.

Mid-C had a large year-over-year decrease in demand yesterday as the difference jumped to 4000 MW.  Loads have stayed relatively flat week-over-week with an increase of just 300 MW.

Today should mark the last day of a long string of above normal temperatures in Burbank.  The forecast calls for a drop of 11 degrees by tomorrow followed by relatively normal temps for the foreseeable future.

Very wet day in the Northwest, particularly in Portland where 1.25″ of precipitation fell.  Seattle was also wet (0.36″), though not nearly as extreme as Portland.

Each of the next ten days are showing large MW increases compared to the STP forecast released yesterday. 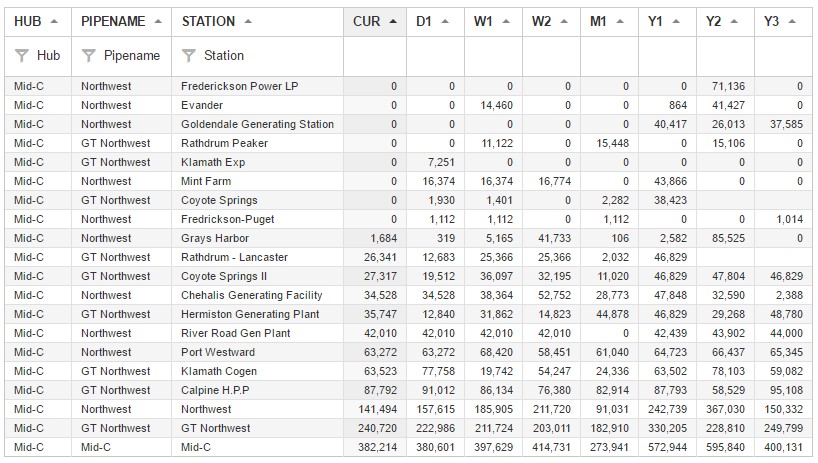 Mid-C as a whole increase 1600 MCF despite four plants dropping to 0 MCF.  Those decreases were largely negated by increases from Rathdrum – Lancaster and Coyote Springs II.

Solar generation is expected to peak at 6260 MW today which would be at least a seven day high.  Generation is forecast to slowly taper off for the next week, potentially hitting a low of 4565 MW on the 21st.

Mid-C hit a wind generation high of 3861 MW over the weekend, and could potentially top that today with a forecasted high 4858 MW.  Wind should slow down noticeably for the next week following today. 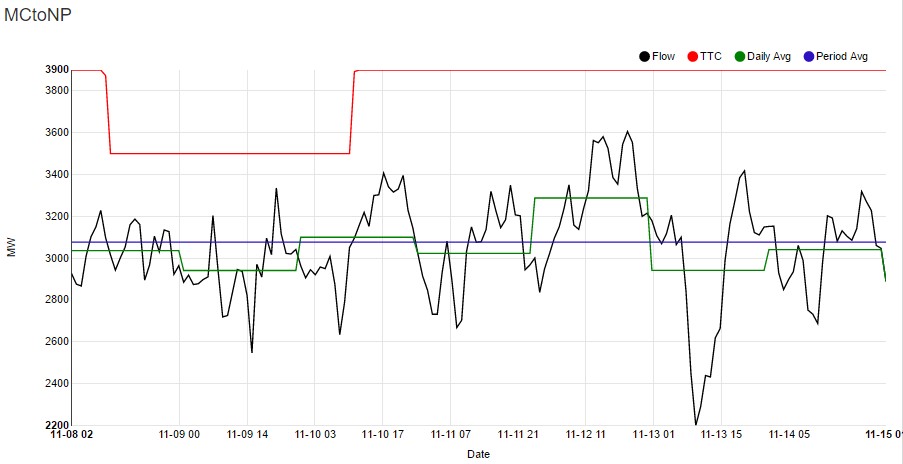 TTC increased by to 3900 MW over the weekend and flow slowly ramped back up in return.  The seven-day average for flow sits at 3077 MW today which was slightly reduced thanks to the low of 2200 MW on the 13th. 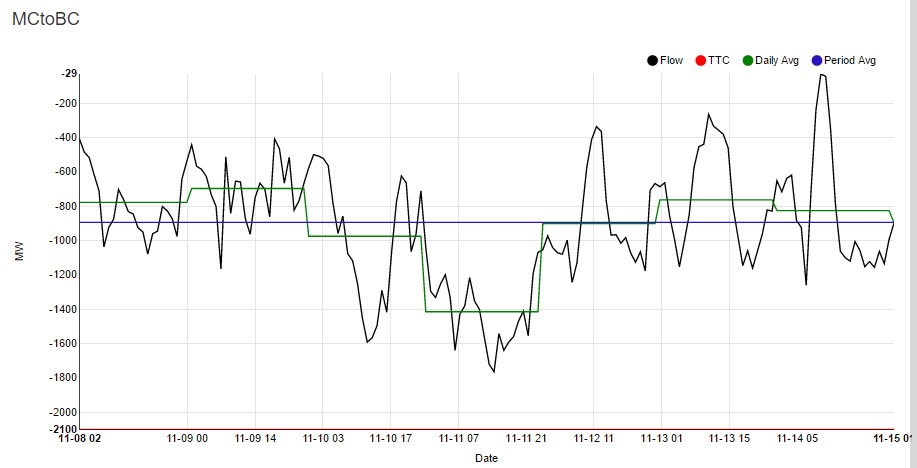 The seven-day average flow is at -893 MW for Mid-C to BC, though we saw a high yesterday approach 0 MW before peaking at -29 MW.