Today’s prices are higher than yesterday for all but a few ticks this morning.  LMP was in the middle of a spike as of 8:00 AM this morning, reaching $54.

Yesterday hit several peaks in LMP with a few ticks reaching above $1000, and others in the high 70s.

Mixed results with many hubs left unchanged and other moving a couple cents in either direction.  El Paso non-Bondad had the largest change with a decrease of $0.03.

SP15 loads are down close to 1100 MW week-over-week.  Year-over-year results are all over the board for the last seven days with an increase as high as 3700 MW on the 20th to a decrease of nearly 3000 MW yesterday.

Week-over-week loads are almost unchanged in NP15 with a decrease of just 140 MW yesterday.  NP loads have been reaching above last year’s levels fairly consistantly during morning hours.

The sharp increase in demand yesterday afternoon in Mid-C pushed the week-over-week loads to an increase of nearly 2400 MW at its peak.  Year-over-year loads have fallen below 2015 levels after showing an increase for much of last week.

Burbank is currently enjoying fairly normal temperatures but we are forecasting a couple changes in the following couple weeks.  Temps could dip down to ten-degrees below normal on the 1st only to jump nearly 20 degrees a week later.

Sacramento will be following a very similar pattern as Burbank though the deviation from normal temps looks like be a bit more extreme.

The Northwest should expect more significant rainfall beginning late tonight and early tomorrow morning.  Potentially could see nearly 0.75″ of rain fall in the next 24 hours in Portland.

10 Day River Forecast remains largely unchanged from yesterday’s STP report for the next five days.  Forecasts have increased quite a bit beginning on the 30th as compared to both the STP and yesterday’s 10 Day Forecast. 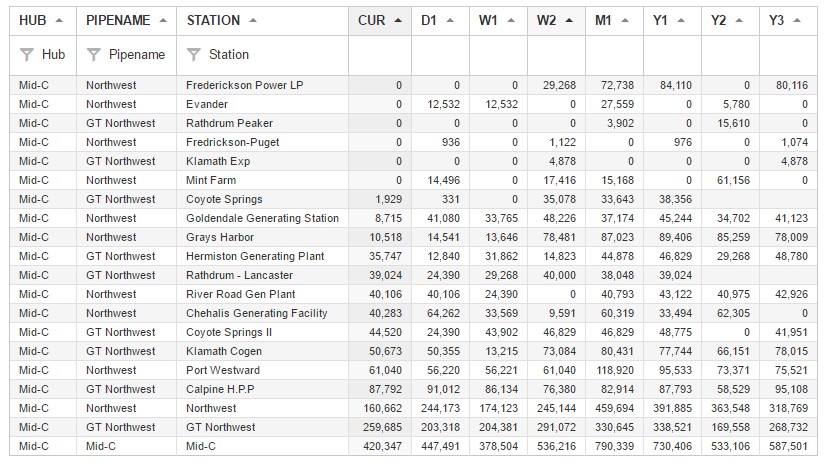 Several plants have dropped to 0 MCF since yesterday including Mint Farm and Evander.  Goldendale Generating Station decreased its MCF around 32,000.  Overall Mid-C dropped 27,000 MCF (overall decrease was partially made up for by the 25,000 MCF increase at Hermiston Generating Plant).

A lot of potential wind generation coming up in Mid-C including a forecasted spike of 4000 MW on the 30th.

SP15 is forecasting to hit a seven-day solar generation high of 6475 MW tomorrow.  Could potentially be the highest generation we see for a while if the forecasts hold true. 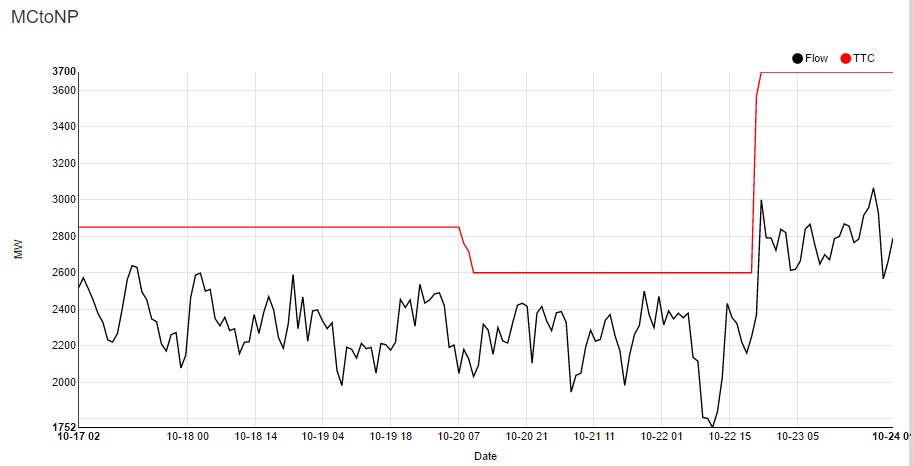 TTC has returned to 3700 MW after a nearly two week decrease that saw sub-3000 MW.  Flow has in turn increased as well reaching a peak of 3065 late Sunday night. 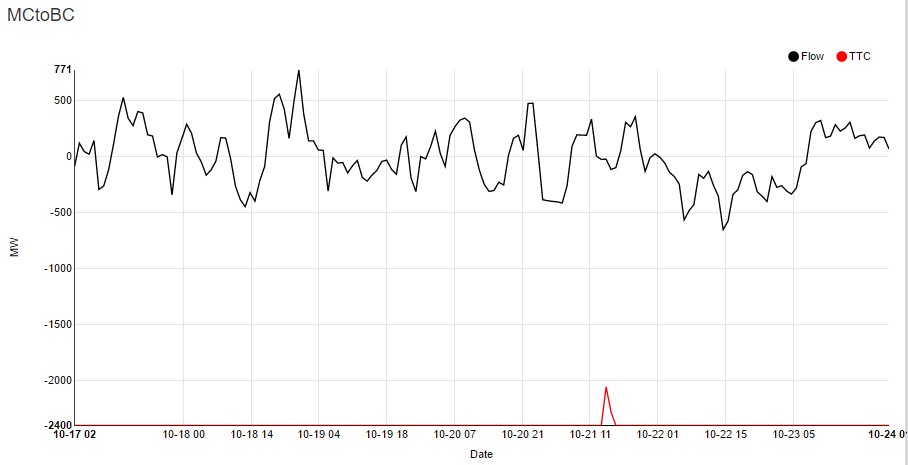 Flow moved south for most of the weekend before returning back to BC for the rest of Sunday where it reached a peak of 321 MW.

Have a great week!