The Mid-C is undergoing a material change in outlook driven by substantial precipitation, much of it coming down as snow, and more on the way.  The most recent weather forecast for the Mid-C shows another substantial storm striking where the production resides:

Note the storms on the 16th and 18th and keep in mind this is a production-weighted precip forecast.  Kalispel, MT is weighted 30%:

That is nearly a 1/2″ all of which comes down as snow in the Flathead and Kootenai basins.  Equally interesting is the departure from the forecasts ending last week.    The west side (Portland) will receive the brunt of the rain, and flooding will follow:

Again, it is not just the impressive volumes that stand out but the departure from last week’s forecasts.  The River Forecast Center sees this and their weekend update on the 10 day has turned materially bearish:

Watch for today’s forecast, it may be even greater than the weekend’s, and watch and expect today’s STP to put 500-1000 aMW into BOM, and probably half as much into Dec.    The cumulative precip realized in the northwest will go a long ways towards returning BPA’s reservoirs back to normal which will cast a longer-term bearish pall upon Q1, Q2, and possibly Q3.

Adding to the bearishness is the relatively warm weather across the northwest causing the seasonal load rally to be deferred into December, at least given the current 14 day outlook: 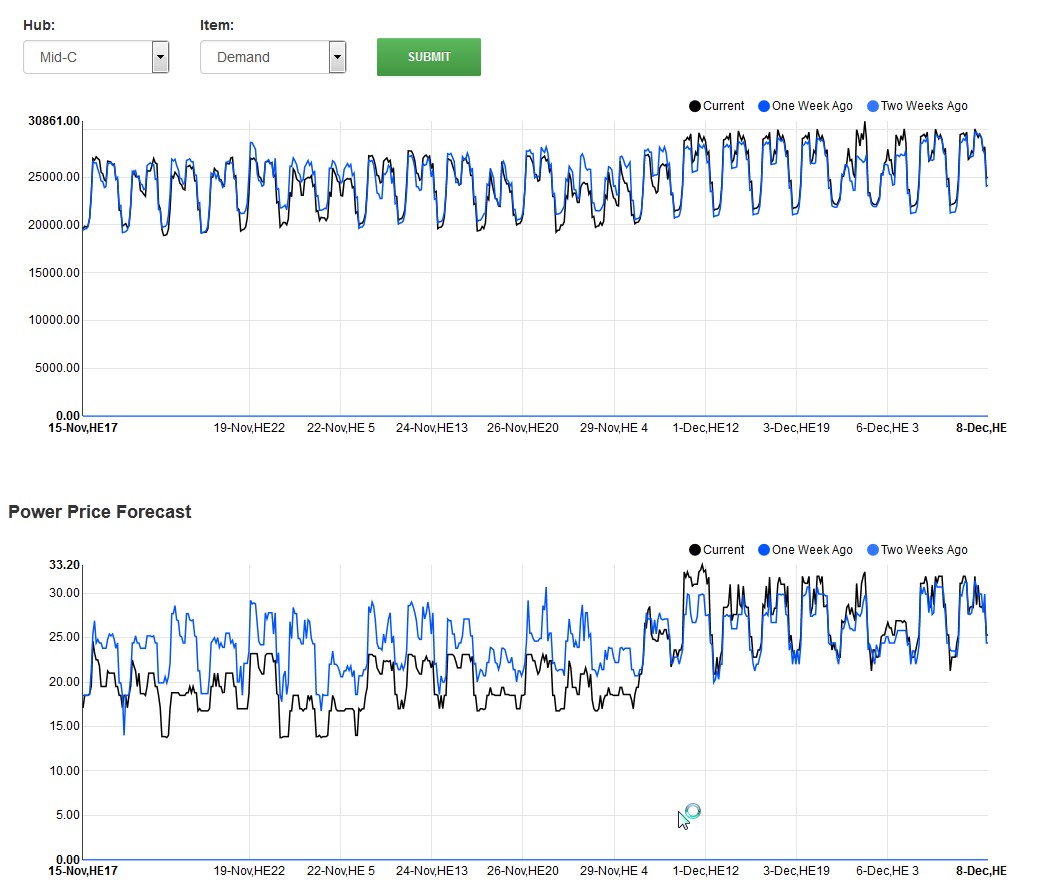 Ansergy’s forecasted price has been battered by the trifecta of falling demand (see above), rising hydro  and weak gas prices:

All this November water, in the final analysis, does not make a water year and we would caution everyone to not hit the panic puke button, just yet.  It’s November 16, plenty of time for more drama to be played out on the water stage.  In fact, here is a bullish nugget for you:  the latest El Nino 34 index posted a 3.0, a new all-time high.  The same week in 1997 was a more modest 2.7, though it was  the previous all-time high.  I’ll still wager TDA and GCL end the water year below normal.

Expect another post later today on the STP but watch this morning’s 10 day …should tip their hand.