Ansergy has added a new report, Daily Control Area Forecasts, that computes the following control area  metrics for daily on peak and off peak:

The following map summarizes the Ansergy Control Areas and the hubs they belong to: 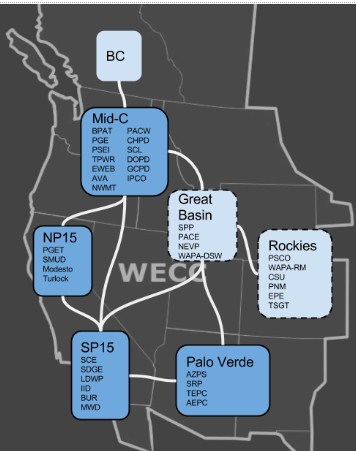 The following shows Puget’s  change in net  load for the off peak hours:

The utility will find itself getting shorter over the next few months and, as winter wanes, that short position becomes length with the ramping up of the runoff and warming spring weather.  Drill down into the elements (Loads, Hydro, or Wind) of the forecast to understand what is driving this:

As you can see the loads account for most of the swing in net position; the utility realizes an 800 MW increase at  winter peak and a 1400 MW drop in the midst of the spring doldrums.  Netting all three together returns Net Load:

The Change in Net Load is computed by taking today’s net load and subtracting that value from each of the forecast days.   If the analysis is missing something today (wind, load, contracts, hydro) that same value is missing from all the future forecast dates and thereby rendering the Net Change in Load a reasonable proxy for how a utlity’s position is changing across time.

If you have any questions feel free to contact me.