Northwest loads are drifting up on cooler weather; southwest loads are now mired in the trough of winter doldrums, but that is not what is relevant.  Water, lots of water, reached the northwest over the weekend, check out current river conditions in Washington state:

Those blue dots are above normal, black is near record; the northwest has not seen blue and black dots for a while, they are now.  Perhaps this is why the NWRFC has substantially jacked up its 10 forecast:

This is a material change from last week’s STP; Nov 1 is up nearly 2,000 MWs.  The 10 day bodes bearish to very bearish for today’s STP, though I struggle to see how a few inches of west-side rain can affect production as much as the RFC projects, not that it matters, the reality is not reality, it is what the govt perceives reality to be.  If the STP puts a gig in BOM its bearish, pure and simple, though none of this precip has found its way into the regulated lower Columbia:

The Dalles is unchanged over the last two weeks, so where is the new water?  I’d say most of it is in Lake Roosevelt: 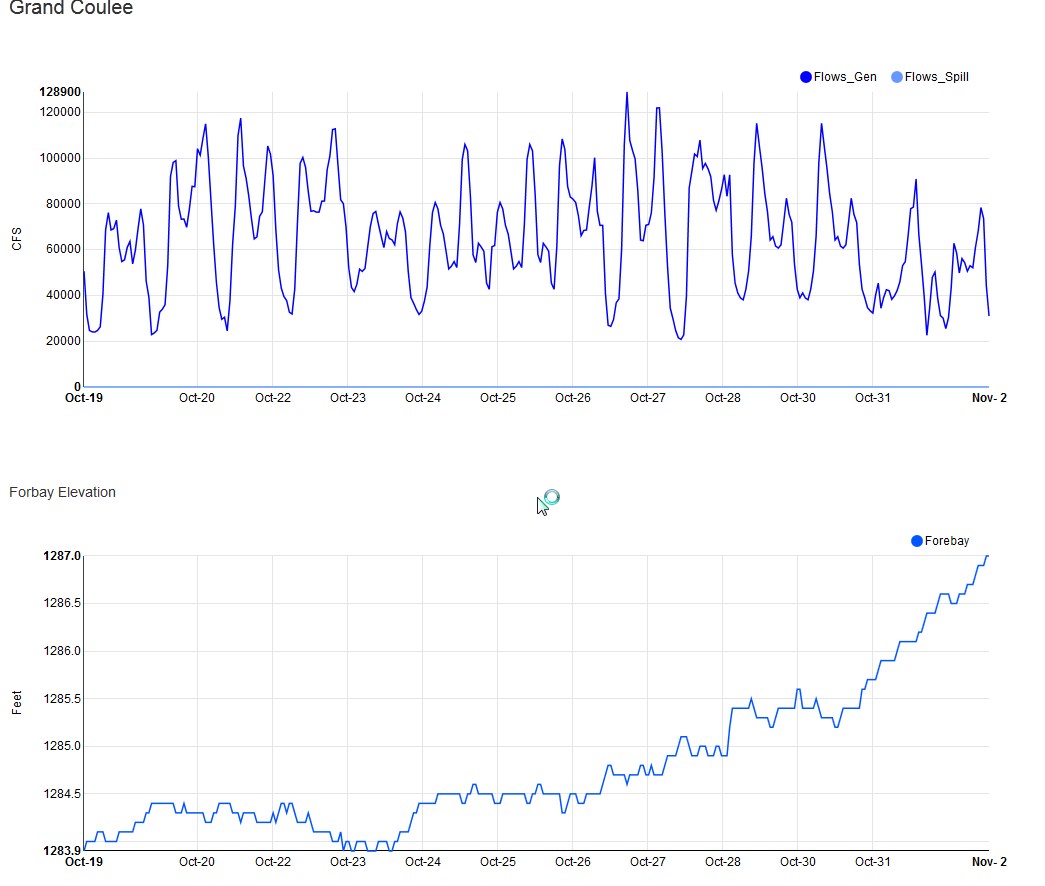 The spike in elevation coincides with the rain, though it’s a bit of a head fake as GCL outflows were cut over the weekend, but still its a substantial boost to BPA’s cold weather arsenal and we have no choice but to call it bearish BOM.  The precip is long over due as the following water supply plots (precip) for the Clark Fork, Flathead, Kootenai, and Salmon illustrate:

Don’t bother running the SWE …there isn’t much to see, everything is near 0.  All of these important basins are at five-year lows for Nov 2, though that is meaningless since one good storm will push them above normal.

Renewables are adding to the bearish BOM outlook with both Mid-C and SP cranking out the free energy:

Though Mid-C is by far the biggest beneficiary with nearly 2000 aMW more wind than last week.   Cali will get another 1000 MW when Diablo 2 returns, perhaps late next week, with the Palo unit right behind.  Overall it just doesn’t look bullish, and the weather forecasts are not helping.  The outlook for Mid-C is just neutral, SP is bearish. 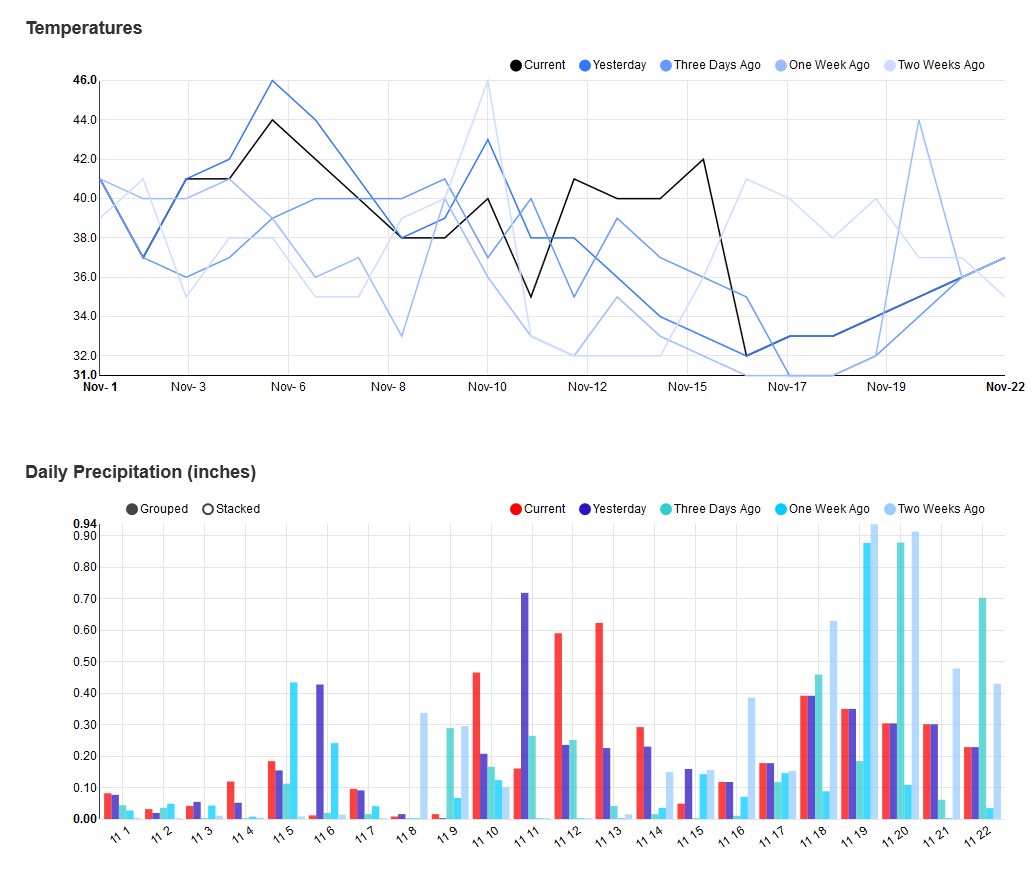 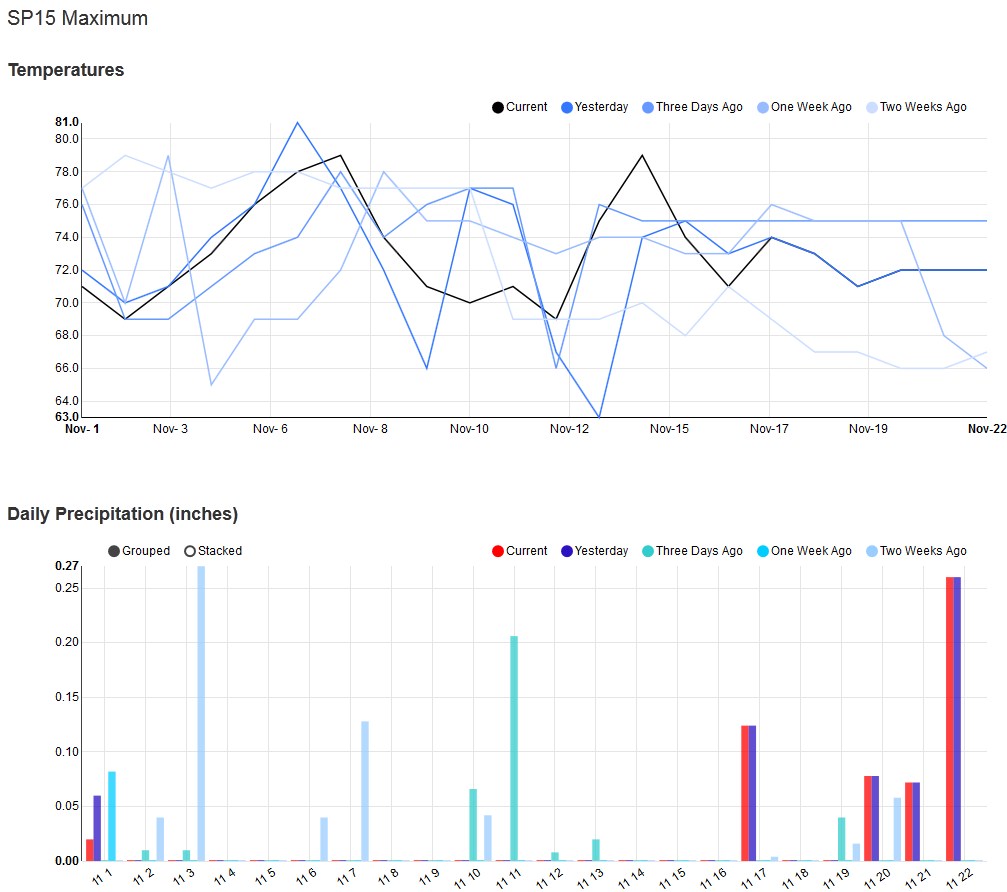 The only bullish item of note is the relatively dry 10 day out look for Mid-C, nothing is bullish at SP.  Another slightly bullish element at Mid-C is the recent uptick in exports:

I guess with all that wind there was no choice but send it south, though I find it interesting that BC Hydro set a 6 month export high on Nov 1 with nearly 1000 aMW sold into the Mid-C, strange since it corresponds to very high wind generation.

Ansergy’s short-term price forecasts have been drifting down at both SP and Mid-C for BOM:

Much of this drop can be attributed to gas prices but the fundamentals remain bearish at SP and at best mixed at the Mid-C.  Today’s STP forecast should be interesting, I will go on record as prophesying a reversal of last weeks’ cuts, or at least a partial reversal, but we’ll see soon enough.  Post STP I’ll take a look at the forwards and share with you that which I love and that which I despise.