I left off last week looking at the NWRFC 10 day forecast, focusing on what appeared to be a material cut in their forecast (versus previous 10 day forecasts AND last Monday’s STP).  That trend continues:

I’d prognosticate that the recent cuts, 500-800aMW, will be extended into today’s STP, at least for the early part of BOM and perhaps putting some much needed upward pressure on Oct (HL and LL).  I know those of you long the SP-MidC don’t want to hear that, sorry, we aren’t cheerleaders (that would be the crowd gathered around your trading desk that you call analysts), we are prognosticators.  Though there is a some signs that the cool down in kalistan was a head fake:

The most recent temperature forecasts are a few degrees higher, but that hasn’t really helped loads in the golden state: 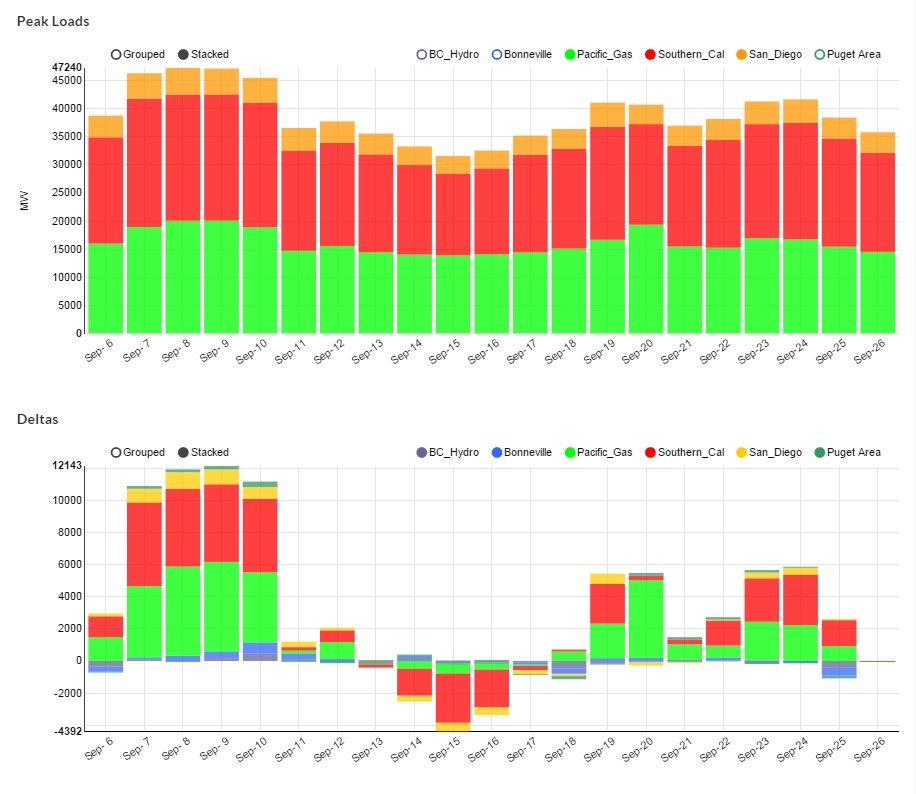 Sunday versus Sunday is off over 5,000 MW peak.  Winter is coming!  So is El Nino; the weekly index for 9/23 posted a 2.3 – contrast that with the same week in 1997 (Mother of All El Ninos) with a 2.2 and we are clearly heading into a big one that will bring plenty of surprises with the biggest being the fact that California has 10,000 MW of hydro capacity, capacity that has not run much of late.  When it rains in Southern California  it pours in an El Nino year – expect plant factors north of 50% or an additional 3-4kmw.   Add in the fact that the state is awash in renewables:

and you have a recipe for a bear’s smorgasbord.    Just how much extra water should we expect in the south and what should the haircuts look like in the north – you surely are asking?

The above table is compiled from the Ansergy 40 year stream flow data base.  Last week we formally switched 2016 from a normal water year to an El Nino.

Today is the STP update which we will post minutes after it is released.  Scott and I will also be taking a gander at the term markets and offer up our thoughts on what we like, we hate, and that which puts us to sleep.