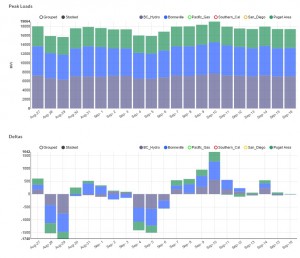 A different story in California, the incremental peak  was over 14,000 MW: 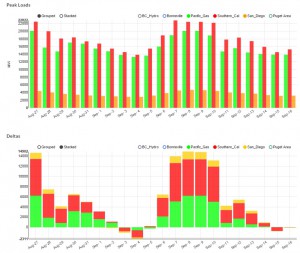 Goes to show that summer is over in the northwest but not down south.    The flip side of this seasonal cooling is the northwest is already seeing some heating load and will see more this week with Portland night time temperatures dropping into mid-40s:

The NWRFC added some more water to BOM in its latest 10 day forecasts in comparison to Monday’s STP – about 500 aMW beginning on Sep 21 – possibly bodes for another bearish STP on Monday …watch today’s 10 day for  confirmation.

Speaking of hydro, BPA continues to refill Coulee which is now at 1282: 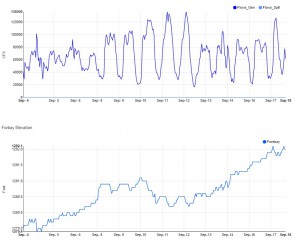 Given soft prices and re-filling reservoirs its hard to get bullish about BOM, or even Oct, especially given the resurgence of recent wind energy:

Adding to the bearish cash woes is BC Hydro’s continued relentless selling into the Mid-C:

Relentless as they are on pace to make 2015 a record year for exporting energy.  Be interesting to see what they do when the lines are cut in October … I have to think they will become buyers, but we’ll see.  The Ansergy hourly price forecast has taking a beating from the loss of load, increases in hydro, and a falling gas price.

All of this is also making some northwest utilities a lot longer than they were a few weeks back, Seattle City Light, for example:

Apparently the market agrees with Ansergy as it has pummeled October into submission …and past our forecast for the first time!

They say everything is a buy …at a price …and despite all of the bearish sentiment above … put me on record that I’d be covering Oct Shorts and going long ….this is an over-sold market that is due for a $2-4 snapback.

Look at that gap… a new record…hence my fade.  Same feelings toward the Q4 SP-MidC but you’ll have to take it into the Q to get paid.